Alcohol And Aging - How Does Alcohol Affect Aging? 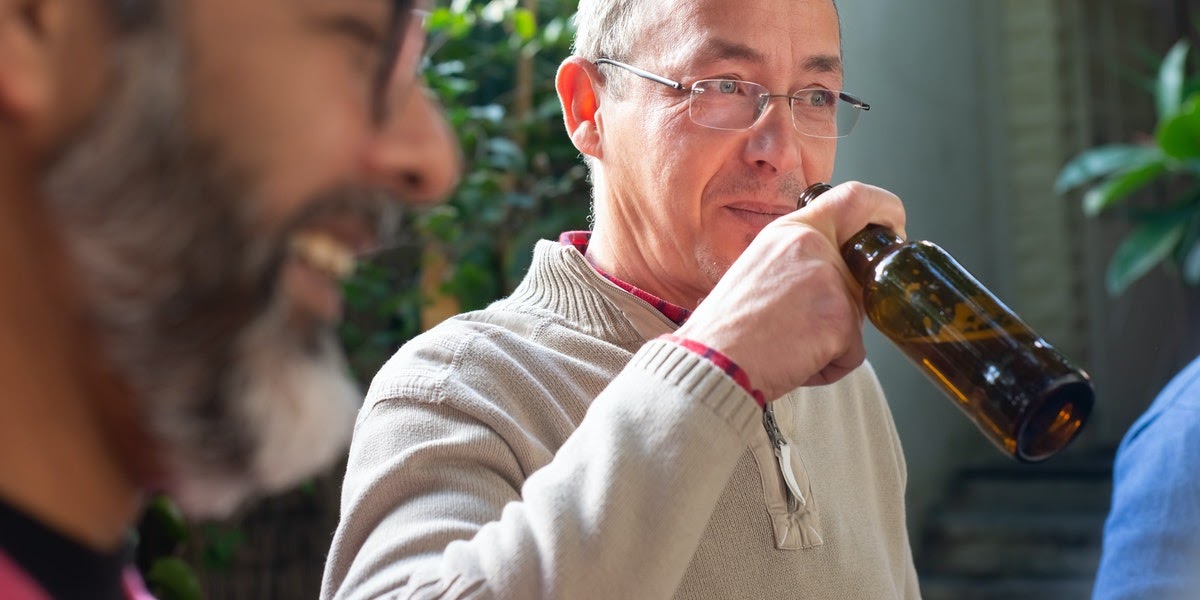 There are numerous theories connecting alcohol and aging. You need to be of legal drinking age to consume it, and it can hasten the aging process if you do.

Moderate or heavy drinking can have negative effects on several bodily systems and on mental health, especially as one ages. Indeed, it may also produce undesirable secondary effects.

It's true that getting drunk might help you feel more carefree and energized, which can give you the impression of being younger, but the next day you'll likely feel ill, tired, and old from the effects of the alcohol.

Alcohol can accelerate the aging process even in those who don't notice any immediate negative consequences.

Alcohol has a number of negative impacts on your body, including speeding up your aging process, even if you don't recognize it.

If you drink alcohol often, you may feel and appear older than you actually are due to its negative effects on the skin and the aging process.

The Effects Of Alcohol On Aging

As you probably well know, alcohol has a dehydrating effect on the body. The chemical acts as a diuretic, causing the kidneys to flush excess fluid from the body.

The hormone vasopressin is normally produced by the body and aids in water retention, reducing the quantity of fluid lost through the kidneys. When you're not drinking, this helps keep you from getting dehydrated.

Vasopressin production is suppressed by alcohol consumption. As a result, you may find yourself going to the bathroom more frequently after consuming alcohol.

Older folks tend to have a lower total body water content. Drinking water on a daily basis may make you feel older than you actually are because it is necessary for practically every body function, including blood circulation and joint lubrication.

How Does Drinking Damage The Body?

Over time, drinking an excessive amount of alcohol might cause the following:

The Effects Of Alcohol On Your Well-Being

It Can Dehydrate You

As you become older, not only does your body have less water, but for reasons that aren't entirely understood, you also feel less frequently like you need to quench your thirst. Because of this, senior citizens have a greater risk of becoming dehydrated. Consuming alcohol might cause your body to expel more water, increasing the likelihood that you will become dehydrated as a result.

It Can Dry Your Skin

Our skin gets thinner and drier as we age. The process of aging that occurs naturally is referred to as intrinsic aging, and it is not something that can be stopped. When your lifestyle and the environment cause your skin to age more quickly than it normally would, this is known as extrinsic aging.

This is where alcohol comes into play since it causes you to get dehydrated and dries up your skin. If you drink less, you'll be able to slow that down.

It Can Make Important Organs Weaker

Consuming alcohol might disrupt the normal function of certain important organs and hasten the aging process of those organs. Even moderate drinking can result in complications such as fatty liver disease. Heavy drinkers are more likely to have cirrhosis, which is a condition in which the liver is permanently damaged. Additionally, it may make it more difficult for your kidneys to perform their functions.

It Can Slow Your Brain

Every alcoholic beverage, without exception, travels "directly to your head," or at the very least, to your brain. Consuming large amounts of alcohol over a prolonged period of time can cause cell death in the brain, as well as contribute to alcohol-related brain damage (ARBD) and some forms of dementia. Issues with judgment, organization, or emotional control, difficulty keeping focused, and rage are some of the symptoms associated with this condition.

It Can Weaken Your Immune System

Consuming alcohol might impair your body's ability to ward off potentially fatal infections including TB and pneumonia. This can be a particularly problematic problem for those of advanced age.

Researchers are also investigating the potential that the immune system could be responsible, at least in part, for alcoholic liver disease by targeting healthy bodily tissues. This is something that is being looked into by the researchers.

It Can Affect Your Heart

Polyphenols are a type of antioxidant found in red wine, and research suggests that they can help lower cholesterol levels and protect blood vessels. According to the findings of certain research, it may be beneficial to your heart health if you consume it on a regular basis in moderation (approximately one glass per day). However, consuming an excessive amount can result in an irregular pulse as well as high blood pressure. Therefore, if you don't already drink, there's no use in starting now.

It Can Complicate Things

Drinking alcohol may not only increase the likelihood that you will become ill as you get older, but it also has the potential to make existing medical conditions even worse. According to a number of studies, chronic heavy drinkers are at a greater risk of developing health conditions such as osteoporosis, diabetes, high blood pressure, stroke, ulcers, memory loss, and certain mood disorders.

It Can Change How Your Medications Work

The longer you've been drinking, the longer the effects of alcohol will last in your system. Therefore, the likelihood of it being present increases when you take medication. Consuming alcohol while taking medication can have a negative impact on how well the medication works and may also cause major adverse effects.

Consuming alcohol while also taking aspirin, for instance, may increase the likelihood that the individual would experience gastrointestinal side effects or internal bleeding. It is extremely dangerous to combine this substance with certain sleeping pills, pain medications, or anxiety medications because doing so can be fatal.

It Can Keep You Awake All Night

In light of the fact that you are getting older, it is possible that the practice of having a drink in order to unwind before going to bed is not a healthy one. Alcohol, rather than lulling you into a peaceful night's sleep, may actually prevent you from falling asleep and cause you to have a disturbed sleep if you do fall asleep. This can be especially challenging for elderly people, who already have a higher risk of waking up frequently or suffering from a sleep problem such as insomnia.

Reversible Effects Of Alcohol On Aging

When an individual acknowledges that they have a problem and expresses a desire to receive treatment, it is feasible that certain indicators of aging brought on by alcohol abuse can be reversed. It is recommended to have a diet that is well-balanced in order to supply the body with the proper amount of nutrients.

In addition to this, it is vital to drink a lot of water so that the problem of being dehydrated is eliminated. Last but not least, it is imperative to see a doctor in order to have certain tests performed in order to conduct an examination of various organs and systems. For instance, if a person develops hair loss as a result of a thyroid condition that is caused by drinking, this issue may be remedied if alcohol abuse is no longer practiced by the individual.

Does Alcohol Age Your Face?

A significant correlation (p≤0.042) was found between heavy alcohol usage (defined as more than eight drinks per week) and increased upper facial wrinkles, under-eye puffiness, mouth commissures, midface volume loss, and blood vessels. Both smoking and drinking alcohol have a considerable impact, albeit a different kind, on the aging of the skin and the volume of the face.

Can You Reverse Aging From Alcohol?

Even while the effects of alcohol on your skin can be fairly severe at times, the damage caused by alcohol can typically be reversed or considerably mitigated in the majority of instances. It is possible to improve the health and appearance of your skin by making a few straightforward adjustments to your lifestyle, increasing the amount of water you drink, and making use of tried-and-true cosmetic and medical items.

Will I Look Younger If I Quit Drinking?

If you let your skin get too dry, it will lose some of its elasticity. After just one night of heavy drinking, you can wake up looking older and more wrinkled than you did the night before. Consuming alcohol on a regular basis will magnify the effect. On the other hand, once you give up drinking, you will notice that you age much more quickly.

Does Your Skin Improve When You Stop Drinking?

After a month of abstaining from alcohol, your skin will most likely have the appearance of being substantially healthier. Your skin will look more hydrated, have a more even tone, and have less edema as a result of using this product.

Even if you don't consume a lot of alcohol, the negative effects of drinking can speed up aging. Even just one night of heavy drinking can accelerate the aging process and make wrinkles more noticeable. Even while this effect is just transient, it has the potential to have long-term repercussions if it is allowed to continue.

There is no need to go it alone if you or a loved one are having trouble controlling or limiting the amount of alcohol that you consume. Regain your youthful vitality and give your body the best chance it has of remaining healthy.