Crows Are Self-Aware And May Reflect On Their Thoughts 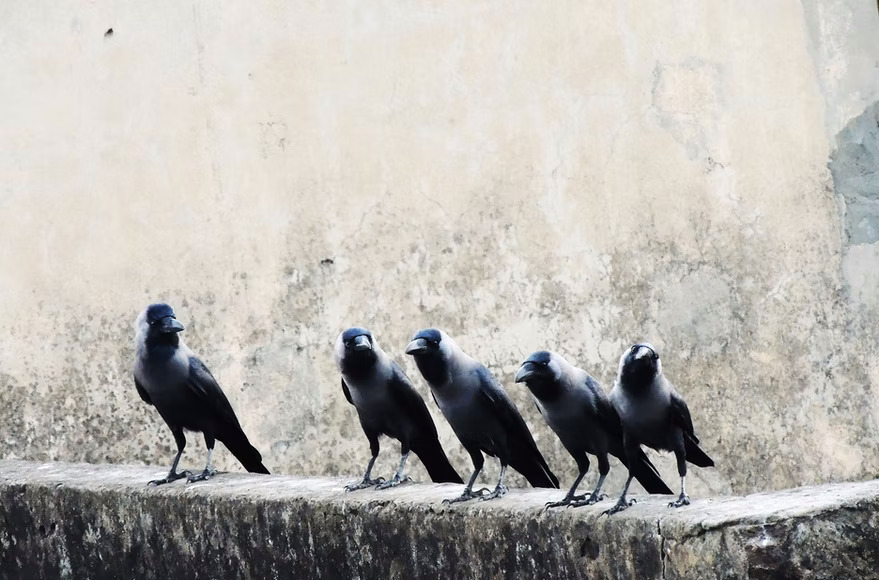 Crows are self-aware like humans and have their own form of the human cerebral brain. Crows are even more astonishingly intelligent than we previously assumed. According to a 2020 research paper published in STAT, crows and other corvids (a family of birds that includes ravens and magpies) "know what they know and can examine the content of their thoughts." This is an essential part of self-awareness, and it is shared by only a few animal species that aren't people.

Corvids like crows, ravens, and other birds of prey always have amazed scientists with their intelligence and creativity. They make tools like hooked sticks to reach grubs, solve Aesop's famous geometrical problems, or push a hedgehog across a highway before it dies.

Are Birds Self Aware?

According to a significant study published in two studies, researchers discovered that birds, including crows are self-aware, intelligent, and conscious. The two publications, published by Ruhr University Bochum and the University of Tübingen, described a newly found layout of microcircuits in avian brains comparable to the mammalian neocortex. Martin Stacho, a neuroanatomist at Ruhr University, pointed out that while mammalian and bird brains have few similarities, they share many cognitive abilities.

Andreas Nieder, a neurophysiologist at the University of Tübingen, investigated the brains of carrion crows. These clever crows (Corvus corrone) are well-known. Nieder and his colleagues set up a monitor that flashed a weak indication, comparable to the tests used to identify awareness in monkeys. They then taught two lab-bred carrion crows to move or stay stationary based on what they saw on the monitor. As a result, the neurons ignited every time the crows reacted. This, according to experts, indicates that the crows cognitively perceive the cue. Nieder refers to them as "an empirical sign of sensory consciousness in the brains of birds."

Even though bird and mammal brains evolved differently, Stacho and Nieder think that the two species' brains are wired similarly due to their shared common ancestor 320 million years ago.

How Intelligent Is A Crow?

Crows may now add another feather to their brainiac cap: studies have discovered that crows are not only fun and naughty but also clever. They employ tools to solve complex issues, and they can recall faces and reproduce noises they heard years ago. During their research, scientists found that crows know what they know and can look at the content of their thoughts, a sign of higher intellect and analytical thinking that had been thought to be only found in humans and a few other higher animals.

A second study, also in Science, looked at the neuroanatomy of pigeons and barn owls in a way that was never done before. It found clues about the foundation of their intelligence that are likely to be the same for corvids.

According to Vanderbilt University neurobiologist Suzana Herculano-Houzel, who wrote an analysis of the studies for Science, "the two papers show that intelligence and consciousness are grounded in connectivity and activity patterns of neurons" in the pallium, the most neuron-dense part of the bird's brain."Brains can appear diverse while sharing significant similarities." "How many identical traits appear may simply be a matter of scale: how many neurons are available to work?"

Crows Are Self-Aware And Know What They Know

Dr Andreas Nieder of the University of Tübingen in Germany trained two crows to peck a red or blue target on a panel depending on whether they detected a dim light. After the flash, the birds were only told whether a particular colour represented something—"red" meant seeing it, or "blue" meant not seeing it. The crows, Glenn and Ozzy, had to watch their brains figure out what they saw and inform Nieder by picking the correct target. While the birds worked, the researchers monitored hundreds of their neurons. (Crows have 1.5 billion neurons, like some monkeys.)

Over time, many neurons responded to the birds' imminent report rather than the light's brightness. The researchers stated that a population of neurons recorded the crows' subjective experiences in the experiment. The birds knew what they saw, flash or no flash, Nieder told STAT. Crows and maybe other sophisticated birds have sensory awareness, he says. "Only humans and macaque monkeys have this neurological evidence for sensory consciousness."

Herculano-Houzel said the research demonstrates neurons in the pallium of crows "have an activity that symbolises not what was given to them, but what they later describe." "Neurons" represent what the animals next report seeing, she explained. The neurons figure this out between Nieder telling the birds the rules and them pecking the target to communicate their answer. According to her, corvids are "as cognitively adept as monkeys and even big apes" since their neurons helped form their thinking.