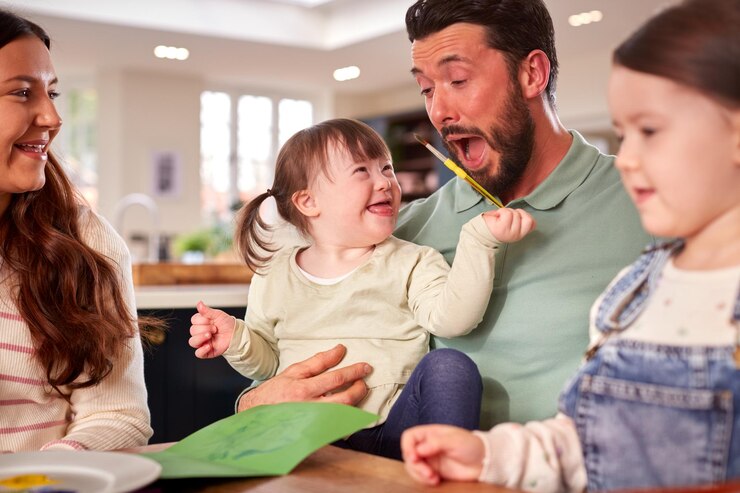 The most prevalent chromosome-related genetic disease that impairs brain and body development during pregnancy is Down syndrome in the womb. A full and happy life is possible for those with Down syndrome, despite the fact that they encounter cognitive and physical obstacles.

Exactly why some individuals are born with Down syndrome is a mystery. It may strike people of any background and any ethnicity. We do know that older mothers have a higher chance of having a kid with Down syndrome.

Pregnancy afflicted by the condition is more common in women aged 35 and over. However, most kids with Down syndrome are born to mothers under the age of 35 due to the greater fertility rates among younger women.

Diagnosis For Down Syndrome In The Womb

According to the American College of Obstetricians and Gynecologists, all pregnant women, regardless of age, should be given the choice of undergoing Down syndrome screening and diagnostic testing.

The probability that a pregnant woman is carrying a child with Down syndrome may be determined via screening testing. However, these methods cannot diagnose Down syndrome or determine with certainty if a newborn has the disorder.

If you suspect that your newborn has Down syndrome, you may get him or her tested. Examine the pros and cons, potential benefits and dangers, and interpretation of your test findings with your doctor. Your doctor could suggest seeing a genetics counselor if they feel it's necessary.

Prenatal treatment now often includes a test for Down syndrome. The results of a screening test can only give you a general idea of how likely it is that your unborn child will have Down syndrome, but they may guide you in choosing between more specialized diagnostic procedures.

Both the combined first trimester test and the integrated screening test are examples of screening procedures.

The blood test (HCG) determines levels of human chorionic gonadotropin (HCG) and pregnancy-associated plasma protein-A (PAPP-A) in pregnancy. If your PAPP-A and HCG levels aren't normal, it might indicate trouble for your unborn child.

A test must be performed in order to check for nuchal translucency. During this test, an ultrasound is used to measure a specific area on the back of your baby's neck. In medical terms, this is a nuchal translucency screening. Increased fluid accumulation in this neck tissue is a common sign of problems.

Your doctor or genetic counselor can calculate your chance of having a child with Down syndrome based on your age, the results of the blood test, and the ultrasound.

Both the first and second trimesters of pregnancy are required to complete the integrated screening test. The probability that your baby will be born with Down syndrome is then calculated using all of the information.

In the first stage, a blood test for PAPP-A and an ultrasound to detect nuchal translucency are used during first three months of pregnancy. The four pregnancy markers during econd trimester measured by the quad screen are alpha fetoprotein, estriol, human chorionic gonadotropin, and inhibin A.

More definitive testing may be warranted if a screening test returns a positive or concerning result, or if you are at an increased risk of having a child with Down syndrome. You should discuss the benefits and risks of these exams with your doctor.

There are a variety of diagnostic procedures available for determining Down syndrome.

Couples who undergo in vitro fertilization and are at high risk of passing on a genetic disease have the option of having a preimplantation genetic diagnosis. Before implantation, the embryo is screened for genetic defects.

Types Of Down Syndrome In The Womb

Down syndrome manifests in three distinct phenotypes. Because of how similar they look and act, sometimes you can't tell one type from another without looking at their chromosomes.

This subtype of Down's syndrome affects just around 3% of the population. 2 This happens when an additional segment of chromosome 21, or perhaps a whole extra chromosome 21, gets joined to, or "trans-located" to, another chromosome instead of being a standalone chromosome.

Causes Of Down Syndrome In The Womb

Incorrect cell division during embryonic development is the root cause of Down syndrome. Human development is programmed into small bundles called chromosomes, which are housed within each cell of our body. Each of a person's cells typically has 23 separate sets of chromosomes.

These pairings fail to properly divide, leading to an extra copy of chromosome 21 in patients with Down syndrome. This results in 47 chromosomes in the baby's cells instead of the typical 46, which has consequences for both physical and mental growth.

Missegregation of chromosomes has no identifiable cause. It has nothing to do with the parents and happens by chance during conception (when the egg is fertilized by the sperm).

Anyone can have a baby with Down syndrome, although the odds grow with the mother's age. About 1 in 700–900 newborns are diagnosed with this condition. More than 15,000 Australians, of various racial and socioeconomic backgrounds, have Down syndrome.

Symptoms Of Down Syndrome In The Womb

Those affected by Down syndrome may display a wide range of behavioral, mental, and physiological problems.

Down syndrome may manifest itself in a variety of ways physically.

A few examples of typical Down syndrome-related cognitive and behavioral difficulties are:

People with Down syndrome may or may not exhibit any or all of these signs. Each individual experiences symptoms differently, and the intensity of those symptoms varies as well.

Treatment Of Down Syndrome In The Womb

Even though there is no treatment for Down syndrome that can reverse its effects, there are many ways for people with the disorder and their loved ones to get help. The developmental milestones of children with Down syndrome are commonly on par with those of typically developing children of the same age.

They may develop at a slower rate than average, however. An education is essential for every kid, regardless of intelligence, and this includes those with Down syndrome.

People with Down syndrome and their families are supported by public and private institutions that provide inclusive classrooms and specialized instruction for those with the condition. Students with Down syndrome gain a lot from school activities that give them chances to talk to other people and learn useful job and social skills.

At What Stage Of Pregnancy Does Down Syndrome Occur?

Ultrasound and blood tests conducted during the first trimester of pregnancy may detect Down syndrome as early as 11 to 14 weeks. A blood test called the multiple marker serum screening test may also be used for screening between the ages of 15 and 20 weeks.

How Does A Baby Get Down Syndrome In The Womb?

Can Down Syndrome Be Detected In The Womb?

Chorionic villus sampling is one diagnostic technique that may be used to rule in or rule out Down syndrome (CVS). Placental cells are harvested for chromosomal analysis in CVS. For most pregnancies, this screening takes place somewhere between weeks 10 and 13 of pregnancy.

An extra chromosome causes the Down syndrome in the womb. The vast majority of people with Down syndrome live in family homes or independently, attend regularly integrated schools, learn to read and write, take part in community activities, and hold down paid employment.

There is no reason why a person with Down syndrome shouldn't have a successful and happy life.