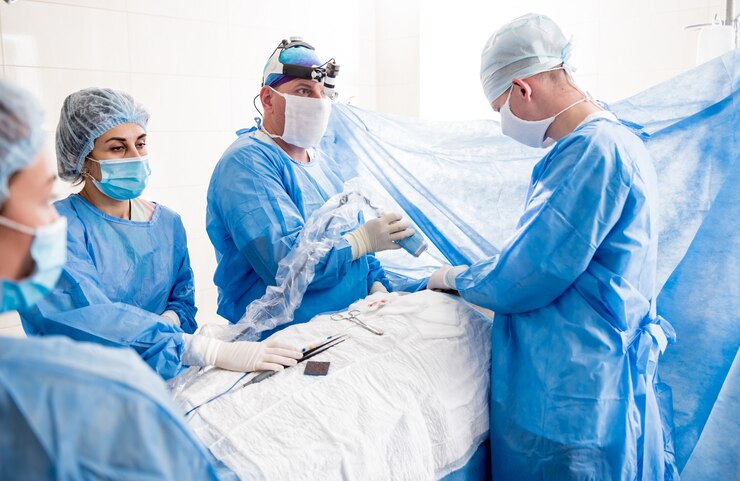 Fluorescence guided surgery is an imaging technology that enables the surgeon to see structures and kinds of tissue that may not be apparent under white light settings during a surgical operation.

Because of the many potential advantages of fluorescence guided surgery over more traditional clinical imaging techniques, such as higher contrast and sensitivity, less personal use, and ease of instrument operation, research interest in fluorescence-guided surgery continues to grow across a variety of key areas, including fluorescent probe development, surgical system development, and potential clinical applications.

In its most basic form, the fluorescence-guided surgery system will consist of a light source and associated filters for excitation of the fluorescence contrast agent, which is often provided before surgery.

The emitted fluorescence signal from the probe is then collected by removing unwanted signals such as excitation light and autofluorescence by first passing the light through appropriate emission filters, followed by collection optics to focus the signal on the detector, where it is transferred to an attached computer for visualization.

Every component in an imaging system impacts the final picture quality in various ways and in varying degrees; therefore, careful thought is necessary depending on the system's use.

The FDA has approved roughly 20 fluorescence-guided clinical imaging devices for use in the clinical setting, which usually falls into handheld imaging systems, endoscopic-based systems, and surgical microscopes.

All of them are intensity-based rather than lifetime-based. Fluobeam, which has been used in research applications since 2009, is one of the most advanced FDA-approved systems.

Fluobeam is a portable imaging device with a Class 1 laser beam at 750 nm and emission collection from 800 nm onwards for use with Indocyanine Green in applications such as thyroid and lymphatic surgery.

The da Vinci system is another well-established, endoscopic-based device that incorporates the Firefly fluorescence visualization capabilities and is also intended to function with Indocyanine Green.

In reality, most presently certified systems are intended to function with Indocyanine Green, with excitation occurring at 805 nm and emission captured from 820 onwards.

These systems are often totally enclosed, making access to the optics that need to be updated impossible. Fluobeam can also be used to utilize Methylene Blue fluorescence. Quest Medical Imaging has developed the Quest Spectrum, which can be used for applications utilizing both Methylene Blue fluorescence and Indocyanine Green by incorporating two imaging channels, demonstrating greater versatility than other systems.

The Leica M530 surgical microscope is an even more versatile system, with many accessory modules that can be incorporated into the system for visualization of fluorescence at various wavelengths, including those required for Indocyanine Green and fluorophores with emissions above 450 nm and 510 nm.

Use In Clinical Systems

There is a continual demand for fluorescence-based clinical imaging systems that can work with both authorized fluorophores and those presently under development. Imaging systems may employ a probe's fluorescence intensity, lifespan, wavelength, polarization, and other features in surgery.

The key instrumentation components for using fluorescence in surgical systems are primarily based on well-established technology and methodologies for fluorescence spectroscopy and microscopy and consist of an excitation source, a fluorescent probe, excitation and emission filters, and the fluorescence detector.

Broadband light sources such as xenon lamps, light emitting diodes, and laser diodes are often excitation sources in fluorescence imaging systems. They may not be suitable for use with fluorophores with a tiny Stokes shift, which will need the help of further excitation filtering.

Light emitting diodes are more durable since they do not need a warm-up time and emit across a smaller bandwidth, allowing them to be selected based on the fluorophore being worked with.

Ti: sapphire laser technology has dominated time-resolved fluorescence research for many years, but a white-light supercontinuum laser is another viable source that has not been widely used.

Supercontinuum lasers have a wide spectral range from 400 nm to 2 m and very high intensity. They are also much more expensive than light emitting diodes and are not as small, although they may be employed more in future fluorescence guided surgery systems.

The selection of excitation and emission filters enables precise wavelength selection and discrimination of undesirable signals from a sample. When using white light sources, excitation filters may be necessary, while emission filters are utilized to confine the fluorescence signal captured to the spectral region of interest.

Another element to consider when selecting emission filters is the Stokes shift of the fluorophore to be used with the system.

The fluorescence signal gathered from the system is focused onto the detector using collection optics. The optics used will most likely be determined by the desired field of vision, which may be modified by the size of the fiber bundle or light guide.

The kind of detector utilized will also impact the optics selection since the sensor will determine the amount of focus needed.

Detectors provide the advantages of detecting photons at the single photon level. A detector's quantum efficiency and intrinsic gain often determine its ability to detect single photons. If a detector was 100 percent efficient, it could create one electron for every photon observed.

Photomultiplier tubes were the first devices to detect single photons. In most cases, photomultipliers use the photoelectric effect, in which light photons enter the input window and are absorbed by a photocathode.

Charge-coupled devices (CCDs) are a better option for photomultiplier tubes, especially for clinical applications. Electron multiplying-CCD cameras allow on-chip amplification of the signal and bypass readout noise to retain high sensitivity at fast speeds. The primary benefit of electron multiplying-CCDs over photomultiplier tubes is their ability to provide live imaging.

A single-photon avalanche diode is a photodiode with a reverse biased p-n junction at a voltage greater than its breakdown voltage. When a single photon hits the active device, it generates an electron-hole pair, which starts a self-sustaining avalanche of carriers. The QuantiCam, built by Robert Henderson's team in Edinburgh, is an example of a single-photon avalanche diode array for fluorescence lifetime imaging microscopy.

What Is Intraoperative Fluorescence?

What Is The Purpose Of Image Guided Surgery?

Image guided surgery is intended to assist doctors in pinpointing the brain tumor. Doctors must accurately locate and remove the brain tumor for doctors to maintain the patient's brain functioning following surgery.

How Does Fluorescence Guided Surgery Work?

Fluorescence guided surgery (FGS) is an imaging technology that enables the surgeon to see structures and kinds of tissue that may not be apparent under white light settings during a surgical operation.

There is still much interest, and promise in fluorescence-based surgery approaches for many surgical applications. The capacity to employ fluorescence to detect information at the molecular level is an obvious benefit for incorporating it into ordinary clinical practice.

Fluorescence may be best employed in the surgical setting as a supplement to current surgical procedures rather than completely replacing them. Bridging the gap between these two sectors will also be critical to advancing fluorescence-guided surgery.