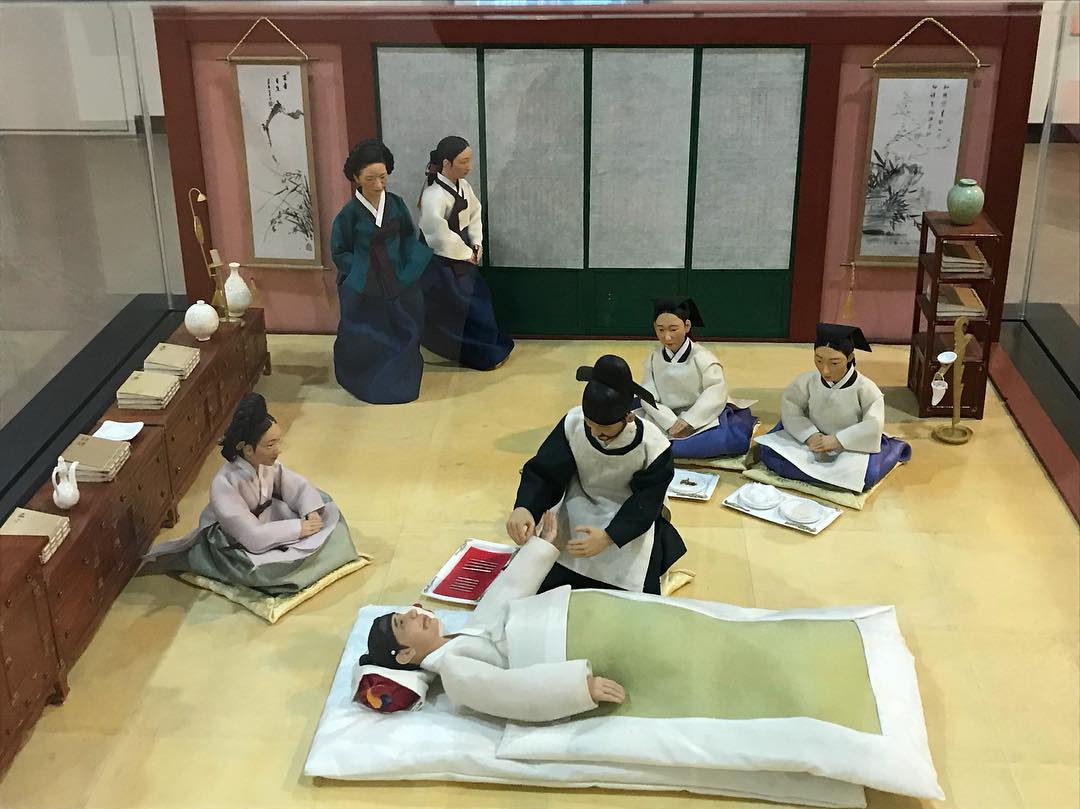 The latter is the moniker of American kickboxer and mixed martial artist (MMA) Dustin Jacoby.

Jacoby’s grandmother would call him and his twin brother, Darren, as “little hanyaks” when they’re kids, according to Sportskeeda.

The 34-year-old MMA fighter explained that “hanyak” refers to a particular Polish soldier, the type who is aggressive and inappropriate in behavior.

For the Koreans, however, the word “hanyak” elicits positive feelings as it pertains to their traditional way of treatment.

In the 1930s under the Japanese occupation, Korea experienced what one scholastic paper described as “the Eastern medicine renaissance.”

The said paper, published by the journal Social History of Medicine in 2020, stated that Korean physicians from that era proved that Eastern medicine could go head-to-head with Western medicine.

According to a 1989 paper published by the journal Social Science & Medicine, the Korean term “hanbang” refers to the “traditional Korean medical care system.”

A 2022 article from Medical News Today explains that while hanbang embodies traditional Korean medicine in a broader scope, hanyak stems from it.

From the World Health Organization (WHO), traditional medicine gets a detailed definition:

It is the sum total of the knowledge, skill, and practices based on the theories, beliefs, and experiences indigenous to different cultures, whether explicable or not, used in the maintenance of health as well as in the prevention, diagnosis, improvement or treatment of physical and mental illness.

A shorter way of saying it:

Traditional medicine refers to the ancient ways of treating sickness in the body despite the absence of scientific backing or proof.

Based on its “Traditional Medicine Strategy 2014-2023,” the WHO acknowledges the importance of traditional medicine, recommends it, and even encourages governments to support it.

In fact, WHO launched the “Traditional Medicine Program” way back in 1977.

As for Eastern medicine in Korea, it’s a tale as old as time.

The Koreans have been practicing hanyak for over 2,000 years, according to the paper “Historical Medical Value of Donguibogam” (2016), published in the Journal of Pharmacopuncture.

The 25-volume “Donguibogam” has since been regarded as “the ‘bible’ of Oriental medicine.”

South Korea is one of the countries with a national policy on traditional and complementary medicine (T&CM), based on a 2019 WHO global report on T&CM.

“Complementary medicine” is just another term for “alternative medicine.”

Included in the said plan was the move to create “standardized clinical practice guidelines” for traditional medicine clinics practicing hanyak.

The guidelines would be for “30 diseases including . . . cancer, infertility, obesity.”

All in all, according to the Arirang report, Korea aims for the “development and globalization” of hanyak.

In fact, KIOM published the “Donguibogam” and other reading materials related to traditional Korean medicine in English, Russian, and Spanish.

Below are some forms of hanyak:

Research studies reveal that different countries, both in the East and in the West, have been practicing cupping therapy since time immemorial.

It’s mentioned in “Ebers Papyrus” (around 1550 B.C.), an Egyptian record of traditional medicine, according to one paper published in the Journal of Traditional and Complementary Medicine in 2015.

Cupping is a simple application of quick, vigorous, rhythmical strokes to stimulate muscles.

As its name suggests, cups (round or bell-shaped; glass, silicone, or wooden) are placed upside down on a person’s back.

A hanyak practitioner will burn something (e.g., herbs) inside the cup. A cup gets immediately placed as soon as the fire is gone.

Per WebMD, the cups will be left on the skin for three minutes.

Based on a study published in the Journal of Acupuncture Research, the material the cup is made of and its size affect the pressure that will be created during the cupping.

For the Center for Integrative Medicine of the UC San Diego School of Medicine in California:

Acupuncture is a 3,000-year-old healing technique of Traditional Chinese Medicine.

In acupuncture, very thin needles are inserted at certain points – the so-called acupuncture points/acupoints – of the body to stimulate them for healing.

According to UC San Diego, it was in 1997 when the U.S. National Institutes of Health (NIH) publicly acknowledged acupuncture as safe and effective.

That’s based on a paper that conducted an acupuncture-versus-morphine trial and was published in the American Journal of Emergency Medicine in 2016.

In addition, while 85 patients who were given morphine experienced “minor adverse effects,” only four patients who received acupuncture did.

China, Japan, and Korea are the countries known for acupuncture.

In hanyak, what makes Korean acupuncture distinct is that it only involves four needles. This method or technique is known as the Sa-am (also spelled as “Sa-Ahm”) technique, aka the four-needle technique.

A Korean monk named Sa-Ahm (or Sa-am Do-in), who lived during the Joseon Dynasty, founded it.

Such imbalance could badly affect, among other things, a person’s blood pressure, digestion, and heart rate.

In the said paper, Sa-am acupuncture was able to prevent an imbalance in those nurses working on the night shift who received it.

Acupuncture can treat a certain kind of tumor that grows among dogs.

Based on a case report published in the Journal of Acupuncture and Meridian Studies in 2017, acupuncture was used to treat oral fibrosarcoma (oFSA), a kind of cancerous tumor in dogs.

Another form of hanyak is the Korean Hand Acupuncture Therapy (KHT), which started in 1971.

According to one study published in Hanyang Medical Reviews in 2010, KHT aims to prevent a kind of imbalance that can affect the blood flow in the brain.

KHT has no side effects.

The papers mentioned here are merely some of the numerous studies undertaken to test the efficacy of Korean acupuncture.

That’s according to a paper published in Evidence-Based Complementary and Alternative Medicine in 2005.

Those studies attested that hanyak – acupuncture and moxibustion in particular – can improve the condition pertaining to several kinds of ailments.

This one is recommended for musculoskeletal disorders (MSDs).

MSDs affect (for one, they cause pain to) bones, joints, and muscles.

According to a paper published in the journal Integrative Medicine Research in 2014, in Korea, Chuna was first practiced in 1445.

In 1996, South Korea offered a formal training course in Chuna for the first time.

Together with traditional practices, today’s Chuna therapy employs knowledge in the following:

The paper stated that Chuna also incorporates a combination of these forms of alternative medicines from different countries:

Chuna therapy is not just about fixing the bones. It boosts natural healing by restoring balance in the body.

According to Arirang, the American Optometric Association (AOA; est. 1897) includes Chuna therapy in its curriculum.

It is believed that people have been doing moxibustion since 500 B.C., according to Cleveland Clinic.

This form of hanyak involves the use of mugwort (Artemisia vulgaris), a kind of flowering plant.

The mugwort leaves will be dried and rolled to take the shape of cones or sticks. These cones or sticks (they appear like an incense) are called moxa.

Moxibustion starts with the lighting or burning of the moxa.

The lighted/burning end of the moxa will be held close to the skin so that its heat will stimulate acupressure points/acupoints in the body.

Performing moxibustion with acupuncture can increase its effectiveness.

Moxibustion is not for people:

A research study published in Evidence-Based Complementary and Alternative Medicine in 2014 identified getting burned as one of the risks involved in moxibustion.

The general rule when it comes to hanyak is to get it from licensed and well-experienced practitioners only.

In the early years of the new millennium, interest in hanyak from abroad was already seen.

For one, in April 2004, Johns Hopkins University in Maryland made an agreement for research collaboration with Kyung Hee University in Seoul, reported Arirang.

The College of Korean Medicine of Kyung Hee University is regarded as South Korea’s top school for traditional Korean medicine.

Dr. Adrian Sandra Dobs, an endocrinologist and professor at the said school, said that Western medicine couldn’t treat several diseases. They would want to know if traditional Korean medicine could do so.

The key in making these traditional methods to work wonders is integration.

In a 2011 interview with Voice of America, Dr. Raimund Royer, an Austrian physician at the Jaseng Hospital of Korean Medicine, said that they combine hanyak with modern medical treatment.

Dr. Royer, a board member at the Association of Korean Oriental Medicine (AKOM) said:

I think . . . it’s a very good and . . . future-pointing kind of approach to combine, to integrate both the Western diagnostic system and the traditional treatment system.

Additionally, as Dr. Kim Ha-neul said to Arirang, one great thing about hanyak is that it’s “free from side effects.”

This integration of Western medicine with traditional Korean medicine, plus the assurance of no side effects make hanyak appealing to anyone seeking relief or cure from their illnesses.