Hernia Surgery- The Clinical Anatomy Of The Abdominal Wall 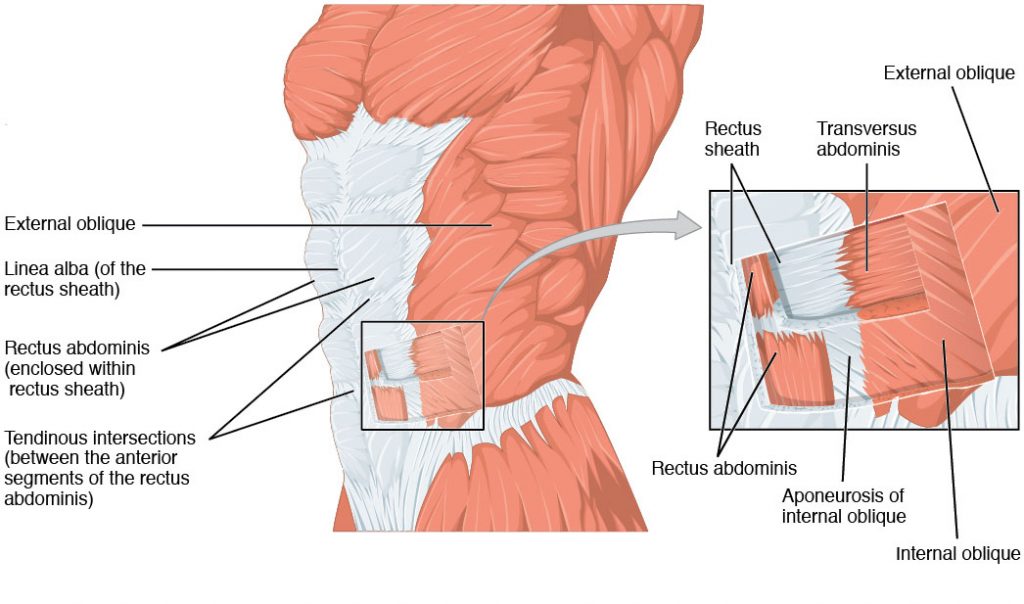 The anterior abdominal wall is shaped like a hexagon. The costal margin and xiphoid process form the superior border, while midaxillary lines form the lateral border.

This article will go over the clinical anatomy of the abdominal wall in hernia surgery.

Soft tissue and muscle make up the layers of the abdominal wall. Above and below the umbilicus, the superficial fascial layers vary. The fused Camper and Scarpa fascia form a single layer above the umbilicus; however, these layers are separated below the umbilicus. The fatty outer layer of the camper fascia connects to the superficial thigh fascia and extends inferiorly into the labia majora in women and the scrotum in men. The membranous inner layer of the scarpa fascia fuses inferiorly with the fascia lata of the thigh and continues posteriorly to the perineum, where it is known as Colles fascia.

The rectus muscle is surrounded and supported by the anterior and posterior rectus sheaths, which are frequently used and manipulated in abdominal hernia repair and reconstruction. Important surgical landmarks are the linea alba and linea semilunaris. The linea alba is a fusion of the anterior and posterior rectus sheath that runs from the xiphoid process to the symphysis pubis in the midline. Because it allows quick and easy access to the abdominal cavity, the linea alba is often used for surgical incisions. The fusion of the external and internal oblique muscles, as well as the transversus abdominis, forms the linea semilunaris, which is the rectus muscle's lateral boundary.

Zone I encompasses the upper and mid-central portions of the abdominal wall and is defined by the xiphoid process and medial costal margins on the superior side, the linea semilunaris on the lateral side, and the inferior edge of the umbilicus on the inferior side. The deep superior and deep inferior epigastric arteries, which converge between the xiphoid and the umbilicus at a point between the xiphoid and the umbilicus, supply blood to this zone; of the two, the inferior artery is the dominant vessel. The superior epigastric artery begins where the lateral thoracic artery splits around the sixth rib. The external iliac artery gives rise to the deep inferior epigastric artery, which travels medially through the posterior rectus sheath halfway between the pubis and the arcuate line before passing through the posterior rectus sheath.

Both the superior and deep inferior epigastric arteries run deep into the rectus abdominis muscle, anterior to the posterior rectus sheath, and supply blood to the muscle as well as the overlying skin and subcutaneous tissue via musculocutaneous perforators. Medial and lateral perforators are two types of perforators. They can be found in longitudinal rows parallel to the abdominal wall.

As they cross the midline, medial perforators tend to have a larger vascular territory, whereas lateral perforators are restricted to one side of the abdomen. When it comes to choosing an incision type and a method of repair, understanding these perforators is critical. The medial perforators that cross the midline will be disrupted by the common midline incision, limiting collaterals in zone I. Because much of the blood supply to this region is dependent on these musculocutaneous perforators, when the subcutaneous tissue is separated from the anterior rectus sheath, such as during an external component separation, the blood supply to this anterior tissue is harmed.

Zone II is made up of the lower abdominal wall. It runs the length of the anterior abdominal wall to its lateral border at the midaxillary line and is bordered superiorly by the inferior edge of the umbilicus (the inferior border of zone I). The lower edge of the abdominal cavity forms its inferior border. The epigastric arcade, superficial inferior epigastric, superficial external pudendal, and superficial circumflex iliac arteries are the blood vessels that supply this zone. The deep circumflex iliac artery, which supplies a portion of the skin in zone II, is a major component of the zone III blood supply. The anterior superior iliac spine is posterior and cephalad in this region.

The lateral abdominal wall, which is bordered superiorly by the costal margin, medially by the linea semilunaris, and laterally by the midaxillary line, makes up Zone III. The musculophrenic, lumbar, and lower intercostal arteries all supply blood to this zone, with the latter originating from the deep circumflex iliac artery. At its bifurcation, the internal thoracic artery's musculophrenic artery is the second branch. It passes behind the seventh, eighth, and ninth ribs, providing large branches to the intercostal arteries before joining the lumbar artery, which supplies the lateral abdominal wall. Between the transversalis and the internal oblique muscles, the lumbar and lower intercostal arteries are located.

A ventral hernia is a hole or disruption in the abdominal wall that can be classified as either primary (occurring for the first time) or incisional (hernias caused by previous incisions and surgery). Hernias most commonly occur in the linea alba, which is a weaker area of the abdominal wall with no muscle. Incisional hernias, on the other hand, can develop in any part of the abdomen. A number of technical and patient factors can contribute to the development of an incisional hernia.

Laparoscopic and open approaches are the two major surgical techniques described for repairing a ventral hernia. In most cases, mesh should be used because it lowers the recurrence rate of ventral hernias.

Because of the location of the mesh or the need for separations or releases of any of the abdominal wall components, an open ventral hernia repair is usually required. Mesh repairs are divided into three categories: onlay, bridge, and sublay, with the type of repair determined by the location of the mesh in relation to the hernia. While the benefits of onlay and sublay techniques are still debated, most surgeons agree that bridge repairs with mesh have an unacceptable hernia recurrence rate and should only be used in exceptional cases.

What Is Abdominal Wall Hernia Repair?

Abdominal wall reconstruction is a complex surgical procedure that restores the abdominal wall's normal function. It is recommended for patients who have advanced hernias and necessitates specialized surgical knowledge. These hernias are prone to recurrence and complications if not treated properly.

What Happens To The Abdominal Wall Hernia?

Which Part Of The Body Is Hernia Operation Done?

An incision, or cut, is made in the groin during open hernia repair. The bulging intestine is identified within the hernia "sac." The hernia is then pushed back into the abdomen, with stitches or synthetic mesh used to reinforce the abdominal wall.

What Is The Anatomy Of Hernia?

Organs push through weak muscle surrounding the body cavities where they are located, resulting in a hernia. Hernias of the abdomen, chest, and groin are all common. They can also appear in other parts of the body, particularly in surgical scarred areas.