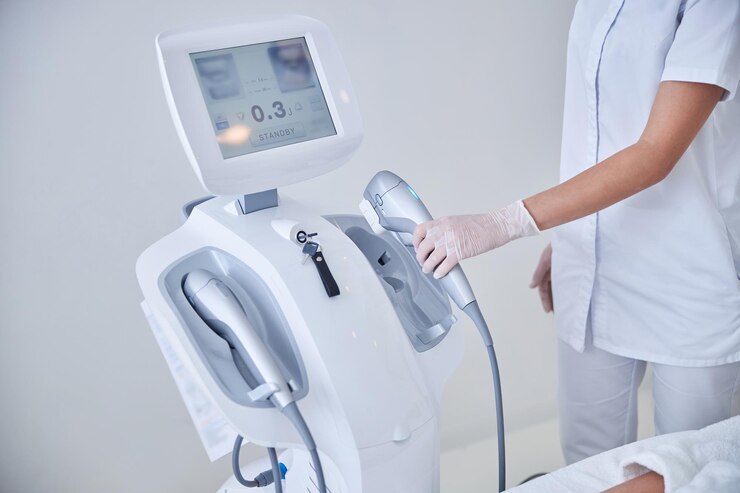 Because of the rapid growth of high-intensity therapeutic ultrasound applications, there is an urgent demand for accurate measurements of fundamental acoustic parameters and field characteristics. The dependability of high-intensity therapeutic ultrasound field characterization is critical since quality control assurance for the modality is still difficult.

Researchers all across the globe are working to develop a standard for field characterization of high-intensity therapeutic ultrasound systems at or near maximum clinical output power. This article examines the state-of-the-art in ultrasonic field characterization methods, emphasizing the commonalities between them.

Measurement Of The Pressure Field

The output of a hydrophone is the convolution of the acoustic pressure waveform and its intrinsic system impulse response. An accurate hydrophone would have a consistent frequency response across a broad bandwidth, making it an excellent point receiver.

It would have a high sensitivity to reduce the influence of measurement noise on the uncertainty of findings, as well as a linear dynamic range large enough to identify the peak pressure amplitudes.

However, meeting all of these somewhat contradictory requirements at the same time is unachievable, and appropriate compromises must be established.

Heat production from absorption in any underlying structure might pose further issues, such as depolarization of the piezoelectric parts.

Thus, researchers have created many hydrophones to increase the measuring capabilities and durability of the hydrophone against high sound intensities and pressures.

Needle hydrophones are typically made and composed of a disc-shaped active element held at the tip of a needle-like structure. Piezoelectric ceramic or polyvinylidene fluoride are the most often utilized materials for needle hydrophone-sensitive components.

Although the unpredictability of ceramic frequency response may be mitigated, radial resonances should also be addressed with polyvinylidene fluoride-based sensors.

A projectile-like capsule-type hydrophone has been devised to lessen the disruption of diffracted edge waves. A metallic coating was applied to the small piezoceramic sensing element.

The coating thickness was planned to be between 20 and 70 microns to provide a balance between acoustic responsiveness and 'blast protection. The hydrophone's performance stays steady with compressional and rarefactional pressures up to 30 MPa and a pulse burst of 350 cycles.

Membrane hydrophones consist of an acoustically transparent polyvinylidene fluoride membrane stretched across an annular frame of internal diameter, typically approximately 100 mm. The major advantage of membrane hydrophones is the broadband and smooth frequency response, which makes them a preferable device for characterizing pulse pressure waveforms.

One method to protect the electrodes from the erosion effect of cavitation is sandwiching the thin membrane between layers of glycerin, which may result in non-flat frequency response. Physikalisch-Technische Bundesanstalt has also developed a robust spot-poled membrane hydrophone for high-intensity therapeutic ultrasound fields characterization.

This hydrophone is reported to have a relatively flat frequency response of up to 15 MHz and can withstand acoustic pressure up to 100 MPa under pulse excitations.

Different protection systems have been used for the rear side of the hydrophone, such as a polymer film protection layer and polyurethane backing in connection with a ring design.

This hydrophone can characterize high-intensity therapeutic ultrasound fields with peak compressional and rarefactional pressures of 75 MPa and 15 MPa, respectively. It uses highly viscous silicone oil with a high cavitation threshold as a liquid backing material.

The sensitivity can be adjusted to the desired pressure amplitude range of detection by modifying the design of the integrated preamplifier.

The brittle electrode pattern and cavitation-induced erosion of the piezoelectric element are widely accepted causes of hydrophone degradation in hostile ultrasonic environments.

One option is to utilize protective layers to boost the robustness against cavitation inside robust needle and membrane hydrophones.

An approach is to use a reflector to disperse the incoming acoustic waves and then detect the scattered field to avoid exposing the sensitive part to the strong field fully.

Using scattering theory, the hydrophone was invented to detect acoustic pressure in the focus zone.

The scatterer is a fused silica optical fiber with a protective outer polyamide covering that may be recut and replaced when damaged.

According to the manufacturer, the receiver array has an adequate sensitivity of 318 dB (1 mV Pa1) before pre-amplification and a bandwidth of more than 15 MHz.

Piezoelectric hydrophones are subject to right refractive interference and have a limited effective sensitivity area when used to measure ultrasonic fields. Concerns about the hydrophone's capacity to endure the corrosive environment found in high-intensity therapeutic ultrasound fields have been raised.

The fiber-optic hydrophone was used to characterize the shock wave fields of lithotripsy. The displacement of the fiber tip caused by a shock wave might reach several optical wavelengths, resulting in significant phase modulation.

Fiber sensors based on optical resonators are a possible alternative to the two-beam interferometer setup. The creation of micron-scale resonators allows the whole sensing system to be miniaturized. Fabry–Perot hydrophones have an excellent spatial resolution of 10 m and a large bandwidth of over 50 MHz.

A multilayer optical fiber optic sensor has been created with a smooth frequency response across a wide frequency range of 1 MHz to 75 MHz. It also features peak-compressional acoustic pressure linearity of up to 37 MPa and less than 5% derivations.

Receiving hydrophones should have comparable directivity patterns as emitters, according to reciprocity.

These models agree well at larger kB values and for small angles of incidence. The 'rigid piston' model may accord better with the experimental data for small-probe-type hydrophones.

The noninvasive and efficient characterization of ultrasonic fields is of interest, and optical-based detection methods may provide a better answer.

The probe light in free space optical detection methods is sent in free play rather than restricted in optical fibers as in fiber optic detection techniques.

Refractometry-based approaches are categorized into intensity demodulation and light diffraction tomography, depending on the transduction mechanism used to detect optical changes caused by ultrasound.

The localized heating impact of high-intensity therapeutic ultrasound fields in a plane of interest may be captured via thermal imaging. As a result, it is a possible substitute for hydrophone scanning. Thermal imaging employs an infrared camera to measure the temperature distribution caused by absorbing ultrasonic waves on tissue-mimicking material.

The goal of temperature monitoring is to determine the geographical distribution of time-averaged intensity in the high-intensity therapeutic ultrasound field. The main challenge of this technology is the convective heat transfer between the air and the absorbent substance.

Later, the model was tested experimentally and compared to hydrophone measurement findings, with the agreement dependent on the transducer's focal gain.

The top acoustic pressure limit was set at 3.8 MPa, which was believed to be within the linear acoustic range. Other quantitative approaches for infrared thermography include using a hydrophone to link temperature increase with pressure distributions obtained from a hydrophone.

The thermal distribution over the area of interest may be acquired by moving the infrared camera and tissue-mimicking material along the acoustic axis using an automated stage.

These optical technologies can potentially measure the near-field hologram or 3D pressure distribution faster than scanning a hydrophone, and the notion of combining measurement and modeling can then be used.

Optical systems based on acousto-optical interactions may suffer from weak interactions and have a dynamic range confined to comparably low acoustic pressure.

Meanwhile, evanescent waves may be ignored in Rayleigh integrals without losing essential information, and the angular spectrum is computationally more efficient.

What Is Therapeutic Ultrasound Good For?

Your physical therapist may utilize therapeutic ultrasound to deep heat soft tissue and enhance blood flow to certain tissues. In theory, this might improve healing and reduce discomfort.

High-intensity focused ultrasound has a very good safety profile. The risk of skin burn is the most serious. Cooling devices and treatments are utilized to protect the skin throughout the treatment procedure to reduce this danger.

What Is Considered High-Intensity Ultrasound?

High-intensity focused ultrasound is a non-invasive therapy that employs concentrated ultrasound waves to thermally ablate a piece of tissue, destroying it with tremendous heat.

What Is High-Intensity Focused Ultrasound Used For?

Over the last decade, the development of novel sensor technology, the development and standardization of complex-valued frequency response calibration of hydrophones and deconvolution procedures, as well as the associated uncertainty determination, may have all contributed to more reliable and efficient high-intensity therapeutic ultrasound field characterization, thereby promoting the modality's clinical applicability.