Q Waves - A New Shift In ECG For Heart Problems 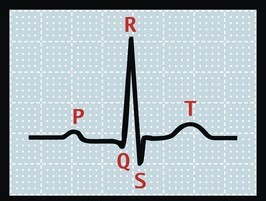 The Q waves indicate the interventricular septum's first depolarization and are defined as the first negative deflection after the P wave and occurring before the R wave.

A Q wave on an electrocardiogram (ECG) is an initially negative deflection of the QRS complex. A Q wave technically signifies that the net direction of early ventricular depolarization (QRS) electrical forces is pointing toward the negative pole of the lead axis.

Although strong Q waves are a hallmark of myocardial infarction, they may also be seen in various noninfarct conditions. Failure to recognize the different origins of Q waves might result in significant diagnostic mistakes.

A Q wave does not suggest any particular electrophysiological process. However, Q waves may be linked to one or more of the following factors:

What Is A Q Wave?

The QRS complex begins with the Q wave, the first downward deflection following the P wave.

There is no Q wave when the initial deflection of the QRS complex is vertical. In many, but not all, ECG leads, a typical person will have a modest Q wave. Q wave abnormalities are usually suggestive of myocardial infarction.

Pathologic Q waves are not an early indicator of myocardial infarction; they often develop over many hours to days. Once pathogenic Q waves have formed, they seldom disappear.

If the myocardial infarction is reperfused early (for example, percutaneous coronary intervention), shocked myocardial tissue may recover, and pathologic Q waves dissipate. In all other cases, they usually last eternally.

The exact definition of pathologic Q waves has been questioned. The most recent report, adopted by the ESC and ACC, is shown below.

A pathologic Q wave is defined as

Q waves are deemed pathological if the following conditions are met:

The initial forces that come from depolarization of the interventricular septum from left to right are responsible for the usual Q wave in lead I (a horizontal lead) and either an initial R or Q wave in the lead III (a lead with a dominantly vertical orientation at 120°).

It is generally known that Q waves are not always present in the lead III. The initial septal vector, oriented superiorly in such individuals, is the source of this Q wave. A Q wave in lead III is frequent in a normal heart when the electrical axis is horizontal.

Similarly, the existence of a Q3 and an inverted T3 may not indicate a myocardial infarction since a transverse posture might cause them.

Q waves represent the early phase of ventricular depolarization. If they are extremely broad (>0.2 seconds) or abnormally deep (>5 mm), they are pathogenic.

Pathologically deep but not broad Q waves are often indicative of ventricular hypertrophy. Myocardial infarction is indicated by Q waves that are both excessively deep and broad.

Anterolateral infarction with aberrant Q waves in leads I and aVL and precordial leads V4 to V6 is common in patients with an atypical origin of the left coronary artery from the pulmonary artery. 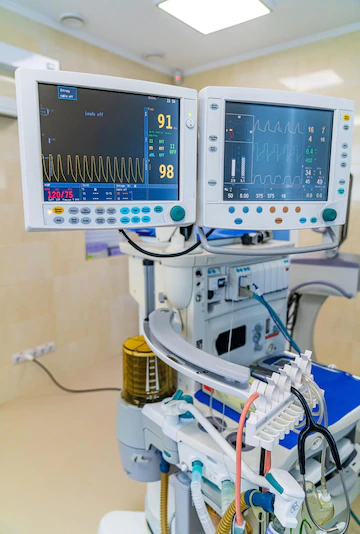 ECG machine and result display on the monitor screen

Normal conduction occurs when ventricular depolarization goes left to right through the septum and across both ventricles, with net forces directed towards the bigger left ventricle.

If the frontal QRS axis is between 60 and 90 degrees, a Q-wave may be expected in aVL. Myocardial infarctions were formerly classified as Q-wave or non-Q-wave, with the former having permanent transmural necrosis.

However, additional Q-waves may appear as soon as one hour following the onset of ischemic symptoms and are related to bigger infarcts, worse EF, and increased mortality.

As a result, despite putative transmural and permanent cardiac damage, individuals detected with STEMI within 12 hours of symptom onset usually have positive effects following reperfusion.

ECG machines and STEMI criteria cannot distinguish the two, but previous medical history, symptom duration, prior ECG, and other ECG criteria may.

Because published prevalences are based on the presence of pathogenic Q-waves in the electrocardiogram (ECG), they likely exclude a significant proportion of myocardial infarctions that do not (or just temporarily) present Q-waves in the ECG.

Some studies discover a comparable death rate, whereas others find prognoses for unreported or recognized myocardial infarctions. This disparity may be explained in part by huge disparities in baseline populations.

This might also explain disparities in long-term prognosis since some studies with stricter ECG criteria would include only bigger myocardial infarctions than those with laxer ECG criteria.

Furthermore, this information would be more attractive to the physician than the scholarly debate about whether a Q-wave reflects a previous myocardial infarction or not.

What Can Cause Q Waves?

What Does An Abnormal Q Wave On ECG Mean?

What Do Abnormal Q Waves Indicate?

Q waves represent the early phase of ventricular depolarization. If they are extremely broad (>0.2 seconds) or abnormally deep (>5 mm), they are pathogenic. Pathologically deep but not broad Q waves are often indicative of ventricular hypertrophy.

What Are Q Waves?

A Q wave is an electrocardiogram (ECG) deflection of the QRS complex that is initially negative. A Q wave technically signifies that the net direction of early ventricular depolarization (QRS) electrical forces is pointing toward the negative pole of the lead axis.

Q waves on an ECG are linked with an increased risk of heart disease and even death.

Any Q-wave may suggest the necessity for additional examination and the implementation of appropriate medical and perhaps invasive or surgical therapy.