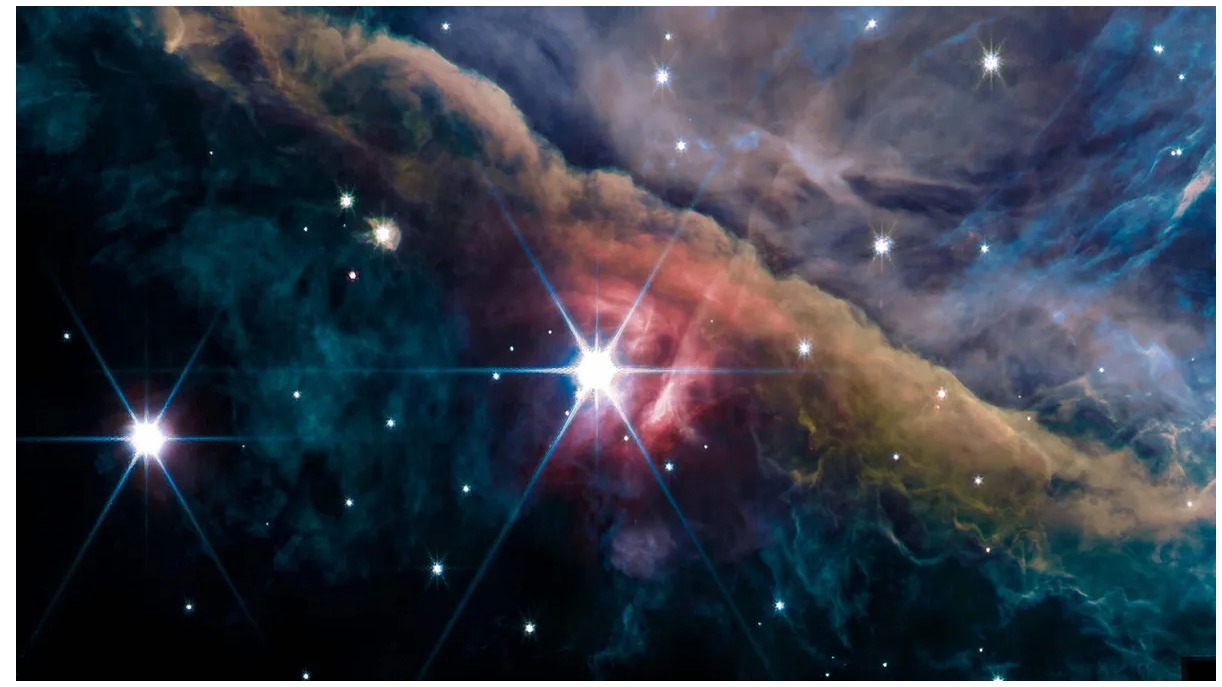 According to a press release, the photos were taken as part of the Early Release Science initiative and a PDRs4All partnership involving more than 100 scientists from 18 countries.

The team, which included the French National Center for Scientific Research (CNRS), Western University in Canada, and the University of Michigan, began the experiment in 2017 and waited five long years to get the results.

What Do New Images Reveal About Orion Nebula?

In this mash-up of filter data, you can see ionized gas, hydrocarbons, molecular gas, dust, and scattered sunlight. The bright star 2 Orionis A is located in the Orion Bar, which may also be considered a thick wall of gas and dust stretching from the upper left to the lower right of the image.

The Trapezium Cluster, a clump of young, massive stars, can be seen off to the upper right of the photograph, and its light shines brightly throughout the whole region. Strong UV light from the Trapezium cluster in the upper right corner also quickly erodes the Orion Bar, heats, and ionizes the atmosphere.

PDRs4All claims that the extended lifespans of molecules and dust are made possible by the dense atmosphere of the Bar. Despite this, Orion's burst of stellar activity results from the extraordinary variety of filaments, globules, young stars with discs, and voids in the area.

Recent photos indicate a wide range of remarkable structures on scales as small as 40 astronomical units or around the size of our solar system. The University of Michigan has said that these structures have a lot of dense matter filaments that could cause a whole new generation of stars to form.

To gather these photos, researchers from over a hundred universities in eighteen different countries collaborated under the PDRs4All umbrella as part of the Early Release Science initiative.

Alnitak, Saif, and Rigel are surrounded by a massive, opaque cloud of interstellar dust and gas. The Orion Nebula, a prominent part of the Milky Way, provides a haven for developing stars.

The Hubble Space Telescope of NASA/ESA captured the breathtaking region around the Herbig-Haro object HH 505 in the Orion Nebula.

NASA claims that the source of the outflows seen in HH 505 is the star IX Ori, which can be seen as a gracefully curved structure in the image. Since they are in direct touch with the massive outflow of gas and dust from the nebula's core, they have been distorted into swooping curves.

Located about 1,500 light-years away, the Orion Nebula is the nearest region to Earth where stars are being formed. Astronomers assembled this colorized picture from 520 Hubble images.

The nebula was completed with the help of ground-based imagery. The apparent angular size of the full moon is included in the ACS mosaic.

The Orion Nebula has attracted the attention of scientists as a possible window into the early history of our planet.

The Hubble Space Telescope took new images of the nebula. However, the equipment only works with visible light, blocked by the dense cloud of stardust at the nebula's center.

In contrast, James Webb Space Telescope can pick up the infrared light of the universe, allowing viewers to see beyond clouds of dust and into the heart of the cosmos.

In this image, we are looking at this cycle where the first generation of stars is essentially irradiating the material for the next generation. The incredible structures we observe will detail how the feedback cycle of stellar birth occurs in our galaxy and beyond.

The scientific community is keen to discover more about what happened during the first million years of our planet's development.

The images are precise enough to depict the interior characteristics of the nebula at sizes equivalent to the size of our solar system.