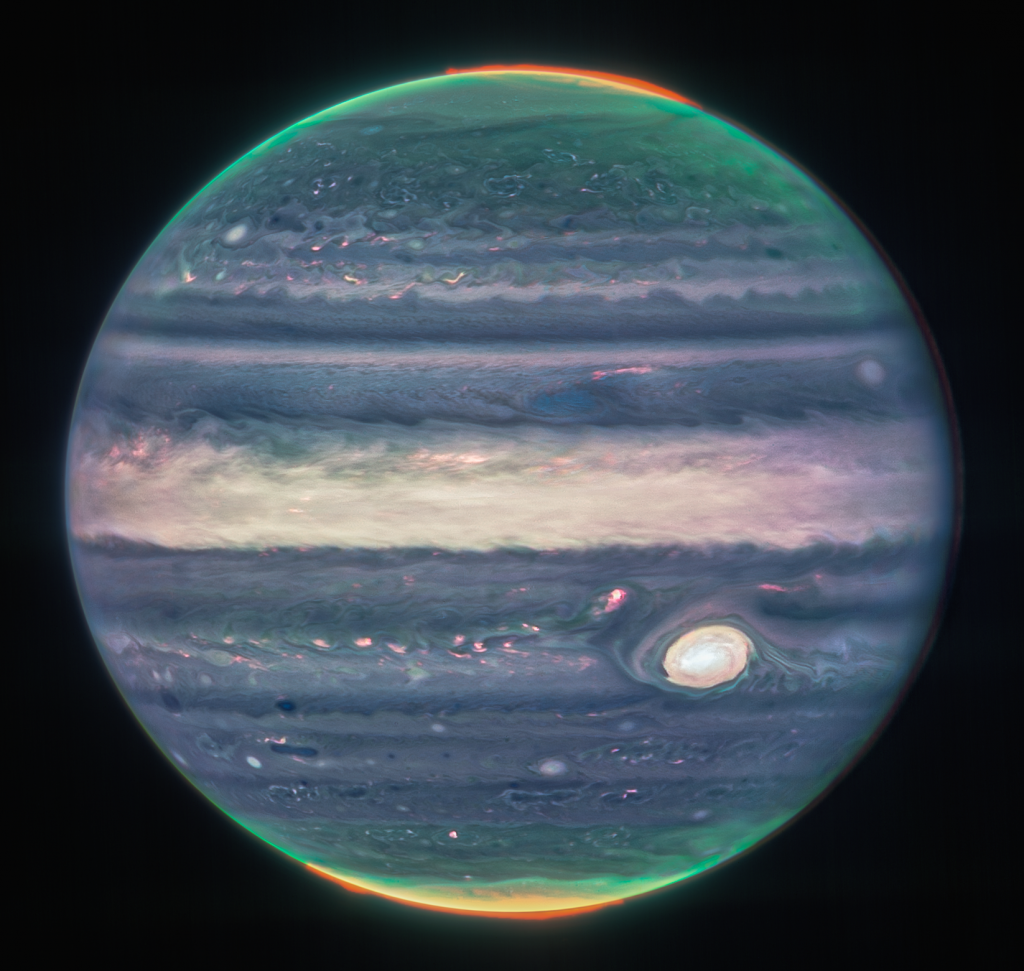 Jupiter's auroras have never previously been seen, thanks to the world's newest and largest space telescope.

On Monday, scientists unveiled these images of the largest planet in our solar system.

Jupiter's northern and southern lights, as well as its polar haze, were photographed for the first time by the James Webb satellite telescope in July.

The $10 billion James Webb Space Telescope, developed jointly by NASA and the European Space Agency, was launched at the end of 2017 and had been conducting infrared astronomical observations of the universe ever since.

The development of the world's finest space observatory started in 2004, and after years of delays, the telescope and its giant gold mirror ultimately launched on December 25, 2021.

Webb will allow scientists to see back 13.7 billion years to the time when the first stars and galaxies were formed and maybe witness the universe's birth.

The distance between the observatory and Earth is 1.6 million kilometers (1 million miles).

One spectacular wide-angle shot reveals two small moons and a weak ring system around the planet, all set against a brilliant backdrop of galaxies.

What Are NASA's James Webb Space Telescope Observations Of Jupiter?

In the latest pictures of Jupiter from NASA's James Webb Space Telescope, you can see rainbow auroras, massive storms, and faraway galaxies.

The Webb telescope, a multinational effort by NASA, the European Space Agency, and the Canadian Space Agency, was used to conduct observations of our solar system's biggest planet under the direction of De Pater and Thierry Fouchet, a professor at the Paris Observatory.

Painting a picture that swings from orange and yellow near Jupiter's poles to blues and purples toward the center, many photos from the telescope came together to make an overall composite and offer Earth a peek at the gas giant.

According to NASA, you may also observe faint rings and distant galaxies "photobombing" in the background.

Also, the Great Red Spot, a storm on Jupiter large enough to envelop Earth, seems white in these pictures.

Heidi Hammel, a scientist at Webb who studies the solar system and is vice president for science at the Association of Universities for Research in Astronomy, said,

It's likely that the multiple bright white "spots" and "streaks" are the cloud tops of concentrated convective storms at very high altitudes.

The telescope's composite photographs, which provide a clearer view into Jupiter's life, were created via a collaboration between scientists and citizen scientist Judy Schmidt, NASA said.

Schmidt, who lives near Modesto, California, said that the fast rotation of Jupiter makes it hard to take a picture of the planet.

This one picture encapsulates the science of our Jupiter system program, which investigates the dynamics and chemistry of Jupiter itself, its rings, and its satellite system,

The space telescope uses infrared light to reveal parts of the universe that could not be seen before.

The telescope is also used to detect and study exoplanetary systems, which consist of a planet orbiting a star other than the Sun.

Looking into the atmospheres of exoplanets with the possibility of supporting life might provide essential leads in the quest for extraterrestrial intelligence.

Webb will allow scientists to see back 13.7 billion years to the time when the first stars and galaxies were formed and maybe witness the birth of the universe.

The telescope will examine the whole span of cosmic history, from the moments immediately after the big bang that formed our universe to the present day, when it is populated with galaxies, stars, and planets.