Metastatic Brain Tumours – The Molecular Genomics To Better Understand It 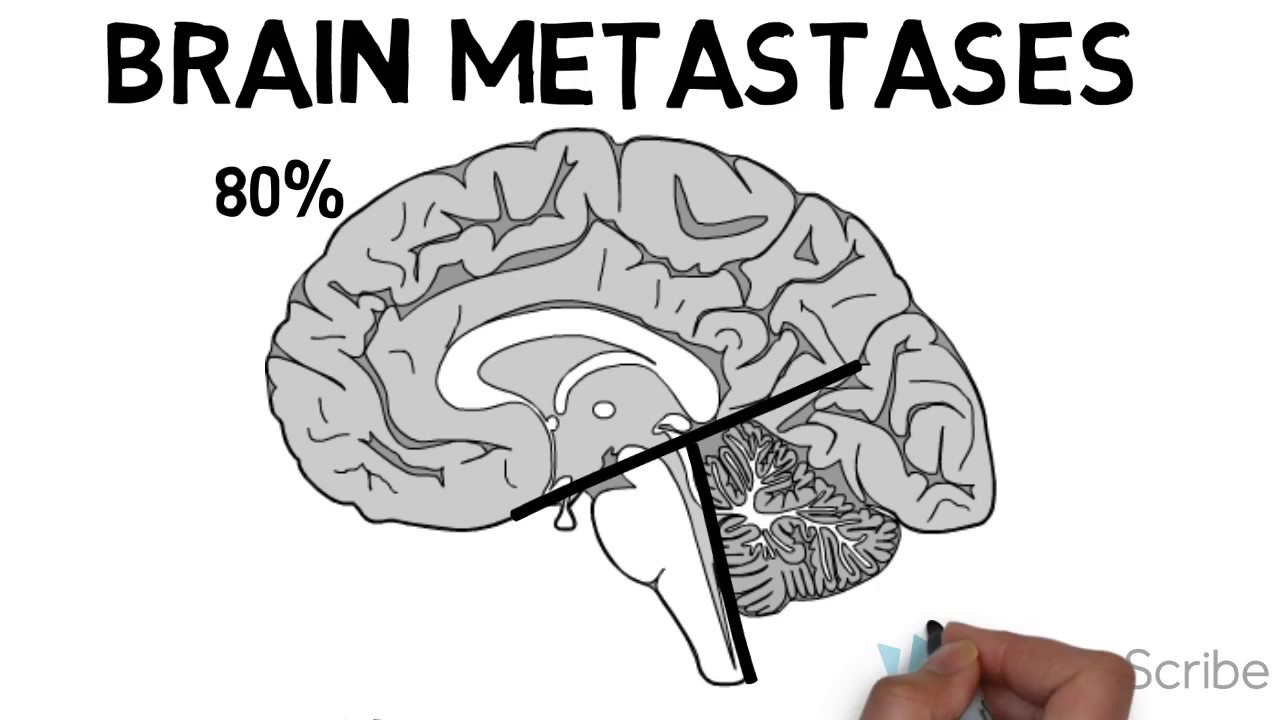 It is expected that 30–40% of individuals with breast and lung cancer may develop brain metastases. Because there are presently no diagnostics that can predict which individuals will be affected, brain lesions are often not detected until patients display neurological symptoms.

Current chemotherapies are ineffective against brain metastases, and despite surgical resection and radiation, the prognosis for these patients remains bleak, with an average life of just 6–9 months.

Because cancer is essentially a genetic illness involving both patient genetics and aberrant tumor genomes, determining why or how brain metastases develop necessitates an examination of the accompanying somatic mutations.

Metastatic biological mechanisms, including the involvement of the microenvironment and cancer cells' capacity to cross the blood-brain barrier (BBB), have been thoroughly addressed elsewhere.

Local invasion, survival in the circulation, intravasation, extravasation, micrometastasis development, and metastatic colonization are the phases of metastasis in chronological sequence of occurrence.

Invasion is dependent on an epithelial to mesenchymal transition (EMT), in which epithelial cell qualities are inhibited, and mesenchymal cell traits are activated, resulting in the loss of cell polarity and cell-cell adhesion.

Underlying EMT is a gene expression pattern governed by epigenetic alterations across the genome and abnormal expression of critical transcription factors and microRNAs. New data suggests reversing the EMT pathway is essential for colonized metastatic cells to proliferate.

Additional research suggests that cancer cells acquire stem cell-like characteristics throughout the EMT process. The cancer stem cells are a small group of cells inside a tumor. They can self-renew indefinitely, may seed new tumors, and are a possible cell type from the initial tumor that develops a metastatic lesion.

Decades of studies have discovered that carcinogenesis is regulated by oncogene activation and tumor suppressor gene inactivation.

Thus, the reasons for illness onset and progression may be located within the tumor genome. Significant clinical advancements in primary cancer therapy may be credited to molecularly focused medications that target active oncogenes such as HER2, EGFR, MET, and BRAF.

Their abnormal presence in the original tumor genome serves as a biomarker for the success of the targeted therapy.

Furthermore, oncogenic factors often have kinase or ligand-binding functions and 'druggable' protein motifs. The advantages of targeted therapies over standard chemotherapy are apparent, with improved effectiveness and less devastating side effects.

The Pattern Of Genomic Mutations In Metastatic Brain Tumours

The inefficiency of targeted medication transfer over the BBB, on the other hand, has been linked to an increased incidence of metastatic brain tumours in patients with managed primary malignancy and peripheral metastasis.

Although further research is needed, each of these findings suggests that an oncogene mechanistically connected to the underlying malignancy is also involved in increasing the occurrence of metastatic brain tumours. This situation might apply to altered BRAF oncogene expression in melanoma metastases, abnormal levels of HER2 oncogene in breast cancer brain metastases, and mutated EGFR oncogene in lung cancer brain metastases.

Based on information on their driver oncogene status and frequency of mutation in the linked original tumor, the potential relevance of BRAF, HER2, and EGFR for brain metastasis was discovered.

Their precise oncogenic function and mutation frequency in metastatic brain tumours are unknown.

Furthermore, it is uncertain if, for a particular oncogene, certain kinds of activating mutations are more often found in brain metastases, as preliminary data suggests. Investigating these unknowns will help to understand why brain metastases emerge when systemic illness is treated with targeted medicines and why treating metastatic brain tumours has had minor impacts with no influence on therapeutic choices.

Despite the vast number of individuals affected, research on significant cancer-linked genomic copy number aberrations, rearrangements, and sequence changes in metastatic brain tumours is still in its early stages.

Most research on somatic DNA coding mutations in metastatic brain tumours has been oriented toward activating mutations in oncogenes or tumor suppressors previously linked to the underlying malignancy.

A small study that included DNA from ten melanoma metastases measured a panel of BRAF, NRAS, AKT, PIK3CA, and KIT activating mutations using a highly sensitive primer extension and mass spectrometry BRAF activating mutations were the most common, followed by NRAS, as in primary melanoma.

The investigation confirmed that KRAS mutations were more prevalent in colorectal cancer and that 9 of 10 matched brain metastases were 100% concordant with mutations found in the source tumor.

NRAS and PIK3CA mutations were found independently in samples from two individuals, both primary and metastatic. An EGFR mutation was found in a single patient's breast carcinoma but not in the matching metastasis.

Whether a driver is involved in discovering an oncogene in both primary and metastatic cancer or just in brain metastases is a significant difference that justifies altering targeted therapies or generating predictive biomarkers for metastatic brain tumors.

They directly investigated whether processes leading to macrometastases are driven by mutations that pre-exist in primary tumor cells or arise at a distant site.

Regarding coding mutations, 48 of 50 verified somatic gene mutations were found in DNA isolated from all three tumor samples, indicating that coding mutations are consistent in primary and metastatic cancer.

The allelic frequency of 26 of these variants was considerably raised in metastases or xenograft specimens, whereas the allelic frequency of two mutations was reduced. The observed degrees of enrichment and decrease of enrichment (but still detectable) for particular coding mutations in metastasis and xenograft specimens might imply that a fraction of primary tumor cells bearing the array of mutations in the primary, rather than a single clone, was contributing.

Unlike coding mutations, copy number aberrations were seen in metastatic and xenograft specimens, with 19% and 39% distinct from the source malignancy, respectively. A similar study that used massively parallel sequencing to explore an estrogen receptor alpha-positive breast tumor yielded a different result. In this case, the metastasis was discovered nine years after the original diagnosis[88].

Ding et al. discover that the incidence of copy number changes is higher in metastatic and xenograft specimens lend itself to the re-interpretation of previous investigations.

More research is needed to determine if the broad areas include actual driving lesions or whether they indicate more genomic instability underlying other structural abnormalities that have a role in metastasis.

Nonetheless, studies demonstrate a high frequency of copy number variations in recognized cancer genes in brain metastases. Two investigations of breast cancer brain metastasis, one utilizing aCGH techniques and the other fluorescence in situ hybridization (FISH), reveal that increases in the EGFR oncogene and loss of the PTEN tumor suppressor are more common in metastases.

A range of structural and coding defects and epigenetic dysregulation provide the groundwork for aberrant gene expression, which serves as the biomolecular connection between the aberrant genome and changed cancer cell function.

Whole-genome and transcriptome analyses of primary tumours are used to discover genes or transcripts with considerable cancer-specific expression.

Twenty-seven genes changed considerably, including HIF1A and HER3, both highly upregulated. This shows that the epidermal growth factor receptor family may have a role in even the triple-negative triple breast cancer subtype.

An essential part of HIF1A is supported by independent research showing more frequent overexpression in inpatient brain metastases compared to primary breast cancer tissues and enhanced aerobic glycolysis in cells migrating to or implanted in the brain versus parent cells in mouse models of human cancer cell line xenografts.

Bos et al. identified upregulated expression of an EGFR ligand HBEGF and cyclooxygenase PTGS2 and ectopic expression of the brain-specific gene 2,6-sialyltransferase ST6GALNAC5 in breast cancer cells as factors contributing to their ability to cross the BBB in multiple lines of whole-genome investigation in cell lines and patient specimens.

Is Metastatic Brain Cancer A Terminal?

Metastatic brain cancer is often fatal. While some individuals live longer than others, and a few live considerably longer than average, most people have months to live when diagnosed.

What Is The Average Survival For Patients With Brain Metastasis?

Brain metastases are associated with considerable morbidity, death, and a poor prognosis. The median survival duration ranges from 4 to 16 months, depending on the initial cancer location.

How Long Can You Live With Metastasized Brain Cancer?

People diagnosed with brain metastasis lived on average for fewer than six months a decade and a half ago. Treatments have improved throughout the years, and patients with brain metastases now enjoy longer lives than ever before.

Many concerns remain unanswered due to the present lack of understanding of brain metastases, including whether or not the initial cancer drivers are also the drivers of associated metastatic brain tumors. Early evidence shows that distinct factors may be responsible for developing metastatic brain cancers, generating new challenges. Does the accumulation of mutations at the metastatic location result in the emergence of a novel driver? Do cells produced from a small subclone in the initial tumor harbor lesions capable of evading primary adjuvant treatment and seeding the metastatic occurrence? More study is required to bridge the gap and address these essential concerns.