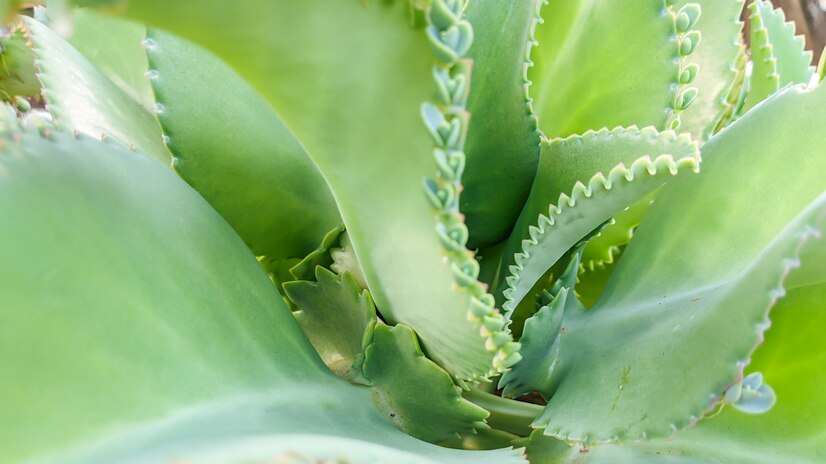 Mother of Thousands benefits cancer by producing special chemicals that are beneficial against the dreadful disease of cancer. The most notable of Mother of Thousands' numerous advantages is its ability to fight cancer.

Different glycosides, steroids, flavonoids, and organic acids with preventative anti-cancer and anti-tumor effects may be found in Mother of Thousands. The Mother of Thousands will be essential in the fight against cancer, even if it cannot yet be used to treat the disease directly.

What Is Mother Of Thousands?

Mother of Thousands (Kalanchoe daigremontiana) has several other names, including Mexican Hat Plant, Alligator Plant, and Devil's Backbone. The plant is a succulent with a single stem, which originates in Madagascar.

The huge, pointed, thin leaves are vibrant blue-green and may reach a length of 6 inches and a width of 3 inches. If allowed to flourish, the plant may reach a height of 18-35 inches.

The small plants that sprout up along the leaf margins are unique to this plant. As they fall from the mother plant, these seedlings will seek out fertile soil and attempt to establish a new plant there.

With its tiny plantlets trying their best to thrive and reproduce in all kinds of soil alongside other plants, the Mother of Thousands is sometimes seen by gardeners as a bit of a problem.

It's easy to understand why this plant is called "the mother of a thousand plants" since this is what it is. You won't have to worry too much about propagation while planting Mother of Thousands inside; however, you may discover that the small plantlets drop into any plant pots nearby.

Botanical Features Of Mother Of Thousands

It is not rare for Kalanchoe daigremontiana to produce intermittent flowers in regions with favorable wet seasons. A tall stalk emerges from the plant's middle and unfolds like an umbrella to reveal innumerable pink or red bell-shaped blooms with downward-pointing petals.

If the blossom is pollinated, it will yield four little fruits. The tiny seeds within these fruits are dispersed when they fall to the ground. After the fruit rots and the seeds are washed away by the rain, new plants will grow wherever the sand happens to be.

Mother of Thousands has developed a method for continuing photosynthesis in adverse weather conditions. In contrast to other plants, which use photosynthesis to take in and fix carbon dioxide during the day, the Kalanchoe plant uses a process called CAM (Crassulacean acid metabolism) at night.

This means it takes in carbon dioxide from the air at night and stores it until the next day when it breaks down into oxygen and carbon dioxide. Due to this intermediate storage, the pH of the plant's leaves drops into the acidic range at night and only rises again during the day.

The main benefit of this CAM system is that plants can keep their stomata closed during the hottest part of the day, which cuts down on the amount of water they lose through transpiration.

6 Amazing facts about Kalanchoe - Mother of Thousands, You may not Know.

One of the chemical substances found in this plant has piqued the curiosity of scientists: bufadienolide, named after the toad species Bufo, where it was discovered.

Some bufadienolides have exhibited anti-tumor activity in both in-vitro and in-vivo studies under particular conditions. But it's important to note that in-vivo tests have only been done on mice, and the results have been very promising.

Nonetheless, these medicinal characteristics are a double-edged sword since the steroid daigremontanide exposes them to potential hazards.

This is just one of five known bufadienolides found in Kalanchoe daigremontiana, and the amount found in the plant's leaves varies from plant to plant. This "poison" occurs in varying degrees based on the plant's location, accessible water, the season of the year, and individual plant composition.

If the concentration of daigremontianin is too high, it might induce heart and renal failure. Furthermore, long-term usage may result in chronic intoxication even at tiny dosages.

A Mother of Thousands plant is a wonderful addition to any home. Most people's attention is drawn to its fascinating foliage. There are several upsides to this:

As its name implies, Mother of Thousands is a wonderful supplement for expecting mothers. Pregnant women may avoid premature births with this herb in particular regions of Madagascar, where the plant is native.

Some Malagasy communities still use this treatment to stop babies from being born too soon since they don't know much about modern medicine. They also say that this herb can treat infertility and other health problems, which they discuss at length when discussing its benefits.

However, due to the plant's questionable safety, we must exercise caution while consuming it. The risks involved will be discussed in more depth later on.

Certain chemicals found in many plants can help prevent the terrible disease cancer. This "Mother of Thousands" plant is one of them. The Mother of Thousands can be used for many things, but its ability to fight cancer stands out.

Having anti-tumor characteristics, Mother of Thousands is used in the preparation of cancer therapy, according to an article by BioInterfare Research. They claim that the bufadienolide in Mother of Thousands causes oxidative stress, which kills cancer cells.

The organic acids, steroids, flavonoids, and glycosides found in Mother of Thousands have been shown to inhibit the growth of cancerous cells in the body.

So, the Mother of Dragons might not be able to cure cancer on its own, but it will be a very important part of the process of finding a cure.

Most diseases may be traced back to chronic inflammation. Most over-the-counter pain relievers include plant-based anti-inflammatory extracts.

Inflammation may be reduced by using cosmetics or other items containing minerals worth thousands. Anti-inflammatory medicine is made from the mother of thousands.

Its antibacterial properties help reduce acne, and its astringent properties pull oil and dirt out of the skin. Its exceptional ability to hold moisture may help keep skin supple and healthy.

The mother of thousands is bad for your heart, so you shouldn't eat it. However, it can treat skin problems in medicine and beauty.

To eliminate potentially dangerous free radicals, antioxidants play a crucial role in the human body. Microbes, meanwhile, are the disease-causing microorganisms found within humans. There are a variety of uses for the chemical bufadienolides.

The massive leaves of a mother of a thousand trees may collect carbon dioxide at night, store it, and release more oxygen the next day.

While you're sound asleep, these plants are busy cleaning the air and reusing carbon dioxide. When you wake up, the plant will produce new oxygen for breathing.

Is The Mother Of Thousands Plant Medicinal?

Mother of Thousands is a traditional cure for preterm labor and is used in infertility situations.

Is The Mother Of Thousands Toxic?

This plant is toxic to dogs, cats, and humans. As a result, this succulent plant is better suited to families without dogs or small children.

What Is The Mother Of Thousands Plant Used For?

The Mother of Thousands is a medicinal plant used to treat infertility and early labor in pregnant women. Its usage is not without risk since the amount of the deadly steroid Daigremontianin found in the plant's utilized leaves varies from plant to plant.

Is The Kalanchoe Plant Good For Cancer?

Mother of Thousands may be seen as a hopeful path for scientific and pharmaceutical research that might lead to novel therapies for illnesses such as cancer in the future. Yet, its usage is not encouraged now due to its toxicity levels.