Papillary Muscle – Overview Of Its Anatomy And Functions 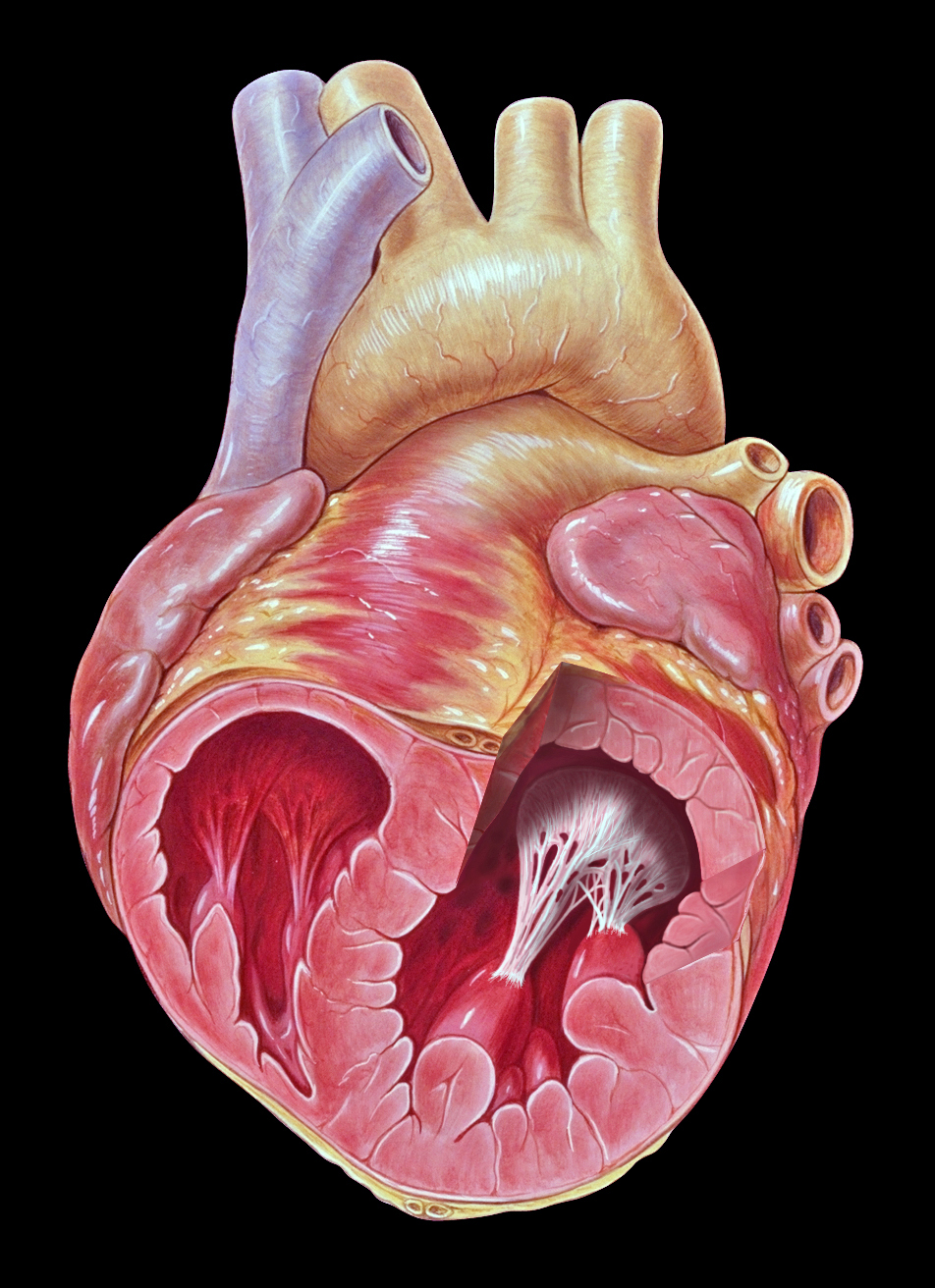 Papillary muscle is found in the ventricles of the heart. They adhere through the chordae tendineae to the cusps of the atrioventricular valves (also known as the mitral and tricuspid valves) and contract to prevent inversion or prolapse valves during systole (or ventricular contraction). Papillary muscles account for around 10% of the total cardiac mass.

The septal papillary muscle is generally the least visible and may sometimes be confused with the ventricular wall. It prevents tricuspid valve leaflet prolapse during ventricular systole. Papillary dysfunction or chordate rupture may cause tricuspid regurgitation. Pacing lead insertion into the right ventricular apex may be complicated by the tricuspid's papillary muscles and sub-valvular apparatus.

The papillary muscles protrude into the ventricle chambers like nipples. They are linked to the valves between the atria and ventricles by thin strands of tendon and prevent the valves from opening when the ventricles contract.

The right and left ventricle's papillary muscles contract immediately before ventricular systole and remain tense throughout. Bracing the atrioventricular valves against prolapse (driven back into the atria by the high pressure in the ventricles) avoids regurgitation (backward flow of ventricular blood into the atrial cavities).

Papillary muscle rupture is an uncommon and possibly catastrophic condition that often occurs after myocardial infarction or due to infective endocarditis. These muscles link to the tricuspid and mitral valve leaflets through the chordae tendineae and inhibit ventricular blood regurgitation by tensile strength. Rupture may cause pulmonary edema, cardiogenic shock, and pulmonary edema. Without surgical intervention, death is relatively high. Papillary muscle rupture is believed to occur in 1% to 5% of people suffering from an acute myocardial infarction.

Without surgical intervention, death is significant, estimated to be as high as 50% within 24 hours after total rupture. Partial rupture (at one of the muscle heads) causes fewer flailing leaflets and less valvular regurgitation. Patients with abrupt acute heart failure symptoms should be evaluated for the possibility of papillary muscle rupture. A high degree of suspicion should be considered in patients experiencing their first myocardial infarction involving the inferior wall. The damaged valve determines symptoms and physical findings.

Early detection is critical because of the rapid development of cardiogenic shock and its devastating implications. Emergency surgical therapy is the cornerstone of papillary muscle rupture treatment. Diuretics, afterload reduction, and oxygen treatment may be the first medical therapy. For extremely unstable individuals, intra-aortic balloon counter-pulsation may be required. Cardiogenic shock owing to severe left and right ventricular dysfunction, ventricular septal rupture, and free-wall myocardial rupture are other problems that may present with similar symptoms.

Left ventricular dysfunction is characterized by pulmonary edema and reduced cardiac output, which results in organ hypoperfusion. Right ventricular failure may also cause the left heart chambers to be underfilled, resulting in low cardiac output. Septal rupture occurs when necrotic tissue is present, resulting in a left-to-right shunt and a new pansystolic murmur. Small infarctions and single-vessel disease are often the etiologies of free-wall myocardial rupture, which is analogous to septal and papillary muscle rupture. The most frequent location is left ventricular wall rupture, which occurs in 50% of patients within five days.

Echocardiography is the first-line imaging technique for diagnosing cardiac problems, particularly papillary muscles. Papillary muscles are highly visible on transthoracic echocardiograms in the short-axis view 1-3 cm apical to the mitral valve level laterally. Real-time cine representation of papillary muscle structure and function is possible using echocardiography. This is accomplished by combining 2D and 3D grey scale imagery for morphologic depiction, with Doppler imaging giving additional hemodynamic information. Operator reliance, restricted soft tissue contrast, and a limited field-of-view are all limitations of echocardiograms in various circumstances dependent on patient anatomy, movement, and post-operative condition with covering hardware and dressings. CT scans may be used to evaluate papillary muscle and other components of the mitral valve system. CT's high isotropic spatial resolution enables precise morphological delineation and measurement, which is critical for surgical and interventional procedures. Dynamic examination of the papillary muscles and size of ventricular function are possible using retrospective ECG-gating, although assessment of flow dynamics is restricted. While CT imaging is linked with ionizing radiation, dose reduction measures such as tube current modulation and lower tube voltage and current settings may help reduce this.

Because of its high spatial and temporal resolution, broad field-of-view, and multi-planar imaging capabilities, cardiovascular magnetic resonance (CMR) is ideally suited to examining papillary muscles. CMR has strong inherent soft-tissue contrast, which may be enhanced with gadolinium-based contrast agents, potentially leading to better tissue characterization. A balanced steady-state free precession sequence is performed to assess the structure and function of papillary muscles, ventricles, and valves. It is possible to undertake dynamic evaluations of papillary muscle contraction and measurements of muscle thickness and mass. New 3D-cine-steady-state free precession sequences allow for 4D reconstruction and dynamic measurement of papillary muscle action in any plane. Myocardial tagging methods may objectively quantify papillary muscle contraction and dynamic motion; the tag lines' deformation (or "strain") can be quantified as a percentage, indicating the amount of contraction that occurs in systole.

The morphology of the papillary muscles varies greatly. Papillary muscles are classified based on the number of muscle heads and then further classified based on whether the heads share a common basal segment or have distinct basal parts. The anterolateral muscle typically has one main muscle group, while the papillary muscle has two or three major muscle groups. When there are several muscle groups, they may have a shared origin or independent origins. Although many of these variations are benign and accidental, specific papillary muscle polymorphisms cause functional impairments that contribute to problems such as left ventricular outflow blockage. The abnormalities are anomaly insertion, auxiliary muscles, antero-apical displacement, double bifid morphology, and hypermobile muscles.

What Are The Names Of The Papillary Muscles?

What Are The Two Papillary Muscles?

What Is The Function Of Papillary Muscles In Heart?

When the heart is working normally, the papillary muscles provide a crucial job by helping to stop blood from leaking out of the AV valves during the systole phase of the beat. How they are attached to the heart wall may impact how their function is conceptualized.

What Is The Papillary Muscle And What Does It Do?

The papillary muscles have projections that look like nipples and are located inside the chambers of the ventricles. They are prevented from opening when the ventricles contract because they are linked to the valves between the atria and ventricles by thin tendon strands and are held in place by the atria.

The papillary muscles aid in good heart function by preventing leakage through the AV valves during systole. Their connection to the heart wall may impact how we perceive their function. This attachment is often shown as a direct link between their bases and the solid section of the heart wall.

Papillary muscle dysfunction causes backflow of blood through the valves, which may lead to the left or right-sided heart failure. The papillary muscle may rupture in both partial and total fashion. Papillary muscle rupture is uncommon, occurring in just 1% to 5% of individuals with acute myocardial infarction. This is likely related to advancements in early detection and revascularization approaches for limiting ischemia through percutaneous coronary interventions.