The Fetus - The Effects Of Ultrasound And MRI

Ultrasound and magnetic resonance imaging (MRI) are both considered to be relatively safe imaging modalities for pregnant women and their fetuses, and thus are appropriate for use in their diagnostics. Both techniques, however, may pose some risks when used during pregnancy to some extent. Knowledge of potential bioeffects, as well as the background and influence of specific factors on safety, are essential for keeping the fetus safe.

What Is A Fetal Ultrasound?

"Diagnostic ultrasound studies of the fetus are generally considered safe during pregnancy," according to the American Institute of Ultrasound in Medicine's Practice Guideline for the Performance of Obstetric Ultrasound Examinations, published in 2007. However, despite diagnostic ultrasound's excellent safety record, laboratory studies in animals have shown that if the intensity is high enough, it can cause serious harm.

There were no effects on childhood cancer, dyslexia, speech development, or congenital anomalies found in a review of epidemiologic studies of human exposure to ultrasound. There is, however, very little evidence that frequent ultrasound exposure of the human fetus is linked to a non-significant decrease in newborn body weight, a decrease in the frequency of right-handedness, and delayed speech.

A female doctor holding the tip of an ultrasound machine

Many animal studies, as well as a few well-controlled human studies, have shown thermally induced teratogenesis. Ultrasound raises the temperature in the beam's focal area, which has the potential to cause thermal changes in tissue. Hyperthermia is a known teratogen in mammalian laboratory animals and a suspected teratogen in humans, and it can result in a wide range of structural and functional defects. Elevated temperatures may be particularly harmful to the human embryo and fetus.

In general, maternal core body temperature rises 2°C above normal for long periods of time, 2–2.5°C for 0.5–1 h, and 4°C for 15 minutes. Developmental abnormalities in animal models have resulted as a result of this. The above temperatures may or may not be reasonable threshold predictions for adverse developmental effects in humans due to significant differences in thermoregulation and thermoneutral ambient temperatures.

Acoustic cavitation, radiation force, and acoustic streaming are non-thermal ultrasound side effects that may be more noticeable early in pregnancy when the embryonic tissues are loosely tethered and exposed to an ultrasound beam traveling through a liquid path. The presence of gas-encapsulated echo-contrast media in the sound field increases the likelihood of producing nonthermal effects similar to cavitation. Ultrasound contrast agents are therefore not approved for use during pregnancy. In mammalian tissues that contain gas, non-thermal damage has been observed.

According to the AIUM 1993's 1992 Statement on Non-human Mammalian in vivo Biological Effects, an MI value of 0.3 represents the threshold for the possibility of capillary bleeding in gas-containing organs like the lungs and intestines. Following the theoretical study by Apfel and Holland in 1991, which yielded the MI formula, an MI value of 0.7 was chosen as the threshold for cavitation.

A female doctor performing an ultrasound on a pregnant woman

How To Keep Fetal Ultrasound Safe?

In order to keep the fetal ultrasound safe, there are a few major rules that must be followed. First and foremost, the TI must be less than one. If the TI is between 0.7 and 1, the recommended maximum scanning time for obstetrical scanning can be up to 60 minutes, which is usually enough time to obtain relevant clinical information, even in complicated fetal anomalies. Increasing TI to 2–2.5, on the other hand, reduces the maximum scanning time to under 4 minutes. Second, the lowest possible output for the shortest time possible must be used in order to obtain diagnostic information. Finally, according to the As Low As Reasonably Achievable (ALARA) principle, the exposure time must be kept as short as possible.

When exposing an 8-week-old embryo or the head, brain, or spine of any fetus to diagnostic ultrasound, extra caution should be taken to reduce the risk of thermal hazard. However, it appears that the most important rule is that doctors and sonographers be aware of how to translate technical aspects of ultrasound into potential bioeffects.

Non-Medical Use Of Ultrasound

The use of fetal ultrasound for non-medical purposes is also worth mentioning, as it is gaining popularity around the world. The International Society of Ultrasound in Obstetrics and Gynecology opposes the use of ultrasound to provide fetus souvenir images.

Furthermore, AIUM strongly opposes the use of ultrasound for non-medical purposes such as psychosocial or recreational purposes, and emphasizes that using 2D/3D/4D ultrasound to only view the fetus, obtain a picture of the fetus, or determine the fetal gender without a medical indication is inappropriate and contrary to responsible medical practice. The 'business' of nonmedical fetal ultrasound, on the other hand, appears to be expanding, as well as gaining wider acceptance among general and even medical societies.

There is no scientific evidence in humans that suggests a routine MRI examination during pregnancy poses a significant risk to the fetus.

Furthermore, for more than 25 years, MRI has been used to evaluate obstetrical, placental, and fetal abnormalities in pregnant patients, and it is a proven, established imaging modality for evaluating fetal anomalies that are not well assessed by sonography.

The use of MRI not only helps with diagnosis, but it also helps with treatment and delivery planning and counseling. Fetal MRI, on the other hand, should only be done for a good reason, and only after careful consideration of sonographic findings and family history. 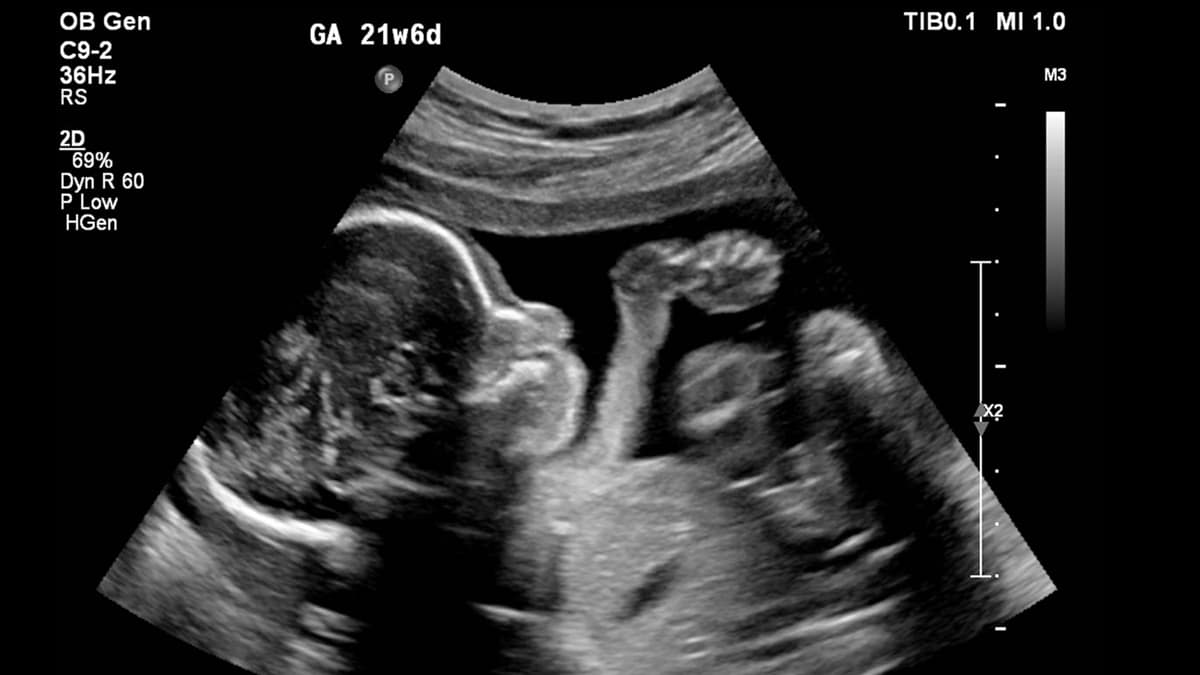 An ultrasound x-ray showing the baby in the fetus

Although there is no evidence that using clinical MRI during pregnancy causes harm, positive proof of safety is difficult to obtain, and there is currently uncertainty about the risk associated with MRI examinations of pregnant patients, according to the International Commission on Non-Ionizing Radiation Protection 2004, 2009b, the Medicines and Healthcare Products Regulatory Agency 2007, and the International Electrotechnical Commission 2008. There have also been reports that MRI may make the fetus more susceptible to temperature changes.

The following are some of the potential MRI side effects to be aware of:

How To Keep Fetal MRI Safe?

To ensure the safety of fetal MRI, the ALARA principle dictates that a few key guidelines be followed. First, keep SAR below 2W/kg whole body average, second, limit examination time to avoid maternal heat stress, and third, monitor fetal temperature to keep it below 38°C and not rise by more than 0.5°C. Again, the most important factor appears to be doctors' and sonographers' awareness of these critical safety factors.

What Is The Effect Of MRI To Fetuses?

There are no proven risks to pregnant women or unborn babies from MRI exams. Over the last 30 years, thousands of pregnant women have had MRI exams, and no known harmful effects to the baby have been found.

Can Ultrasound Cause Damage To Fetus?

Ultrasounds have been used to monitor pregnancy for decades, and there's no meaningful evidence that they can cause harm to a developing fetus.

Can MRI Contrast Hurt A Fetus?

(Reuters Health) - In the critical first trimester of pregnancy, undergoing magnetic resonance imaging (MRI) without a contrast agent is not associated with any negative outcomes for the baby, according to a new study.

Can Too Many Ultrasounds Hurt The Baby?

Having multiple ultrasound examinations during pregnancy is unlikely to cause any lasting harm to the developing fetus, according to a new study that confirms the long-term safety of the commonly used procedure.

Despite the fact that both fetal ultrasound and magnetic resonance imaging (MRI) are widely regarded as completely safe imaging modalities for the developing fetus, numerous reports have been published warning about the potential for both modalities to cause harm. Ultrasound and magnetic resonance imaging (MRI) are, on the other hand, well-known diagnostic tools in prenatal and perinatal medicine. When ultrasound and MRI are used during pregnancy, the risk–benefit ratio must always be taken into consideration.