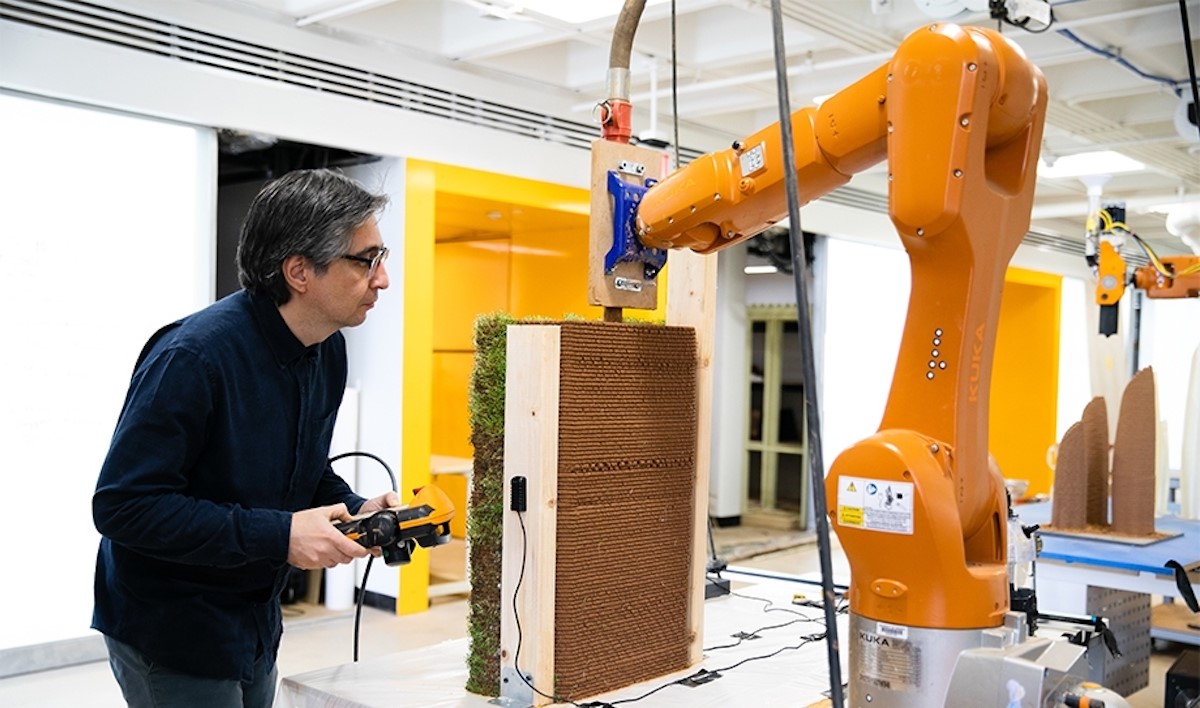 Researchers invent 3d-printed walls that can grow plants by coming up with a way to 3D print with seed-impregnated soil. This could be used to build walls and roofs where plants can grow

Scientists at the University of Virginia think that by making "soil inks" out of soil and seeds that can be printed with a 3D printer, greenery could be built into buildings instead of just being put on top.

The UVA research team is using locally sourced bio-based materials and the speed, low cost, and low energy needs of additive manufacturing to make these green walls. The team has already been successful at growing plants on these materials, which led them to call the prototypes "oversized Chia Pets."

We are working with local soils and plants mixed with water. The only electricity we need is to move the material and run a pump during printing. If we don’t need a printed piece or if it isn’t the right quality, we can recycle and reuse the material in the next batch of inks.

This solution could pave the way for buildings that don't put any carbon dioxide into the air because the plants covering them would pull carbon dioxide out of the air.

UVA says that this method could also be used to build green walls and roofs, which would have benefits like natural insulation, protection from flooding, and green spaces for people, pollinators, and other animals.

Ji Ma, an assistant professor of materials science and engineering at UVA's School of Engineering and Applied Science, asked, "Why do we have to make it so that the structure or building is separate from the nature it sits in?"

At first, the UVA researchers used their method to make a series of small structures that could stand on their own. These structures looked like beehives. After this was done well, the team moved on to building structures with more parts, like domes.

Barnes did research on soil-based inks with the help of a Harrison Grant from the University of Virginia. Using a 3D printer that fits on a desk, he tried two methods: printing soil and seeds in layers one after the other and mixing the soil and seeds before printing.

Both of these ways worked. Barnes made a prototype that looked a little bit like a Chia pet. It was round and about the size of a soda can.

These efforts showed that 3D-printed soil structures can help plants grow, but they would probably only work for plants that don't need much water.

3D-printed soil tends to lose water more quickly and keeps a stronger grip on the water it has. Because 3D printing makes the environment around the plant drier, we have to incorporate plants that like drier climates. The reason we think this is the case is because the soil gets compacted. When the soil is squeezed through the nozzle, air bubbles are pushed out. When the soil loses air bubbles, it holds onto water more tightly.

Barnes looked at how much water stays in the soil over time and how much energy plants are needed to take the water out to figure out which plants can be grown in 3D-printed soil.

The group decided that stonecrop would be a good material for 3D-printing soil structures. Stonecrop, which is also called the genus sedum, is often used on green roofs. Stonecrop's body is like that of a cactus. It can live with very little water, get dry and almost die, and then come back to life.

The prototypes made by the researchers are starting to look like normal structures made of raw earth. But after a few days, they start to grow and are covered in green.