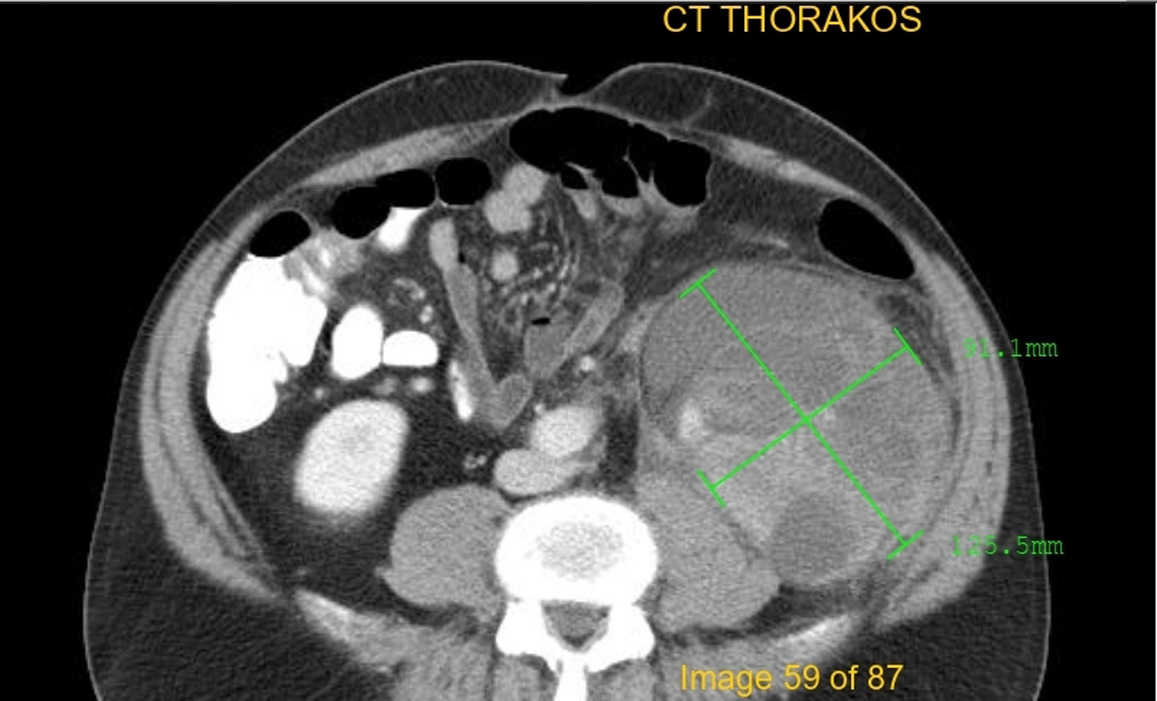 Retroperitoneal liposarcoma (RLS) is an uncommon, physiologically diverse tumor that poses a number of difficulties due to its size and deep location.

Liposarcoma is a prevalent form of soft tissue sarcoma that most commonly affects the extremities, followed closely by the retroperitoneum.

Retroperitoneal liposarcoma is usually asymptomatic until the liposarcoma grows large enough to squeeze the surrounding organs.

It is frequently misdiagnosed because of its rarity and lack of symptoms.

What Is The Anatomy Of The Retroperitoneum?

The retroperitoneum (RP) and pre-peritoneum constitute the extraperitoneal area. The RP space is defined anteriorly by the peritoneal extensions anchoring the transverse colon, small bowel, ascending and descending colon, part of the duodenum, part of the pancreas, and a section of the liver.

The RP is divided into perirenal and (anterior and posterior) pararenal spaces and contains several vital structures: the retroperitoneal organs (the pancreas, kidneys, adrenals, and part of the duodenum, ascending and descending colon), the greater abdominal vessels, the abdominal lymphatics, six major nerves and the autonomic (sympathetic) lumbar chains, and the connective tissue of fasciae, with the White line of Toldt RP masses can be benign, cancerous, or metastatic. Primary retroperitoneal tumors (PRT) start in the RP space, not the organs.

Soft tissue sarcoma (STS) accounts for more than 1% of all adult malignant tumors, with a frequency of 4–5/100,000/year in Europe. RP has 10–15% of adult STS. Liposarcoma occurs in 20% of STS and 50% of RP sarcomas. STS are histologically diverse and have varied prognoses. STS behavior and outcome depend on patient age, tumor site, depth, size, resectability, histology, grade, nodal disease, and distant metastasis (DM).

Even large retroperitoneal soft tissue sarcomas (RPS) seldom metastasize; only approximately 10% have metastatic disease at presentation, which is generally hematogenous and similarly distributed to the lungs or liver.

DM affects the prognosis of all STS. 20–25% of RPS patients had DM, and overall survival is dismal at 13 months. STS and RPS DM depend on tumor grade. Most RPS are low-grade, so DM is rare. Local control and recurrence are the main issues. RPSs are difficult to surgically remove due to their size and position in an anatomically complex area with many important structures.

STS and RPS share no obvious cause. Genetic abnormalities and radiation or chemical exposure are predisposing factors. Genetically predisposed patients are more vulnerable to radiation. In the general population, and especially in children (17–19), repeated computed tomography (CT)-scanning and high-dose ionizing radiation are associated with a higher risk of developing STS, with an estimated incidence of 5% after therapeutic radiation, e.g. for breast cancer, malignant lymphoma, and pediatric cancers.

STS development after external beam radiation therapy (EBRT) is unknown. Most radiation-associated STS are high-grade or poorly differentiated and found at the radiation field's edge, with median latency periods of more than 8 years (range 6–20); fibrosarcoma, osteogenic sarcoma, angiosarcoma, leiomyosarcoma, and undifferentiated pleomorphic sarcoma have been described after EBRT. Toxic chemical exposures have also led to STS, but this is more of historical importance and consists of exposure to phenoxyacetic acid, herbicides, thorium bromide, thorotrast, vinyl chloride, arsenic, asbestos, androgenic-anabolic steroids, dioxins, and chlorophenols.

What Is The Histology And Molecular Biology Of Retroperitoneal Liposarcoma?

Liposarcoma's histological categorization has evolved drastically in recent decades due to advances in molecular genetics.

As a result of the World Health Organization's classification system for soft tissue and bone tumors, there are four major liposarcoma subtypes: atypical, well-differentiated, dedifferentiated, and pleomorphic.

These include lipoma-like (or adipocytic) and sclerosing/inflammatory/spindle cell forms. A wide range of morphological and genetic variations can be found within these four major sub-groups. In the 2013 WHO classification, a fifth subtype (known as "mixed or mixture liposarcoma") has been removed because consensus has been reached that these rare occurrences apparently represent (variants of) dedifferentiated liposarcoma.

Both atypical lipomatous tumors and well-differentiated liposarcomas have the same clinical and molecular characteristics; as such, they should be treated as synonyms.

On the basis of tumor location and resectability, an atypical lipomatous tumor can be used in the treatment of a patient. More than 2 cm of tumor-free surgical margins are extremely uncommon in the RP.

Even without dedifferentiation or metastasis, local recurrence is common and often fatal. There are a few sites where liposarcoma is used instead of the lipomatous tumor. Lipomatous tumors can be diagnosed via histopathology. Besides tumor size and location, the histological subtype of liposarcoma is an important prognostic factor, which highlights the importance of appropriate subclassification.

Surgery is used to treat non-metastatic retroperitoneal liposarcoma. In order to achieve a macroscopically complete resection, it is frequently necessary to remove the abdominal wall, psoas, or paravertebral muscles in one piece. Patients with sarcomas of the soft tissue and bone can benefit from the expertise of the EORTC Soft Tissue and Bone Sarcoma Group and E-Surge. It's unclear if a preoperative biopsy is necessary or if surgical radicality affects local control and long-term survival in any way.

Patients with RLS are usually diagnosed based on their iconographic appearance, and a preoperative biopsy is unnecessary in most cases. Pre-treatment biopsy may not be necessary in patients with resectable retroperitoneal masses. Imaging may reveal an alternate disease that does not necessitate surgery in some patients (lymphoma, Ewing sarcoma, GIST). For individuals at risk of incomplete resection, pretreatment histological confirmation is necessary. An image-guided core or small needle aspiration biopsy is a safe and effective alternative to open or laparoscopic procedures that may raise the risk of tumor leaking and alter tissue planes in these patients.

The Extent Of Surgery Versus Tumor Biology

In RLS, it is impossible to remove the entire tumor with a margin of normal tissue because of significant arteries, nerves, or bone characteristics around the tumor. Three out of every four patients will die as a result of developing a recurrent stomach ailment that occurs only locally. Liberal compartmental and en-bloc excision is recommended by many centers as a way to minimize local recurrence. Due to major ontogenetic differences between normal subcutaneous and visceral (including retroperitoneal) fat tissue, all liposarcomas have an amplification of 12q13–15, which results in overexpression of MDM2 and CDK4. However, the disease's molecular biology is heterogeneous and likely differs between limb and retroperitoneal disease locations. Surgery is rarely useful in treating high-grade, dedifferentiated tumors since they are more likely to recur and spread throughout the body.

RLS recurrence is the major cause of death following an optimal resection of the disease. Adjuvant radiation therapy (RT) may help improve local control in cases of locally advanced or metastatic cancer with involved margins. Radiation or brachytherapy after surgery for extremity soft tissue sarcoma improves local control but not overall survival. This type of cancer is treated in many different ways in retroperitoneal sarcoma trials: different RT doses and fractionations; use of chemotherapy at the same time; different delivery techniques; different timings (pre-, intra-, or postsurgical); and different energy carriers (photons, electrons, protons, or carbon ions).

Radiotherapy in advance of surgery is frequently preferred. Radiation-sensitive tissues and organs that fill the resection bed following a large tumor excision are protected by preoperative radiation. Before surgery, patients are more likely to adhere to and tolerate their medication regimens. When RT is used on tissue that hasn't been damaged and is getting enough oxygen and blood flow, its biological effects are amplified.

Advanced or metastatic soft-tissue sarcoma is treated with chemotherapy. Doxorubicin, epirubicin, and ifosfamide are effective anthracyclines. In the second or third-line treatment of resistant disease, gemcitabine, docetaxel, trabectedin, and pazopanib are viable options. STS chemosensitivity is influenced by the tumor's histological type and grade. Angiosarcomas, leiomyosarcomas, and desmoid tumors react to paclitaxel and liposomal doxorubicin, gemcitabine and docetaxel, and liposomal doxorubicin, respectively. Chemosensibility of liposarcoma is influenced by its histological subtype and grade.

What Is The Survival Rate For Retroperitoneal Sarcoma?

Retroperitoneal sarcomas (RPS) have a poor prognosis, with a 5-year overall survival rate of 36–58% and a natural history of late recurrences. It's typical for RPS to go undetected until they've grown to enormous proportions.

These connective tissues include fat and muscle, as well as blood vessels and fibrous tissue. Sarcoma is a rare malignancy. Approximately 20% of sarcomas are found in the retroperitoneum, or the area behind the kidneys in the back of the abdomen.

Can You Have Liposarcoma For Years?

The disease may be managed for the rest of one's life with the use of these medicines. For at least ten years following your liposarcoma therapy, you should schedule regular checkups with your physician. In the event of new tumor growth, your doctor can immediately treat you.

How Does Liposarcoma Cause Death?

As rare as it is, retroperitoneal liposarcoma is quite variable in its histology. The therapeutic strategy is guided by the proper staging and grading of the condition. Resection that is macroscopically complete gives patients the best chance of a long-term, cancer-free life. Extensive, "compartmental" resection in these individuals is still not well characterized, but disease biology influences it. The EORTC is now recruiting participants for a prospective, randomized trial on the use of preoperative radiation to reduce the incidence of local recurrence. Sarcoma's molecular pathways are being unraveled at the same time as various targeted medicines are being developed that could one day contribute to the available systemic treatments.