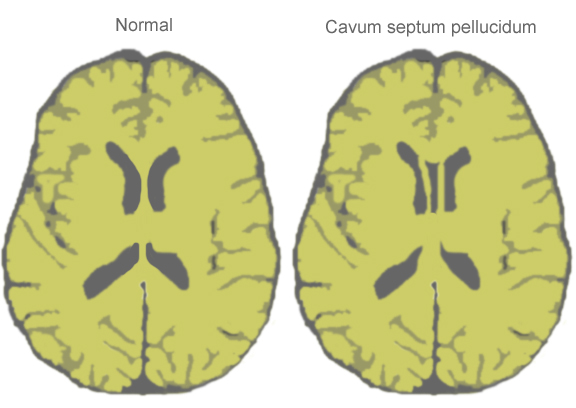 Septum cavum pellucidum is a possible space between the septum pellucidum's membrane leaves separated by at least 1 mm and is considered a typical anatomical variation.

It contains a cerebrospinal fluid filtrate transported from the ventricles through the septal laminae and has no communication with the subarachnoid space.

It may sometimes connect to a more posterior cavity termed cavum vergae, although they are separated by an arbitrary vertical plane produced by the fornix columns.

In the past, septum cavum pellucidum and cavum vergae were wrongly referred to as the fifth and sixth ventricles. Both are not part of the ventricular system since they have a separate embryological origin and lack an ependymal or choroid plexus lining.

The septum pellucidum is a thin, triangular, double membrane that separates the frontal horns of the right and left ventricles. Its apex is near the foramen of Monro, and its base is towards the quadrigeminal cistern. A septum cavum pellucidum cyst is described as a fluid-containing entity between lateral ventricles at least 10 mm wide or has ventricular wall lateral bending.

The septum pellucidum (Latin for "translucent wall"), also known as the ventricle of Sylvius, is a thin, triangular double membrane that separates the frontal horns of the brain's right and left lateral ventricles. Its breadth ranges from 1.5 to 3.0 mm and spans between the anterior section of the corpus callosum and the body of the fornix.

The septum pellucidum is a vital limbic system component connecting to the medial and basolateral limbic circuits. Diseases affecting the septum cavum pellucidum might induce symptoms via a mass impact or disrupt the limbic system's emotional and behavioral activities.

Despite popular belief, the septum pellucidum is more than merely a neuronal tract that links the corpus callosum and fornix. As shown by symptoms of mental retardation and learning difficulties found with septum pellucidum lesions, it is a comlimbic system component that works as a relay station to the primary hippocampus and hypothalamus nuclei.

The cavum septum pellucidum is a common anatomic variation that is frequently asymptomatic and only identified by chance. Cavum vergae is the name given to the CSP's posterior expansion.

The septum cavum pellucidum fuses within three to six months of life in more than 85% of instances.

The septum cavum pellucidum prevalence rapidly drops after birth, reaching 85% at one month, 45% at two months, and 15% at three to six months. It closes caudally to rostrally, resulting in the obliteration of the caudal part first (at 38 weeks of gestation).

The anterior section only disappears by three to six months of age, owing to the fast expansion of the corpus callosum and hippocampus alvei, as well as the concrescence of cerebral hemispheres, which leads to the fusion of the septum pellucidum membranes. Cavum vergae is found in around 30% of neonates and remains in just 1% of adults.

The most prevalent and persistent symptom associated with septum cavum pellucidum cysts is headache, which is caused by intermittent hydrocephalus caused by postural changes and other movements that increase intracranial pressure (Valsalva, straining, etc.).

Gradually growing cysts may cause visual, behavioral, or autonomic problems. While most septum cavum pellucidum cysts are found by chance, they tend to stay asymptomatic despite the bulk impact. The most prevalent symptom, however, is headache, and a direct relationship to the cyst becomes an exclusion diagnosis.

The septum pellucidum (SP) is produced in the folds of the primordium hippocampus during the eighth week of embryonic development and is crossed by the corpus callosum (CC). The laminae are two membranes that make up the lateral ventricle's wall. It is a component of the limbic system that is filled with cerebrospinal fluid.

The absence of septum pellucidum (ASP) is an uncommon condition that affects brain anatomy. It is either solitary or linked to a variety of congenital brain abnormalities. A second-trimester ultrasound may be used to diagnose ASP.

Prenatal counseling is hopeful about neurological prognosis when the ASP is isolated, although there is a 20% chance of septooptic dysplasia in the neonate.

The imaging of a normal cavum septi pellucidi (CSP) is a significant marker in the fetal brain's second and third-trimester prenatal ultrasonography examination, providing confidence in normal central forebrain development.

When the septum cavum pellucidum is not visible, the fetal brain's magnetic resonance imaging (MRI) may confirm and assess related abnormalities.

The following conditions are treated for cavum septum pellucidum:

The primary purpose of therapy is to alleviate the cyst's bulk impact, which is solely surgical.

In open surgical procedures, conventional shunting and stereotactic fenestration are the standard treatments in these situations.

Dandy documented the first treated septum cavum pellucidum cyst in 1931, when he performed a transcallosal fenestration on a 4.5-year-old kid.

Since the initial endoscopic technique was published in 1995, neuroendoscopic fenestration has become a well-established therapeutic alternative and is now the therapy of choice for symptomatic septum cavum pellucidum cysts.

There are three endoscopic methods described:

Endoscopic fenestration is a less intrusive procedure that provides direct vision and efficacy. Inadvertent harm is avoided via direct viewing of neuronal and circulatory systems.

It is also critical to examine the Monro foramina for any adhesions that may be causing the hydrocephalus to remain after the cyst has been successfully drained. Furthermore, this approach eliminates the requirement for a shunt and allows for a biopsy of the cyst walls.

The presence of septum cavum pellucidum and cavum vergae may influence cerebral endoscopic surgical route selection, with the transcavum interforniceal path favored over the transforaminal approach into the third ventricle.

Symptomatic cavum septum pellucidum hypertrophy is uncommon and most usually produces intermittent obstructive hydrocephalus with headache and loss of consciousness. It may be treated surgically by cyst puncture or shunting, ventriculoperitoneal shunting, or radical excision.

Does Everyone Have Cavum Septum Pellucidum?

At What Age Does The Cavum Septum Pellucidum Close?

The cavum is present in all newborns. However, it usually closes within 5 months.

How Do You Treat Cavum Septum Pellucidum?

What Does The Cavum Septum Pellucidum Do?

Diseases affecting the cavum septum pellucidum might induce symptoms via a mass impact or disrupt the limbic system's emotional and behavioral activities.