Tesamorelin – Benefits And Potential Side Effects 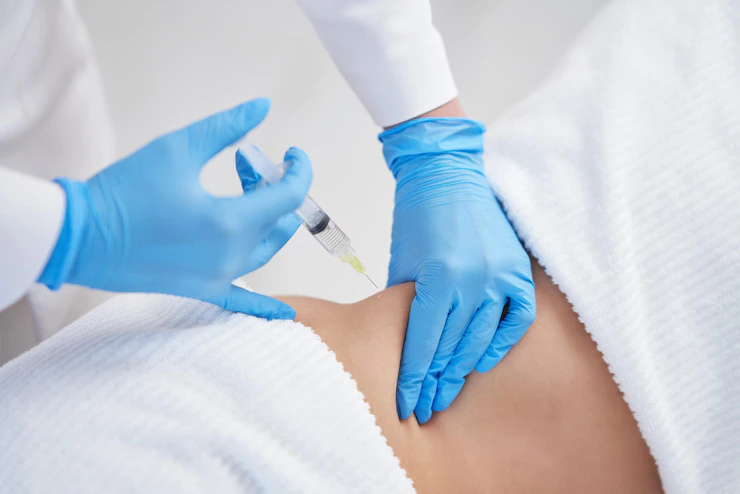 Tesamorelin is a synthetic growth hormone-releasing hormone analog used to treat visceral adiposity in HIV-infected individuals with lipodystrophy. Tesamorelin is administered subcutaneously and has significant effects on glucose and lipid metabolism, although it has not been associated with blood aminotransferase increases or clinically visible acute liver impairment.

Tesamorelin is a 44 amino acid synthetic polypeptide counterpart of growth hormone-releasing hormone (GHRH). Compared to natural GHRH, the N terminal region of the molecule has been changed to increase its stability and pharmacokinetics.

Tesamorelin activates GHRH receptors in the pituitary, resulting in the creation and release of growth hormone, which affects a variety of cells throughout the body, including hepatocytes, where it increases the production of insulin-like growth factor-1 (IGF-1).

IGF-1 mediates several of the actions of growth hormone, including growth, prevention of programmed cell death, glucose updating, and lipolysis in the liver. Serum IGF-1 levels are often low in people with obesity, diabetes, and, in particular, lipodystrophy.

Tesamorelin was tested and shown to be beneficial in reducing visceral adiposity in individuals with lipodystrophy associated with antiretroviral treatment for HIV infection.

Tesamorelin was licensed for use as a medication to decrease extra belly fat in HIV-infected individuals with antiviral drug-related lipodystrophy in the United States in 2010. Tesamorelin is also being studied as a potential treatment for insulin resistance, obesity, and nonalcoholic fatty liver.

Tesamorelin is available as a solution under the trade name Egrifta. The suggested daily dosage is 2 mg administered subcutaneously. Although injection site reactions, itching, arthralgia, myalgia, and peripheral edema are uncommon, they may occur.

Tesamorelin is a molecule that has been N-terminally modified based on the 44 amino acid sequence of human GHRH. This synthetically modified version is more powerful and stable than the original peptide.

It is also more resistant to dipeptidyl aminopeptidase cleavage than human GHRH. It increases the insulin-like growth factor (IGF-1), which promotes the manufacture and release of endogenous growth hormones.

The released growth hormones then attach to receptors on numerous human organs, regulating body composition. This control is primarily due to the interaction of anabolic and lipolytic processes. However, it has been shown that the primary functions by which Tesamorelin decreases body fat mass are lipolysis followed by triglyceride reduction.

How To Get Tesamorelin

Tesamorelin injection is available as a powder that must be combined with the liquid given with your prescription before being administered subcutaneously (under the skin).

It is typically injected once daily. Use the tesamorelin injection at the same time each day. Follow the instructions on your prescription label exactly, and ask your doctor or pharmacist to clarify any parts you don't understand.

Tesamorelin injection should be used precisely as indicated. Do not use more or less of it, or use it more often than your doctor has suggested.

Before using tesamorelin injection for the first time, read the patient information provided by the manufacturer.

Your medicine is packaged in two boxes: one containing tesamorelin injectable vials and the other containing vials containing liquid to mix with the drug, needles, and syringes.

Tesamorelin should not be injected into any locations with firm bumps from prior injections. To avoid bruising and discomfort, place each injection in a separate part. Keep note of where you inject tesamorelin and avoid injecting it in the same location twice in a succession.

Tesamorelin injection reduces the amount of excess fat in the stomach region in persons with HIV who have lipodystrophy (increased body fat in certain areas of the body).

A drug may have inevitable unintended side effects in addition to its intended benefits. Although not all of these adverse effects are possible, they may need medical treatment if they occur. Consult your doctor right away if any of the following negative symptoms arise:

Other adverse effects that have not been described may occur in some people. Check with your doctor if you detect any additional side effects.

Tesamorelin medication is not recommended during pregnancy since it may promote glucose intolerance and raise the risk of type 2 diabetes. It is also prohibited during pregnancy (category X) since it may damage the baby. It is also not recommended for individuals with hypothalamic-pituitary axis disruption caused by pituitary gland tumor, brain irradiation, or hypopituitarism.

Inform your doctor and pharmacist about any other prescription and nonprescription drugs, vitamins, nutritional supplements, and herbal items you are now taking or intend to use.

Make sure you include any of the following: Corticosteroids or hormonal steroids such as cortisone, dexamethasone (Decadron, Dexone), estrogen (Premarin, Prempro, others), methylprednisolone (Medrol), prednisone (Deltasone), progesterone (Prometrium), and testosterone (Androderm, Androgel, others). Your doctor may need to adjust the dosage of your drugs or closely monitor you for adverse effects.

Also, inform your doctor if you have or have ever had cancer, a growth, or a tumor. Your doctor may advise you against using tesamorelin injection.

Tell your doctor or dentist that you are taking tesamorelin injection if you are undergoing surgery, including dental surgery.

How Much Tesamorelin Can I Take A Day?

Adults should take 2 milligrams injected under the skin once a day. The doctor must decide the use and dosage for youngsters.

When Should I Take Tesamorelin?

Tesamorelin injection is available as a powder that must be combined with the liquid given with your prescription before being administered subcutaneously (under the skin). It is typically injected once daily. Use the tesamorelin injection at the same time each day.

What Are The Side Effects Of Tesamorelin?

What Is Tesamorelin Used For?

The hormone Tesamorelin is comparable to the one naturally secreted by the hypothalamus gland in the brain. It is used in people infected with the human immunodeficiency virus to remove excess fat (lipodystrophy) in the belly or stomach (HIV).

Overall, Tesamorelin is proven to have several health advantages. However, you must see your medical practitioners before taking any of it. Visit your physicians and healthcare providers regularly to see how you are progressing. Your doctor may prescribe blood testing and other laboratory tests to determine your overall health after using Tesamorelin.