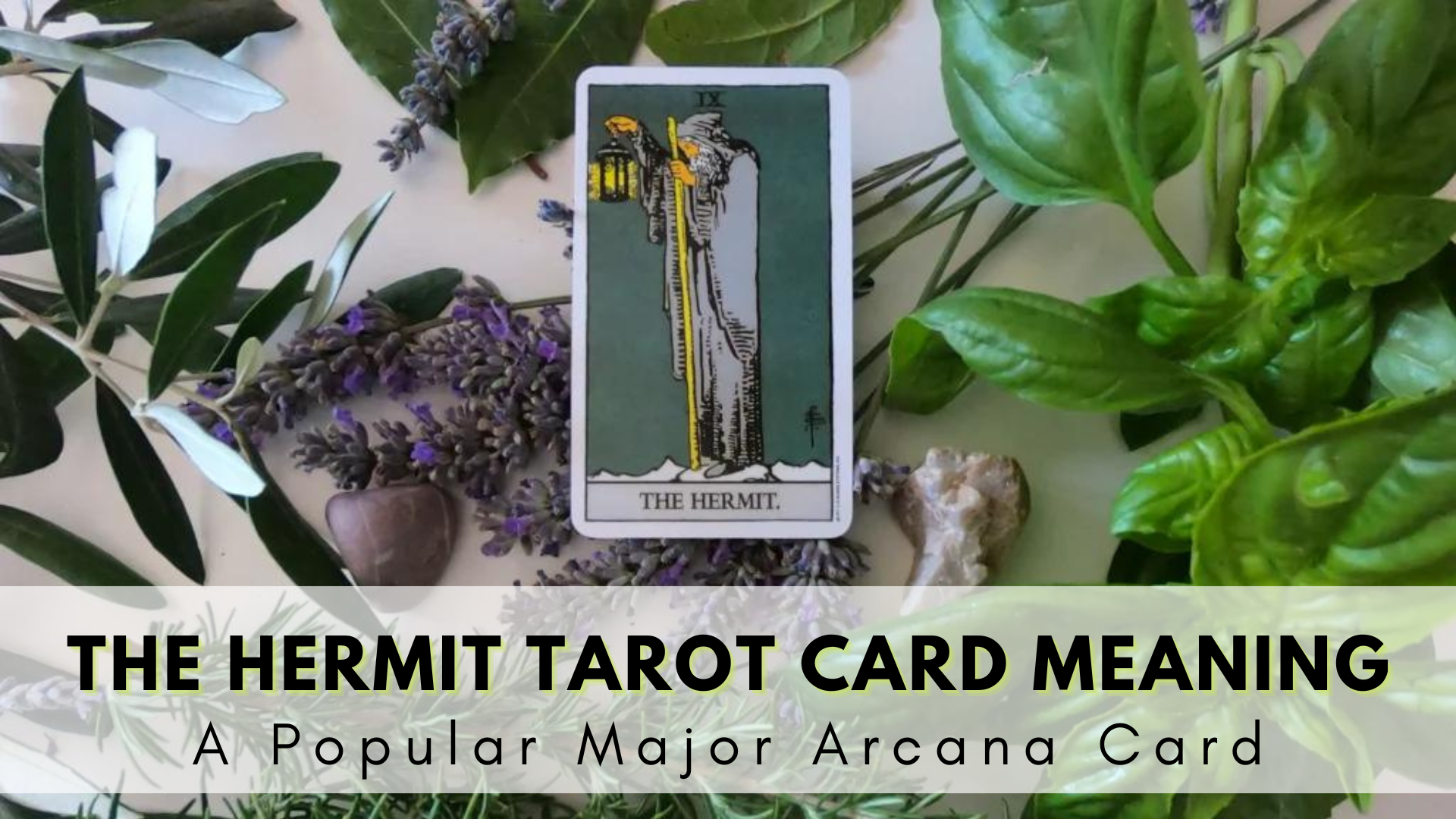 To thrive, you must be able to connect on a deep level with others. Even so, there will be times when we must turn away from others rather than toward them.

The Hermit tarot card meaning was understood by a small percentage of tarot readers though it is a well-known Major Arcana card.

People generally believe that the Hermit card has a negative connotation and evokes unpleasant emotions such as loneliness in their minds. Even if the opposite is also true, the Hermit represents reclaiming your inner authority and living authentically.

There is no one else on the mountaintop except the Hermit. The snow-covered mountain range represents his spiritual awakening, growth, and success. As a result, he has attained a higher level of awareness of his self-discovery journey.

In his right hand, he holds a six-pointed star-shaped lantern. The Seal of Solomon is the name given to this star. The Hermit's path is illuminated by the lamp as he walks along it, but it only reveals the next few feet and not the entire route.

Recognizing that not everything can be revealed at the same time, you must take the first step forward to see where things go from here. The Hermit holds a long staff in his left hand as a symbol of his authority. It represents his subconscious mind, which he uses to both guide and balance himself.

The Keywords Of Hermit Tarot Card

Meaning And Guide For The Hermit Upright Card

Symbolically, the Hermit represents a break from the rat race of daily life and a search for answers hidden deep within your soul. The distractions of the world no longer matter because you've realized that your deepest awareness of truth and knowledge comes from within.

You set out on a journey of self-discovery, guided solely by your spiritual self and the guiding light, leaving each day behind as you progress. Consider a weekend getaway or holy pilgrimage where you can reflect on your personal beliefs and values and get to know yourself better.

Solitude and contemplation are essential for the Hermit. You only need a small, intimate group of like-minded spiritual people to complete this journey on your own or in solitude.

If you allow yourself to be open to it, your inner compass will guide you to the answers you seek. By shining your light on your soul, you can forge your own path.

You'll be able to see enough of what's ahead to know where and when to step next, but not enough to see your entire life path. The best strategy is to take one step at a time.

The Hermit usually appears when you're at a crossroads in your life and considering a new path. Meditation, introspection, and self-examination can help you change the course of your life.

Some of your values, priorities, and objectives will shift as you gain a more spiritual perspective on your life.

The Hermit also represents the desire to withdraw from rampant consumerism or materialistic culture in order to focus on one's inner world.

You may have heard or read about the film and book Into the Wild. Christopher McCandless, a brilliant university student, and athlete, donates his $25,000 savings to charitable organizations. After graduating, he hitchhikes to Alaska to live alone in the wilderness.

This man's journey into the wilderness was similar to that of The Hermit, who seeks answers within and believes they can be found only in solitude and silence.

Finally, The Hermit may appear in your tarot reading as a spiritual guide who can assist you in raising your vibrations and broadening your perspective on life.

This mentor will inspire you to look within yourself for the answers you seek because he is a master in his field. The Hermit is also Major Arcana's Number 9 trump card.

Meaning And Guide For The Hermit Reversed Card

In the case of the Hermit Reversed, you may be under or over-committed during your period of solitude. If you're having trouble connecting with your spiritual side, The Hermit Reversed suggests making more space for meditation and self-reflection.

Take a deeper dive within yourself to discover the greater purpose you were put on this earth to serve. You may have neglected your intuitions and emotions in the midst of the daily grind.

The Hermit's goal for you is to look within your own soul for answers and to regain your spiritual strength.

The Hermit Reversed may indicate that you've already spent a significant amount of time contemplating your own thoughts and feelings. The Reversed Hermit suggests that you are taking the concept of isolation and seclusion far too seriously.

Are you becoming a hermit and cutting ties with the outside world? Even if you're on a spiritual path, maintaining healthy relationships with those around you is critical.

Remember to think about the needs of others as well. You should not become so preoccupied with your own problems that you lose touch with those who are most important to you.

The Hermit Reversed may indicate an unfavorable sense of seclusion in a romantic relationship. There are numerous reasons why one person may wish to withdraw from the relationship bonding while the other wishes to strengthen it.

Respect each other's desire for privacy while still being available to lend a helping hand when needed. A more realistic option is to stay together because the prospect of being alone is too frightening and unpleasant right now.

You both want to stay with each other no matter how difficult things get in your relationship. While it's almost too soon for you to be apart, you're both hoping that everything will work out in the end.

If you have been separated from your companion, the Hermit Reversed card may indicate that you are willing to rekindle your relationship.

The Hermit Yes Or No Tarot Reading

A 'No' answers the Hermit Yes or No reading. Unless you're trying to decide whether or not to pursue spiritual direction, the Hermit is a good place to call it quits.

This is not to say that you won't be able to achieve your goals in the future. You'll need to do some preliminary work before you begin.

Love And Relationships For The Hermit Tarot Card

Do you have trouble getting approval from others? Start working on it. If you want to attract a companion or raise your vibration in life, work on your codependency and security concerns. If you don't, you'll attract someone who shares your problems.

It's fantastic if you're committed and intend to stay that way. But don't worry, Hermit's message is still fresh in your mind.

The Hermit is the deck's most spiritually inclined card. When it comes to spiritual awakening and reaching one's higher self, the Hermit's advice is simple: look inward.

If the Hermit appears in your tarot readings, you should devote your time to spiritual activities such as meditation, communicating with spirit guides, and working with crystals.

Because this is such a personal procedure, isolation may be required. It is not always a bad thing that something is happening.

When you raise your spiritual vibration, everything in your life will flourish. This includes your health, relationships, and financial situation.

Working and earning money are necessary for the majority of people. If you weren't born wealthy or received a financial windfall, you'll certainly have to devote some of your time to look for work. However, you do not have to let your job control your life.

The Hermit's appearance indicates that you may be focusing too much on your career rather than your finances. Instead of concentrating all of your efforts on accumulating wealth, you should seek a happy medium.

Money will not keep you happy if you are working in a job that you are not passionate about. Consider whether you are truly satisfied with your current situation, or if you are simply following the herd.

Drawing The Hermit In Tarot Reading

The interpretation of the Hermit tarot card is finished! If you drew the Hermit card in your tarot spread, did the analysis make sense to you?

Forget about feeling lonely or alone, and instead focus on regaining your self-control and living your life honestly.

What Is The Element Of Hermit Card?

The Earth element is associated with the Hermit tarot.

What Does The Hermit Card In Tarot Mean?

The Hermit represents a state of introspection in which you are seeking solutions within. You require some time away from the stresses of your job to reflect on your own innermost feelings.

What Does The Hermit Card Mean In Love?

The Hermit tarot love interpretation suggests that we should spend some time alone before getting romantically involved with someone else. You may feel isolated during this time, but it will help you find the love you've been looking for your entire life.

What Planet Is The Hermit Tarot?

The planet Mercury rules over the Hermit tarot card.

Is The Hermit Tarot Card A Yes Or No?

In a Yes or No Tarot reading, for the most part, the Hermit is a 'no.' Unless you are asking if you should seek spiritual guidance or focus on yourself, the Hermit serves as a stop sign. This isn't to say that you can't have what it is you want in the future. However, some preparation must come first.

What Does The Hermit Card Mean In Relationships?

The Hermit tarot love meaning can signal that we may need some time alone in order to develop some insight about ourselves before forming a strong romantic relationship with another person. This period may feel a bit lonely, but it will place you on the right path to finding a love that you are meant to have

What Element Is The Hermit Card?

In tarot, the earth element has "grounding and stable energy" which allows for growth and change. If you want to understand the Hermit tarot card fully, you also need to consider the numerical and astrological associations the tarot card has. The Hermit is the ninth card in the deck

The tarot card meaning of a Hermit reading tells you to reconsider your options seriously. Moreover, it also tells that you have had a lot on your plate and little time for thought. You have a talent for seeing the bigger picture but need some quiet time to think about the next course of action.