The Magician Tarot Card Meaning - Represents The Power Of Your Desires 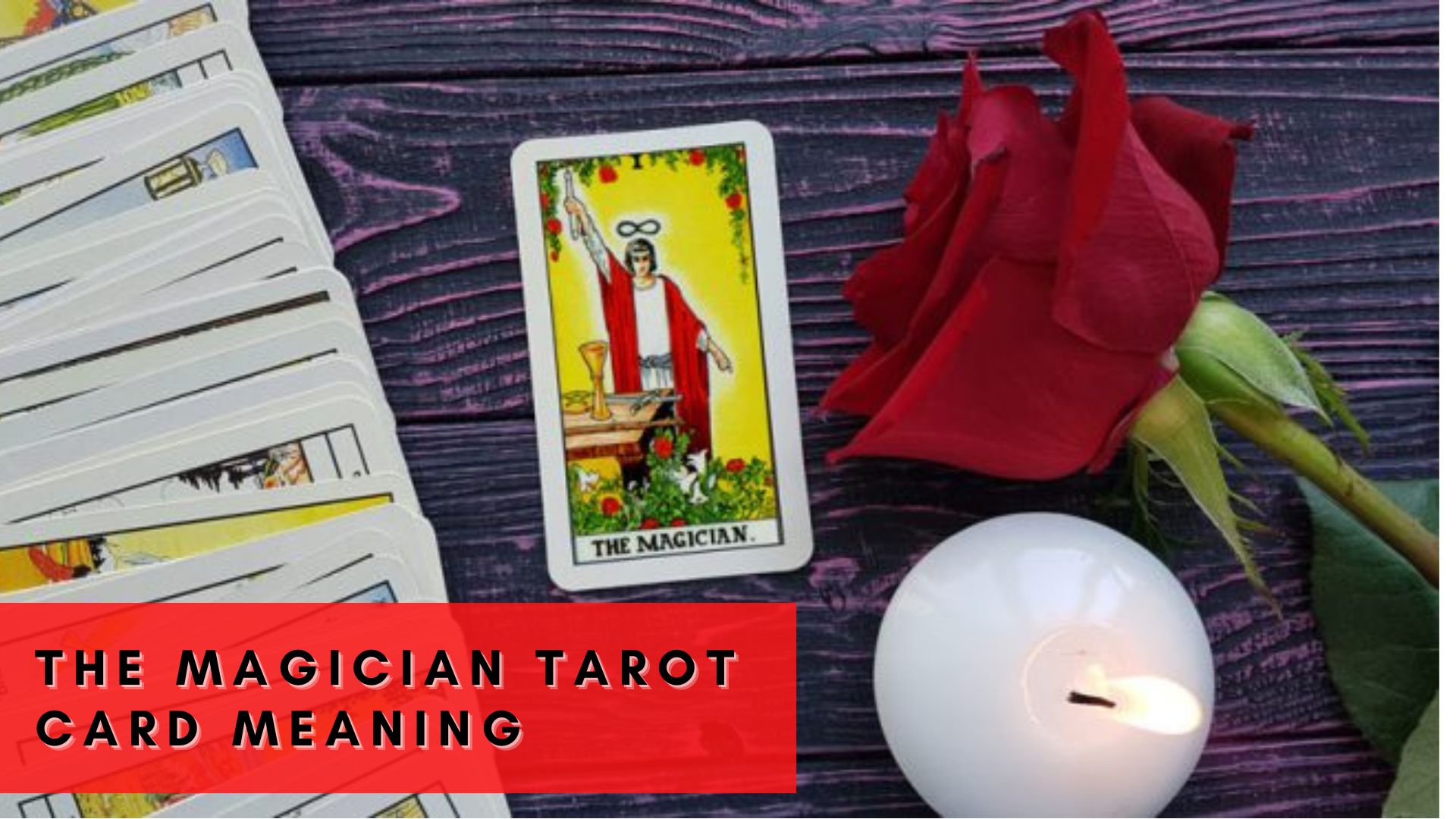 When you see the Magician in your tarot reading, know that your spiritual self is ready to assist you in fulfilling your deepest desires.

The Magician Tarot Card Meaning is an energizing Major Arcana card that represents the power of will and drives to bring your desires to fruition. He gives you the opportunity to put your ideas and abilities into action.

Mercury, the planet of new beginnings and possibilities, is associated with the Magician card. As a result, the Magician is numbered one in the Major Arcana.

He stands with one arm extended upwards toward the sky and the other downwards toward the planet's surface. His posture demonstrates his connection to both the spiritual and physical realms.

The Magician uses this connection to make his visions come true in the real world. He acts as a conduit, allowing energy to be converted into matter. Both the Magician's robe and cloak are red to represent the knowledge and understanding of the world.

The four Tarot suit symbols are arranged on a table in front of him, a cup, pentacle, sword, and wand. Each of these represents one of the four fundamental elements: water, earth, air, and fire. Furthermore, it indicates that he has all of the resources necessary to carry out the plans he has put in motion.

Wrapped around his waist are the infinity symbol over his head and a snake devouring its own tail. These indicate that he is exposed to an infinite number of possibilities. In the foreground, there is also a flowerbed, which represents the realization of his hopes and dreams.

Keywords Of The Magician Tarot

Before delving deeper into the Magician tarot card's significance and most significant card pairings, it's critical to understand a few facts and keywords about it.

When you work with The Magician, you will gain the knowledge, resources, and energy to make your dreams a reality. There is nothing you don't have right now. As a result, the Magician is also known as a Master Manifestor.

You can manifest your desires because you have all of the resources you need: spiritual, physical, mental, and emotional. When you combine your spiritual and physical energies, your ability to manifest will skyrocket!

It is critical to combine these tools in such a way that the impact of what you produce is maximized. The purest form of alchemy can be found here!

An opportunity has presented itself for you to pursue a concept about which you recently had an epiphany. The only way to bring your desire to fruition is to take action, and the seed has sprouted.

You've gotten this far in your life because of the skills, knowledge, and abilities you've gained along the way, and whether you realize it or not, you're ready to put your ideas into action.

Before you take any action, you must be certain of what you want to do and why you want to do it. Your ambitions must have a spiritual component. Otherwise, you will fail because you are only motivated by ego, money, prestige, and fame.

When your daily actions align with your Higher Self, you have a one-of-a-kind opportunity to create the future you truly desire.

The Magician allows you to take inspired action once you've determined your "what" and "why." To succeed, you must pay close attention and focus your energy.

Emphasize the one thing that will bring you closer to your goal and keep you on track. Drop anything that might divert your attention from your goal if you truly want to succeed.

Schedule your day in a systematic manner to ensure that you stay on track and complete your tasks.

Meaning And Guide Of The Magician Reversed Card

You're thinking about manifesting your goals, but you haven't taken any action yet, according to The Magician Reversed. You're not sure what you need or how to get it, and you're not sure if you have everything you'll need.

If you concentrate on what you want to happen, the Universe will figure it out. Listen to your gut instincts and seize any opportunities that arise. In other words, these are the "breadcrumbs" that will lead you to your ultimate goal.

Seeing The Magician Reversed indicates that you are having difficulty seeing progress or accomplishment in your goal. There could be several factors at work. You may have an idea but are unsure how to put it into action.

Because you don't know what you want, your efforts may be completely misguided or misplaced. It's possible that you've lost sight of your "why," or that it wasn't compelling enough, and as a result, you're lacking the motivation to finish the task.

It's also possible that your ultimate goal isn't in your best interests, in which case the Universe may be telling you to "Stop! Go Back!"

The worst possible interpretations of The Magician Reversed are greed, deception, and deceit. As long as you are disconnected from your Spiritual Self, you can only manifest for your own benefit at the expense of others.

You may unintentionally fall victim to its trap. Pay attention to your goals and ask if you are striving for the greater good or just for yourself to determine whether something is "odd."

The Magician Reversed is a career card that indicates that you have a diverse set of skills, abilities, and potential but are not making the most of them.

I'm sure you'll realize you're capable of so much more. Another possibility is that you are exceptional at something but have not allowed yourself the time or space to develop and hone your skill.

Your abilities aren't being used for some reason. What must you do to reach your full potential?

Yes Or No Tarot Reading Of The Magician Card

If you want it, you can have it. Yes, but are you willing to think outside the box in order to obtain it?

When doing a 'yes-or-no' reading, drawing the Magician indicates positivity. Before you begin, only do it if your heart truly desires it.

The Magician card can foretell great things in money or career readings if you use your cards correctly. This card is especially useful in inquiries about starting a business or inventing something.

When it comes to making money, investing, or climbing the corporate ladder, it's as if something magical happens. Meditation can help you align yourself with the best possible opportunities.

Seeking a mentor is a wise decision if you want to avoid making the same mistakes as those who came before you.

The primary goal of a Magician is to create and improve. Expect a major shift in the near future if you've recently been ill or have been dealing with mental or physical challenges.

Even if a solution is difficult to find, being resourceful and utilizing all available help will enable you to resolve any persistent physical issue.

The Magician Tarot represents a connection to your own strength and a willingness to accept yourself for who you truly are in spiritual practices.

While getting feedback from others is beneficial, we already have an internal guidance system that knows what is best for us in most situations. All we need to do is remain silent long enough to hear what is being said.

Is the Magician Tarot card a good love card? This is a question that many people who do love reading and pull this card ask.

If the Magician appears in your future, you're likely to be swept off your feet by someone suave and charming.

This is a fast-paced love story with the feel of a children's classic. If it hasn't already happened, it will in the near future. The number of factors will determine whether or not this partnership can withstand the test of time.

Magicians in the tarot often represent people who use their charm and charisma to deceive others. What gives you a gut feeling?

Investigate the magician's true motivations by examining the cards he's holding around him. Whatever happens, this relationship will change your life.

The Magician Card And Astrology

Virgos, like the Magician, are completely dedicated to their creative endeavors. Geminis are quick, clever, and obsessed with communication.

In alchemy, quicksilver (Mercury) is also associated with transformations and the fifth element of ether. The Magician's waist is also adorned with a snake, which represents this element.

The Magician tarot card, as the first in the deck, represents mental prowess, originality, and a magnetic pull. How do you get started manifesting? It all starts with a single digit.

Being unified on a subject rather than divided. Concentrated attention. It's entirely up to you. To begin, one is the most basic number. Number one here represents open-mindedness.

The Magician In Tarot Readings

Here are some of the most frequently asked Magician card questions.

What Does The Magician In A Love Tarot Reading Indicate?

If you are single, The Magician suggests that this is an excellent opportunity to meet someone new.

What Is the Magician's Meaning?

When the Magician appears in a tarot spread, it indicates that the questioner possesses the qualities, abilities, and resources required for success. The message is to use one's full potential rather than limiting oneself, especially if one needs to change anything in one's surroundings.

What Does the Magician Tarot Card Indicate?

In that it refers to the act of manifesting things, the Magician tarot's meaning in love is similar to its general meaning. Talent, imagination, passion, and determination will determine success in love. When it comes to love, the Magician recommends taking action and making opportunities to meet someone you want to meet.