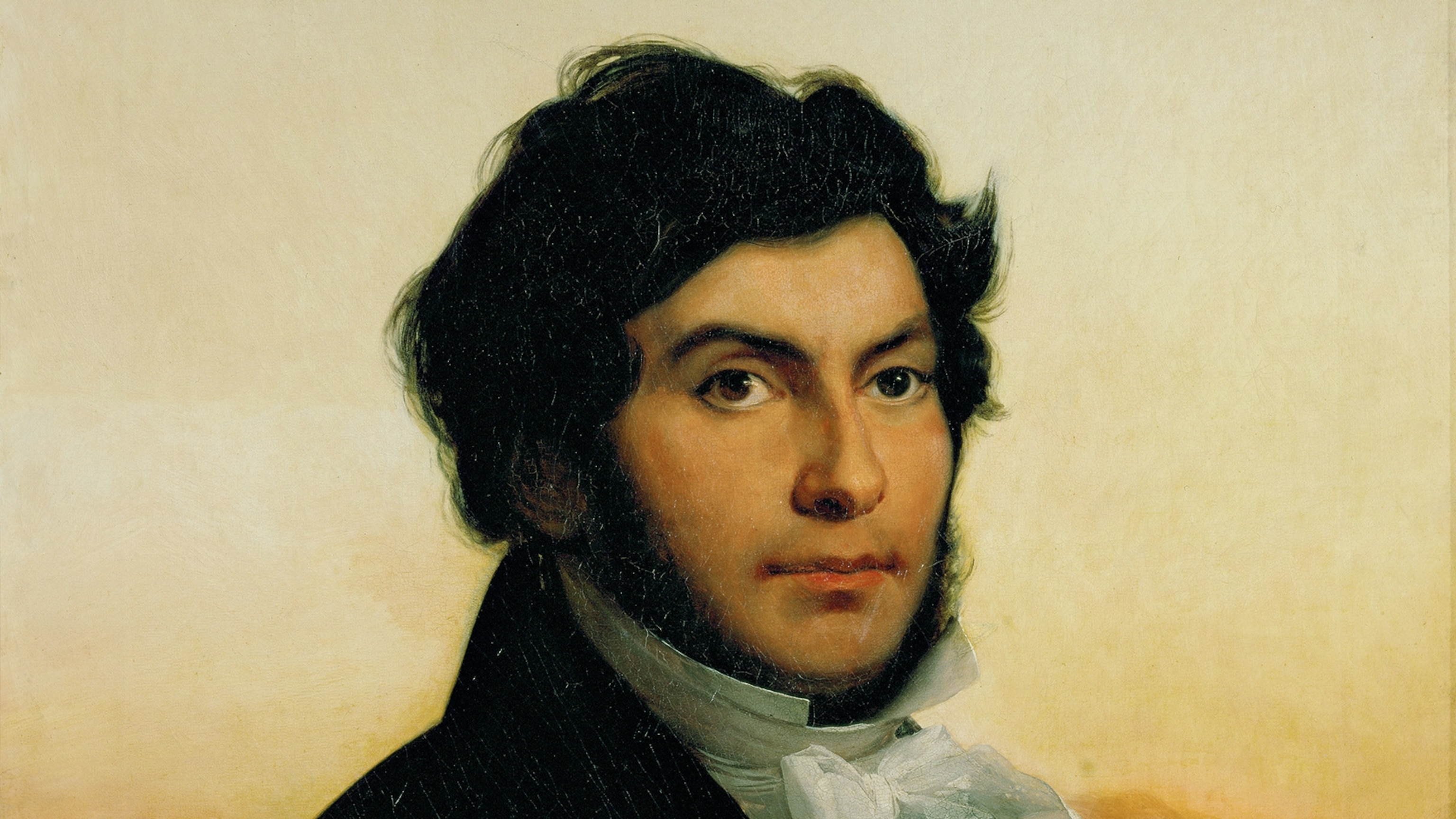 Both of these things stood out in the 1806 presentation given to the Académie de Grenoble in eastern France.

To begin with, the author was a teenager of only 16 years old. Secondly, the remarkably literate young person made a highly controversial assertion.

He thought that the African language Coptic was where the old Egyptian language had survived.

The young scholar's observations would subsequently lead to the solving of one of the biggest scholarly riddles of the 19th century, although his initial claim would turn out to be incorrect (Coptic is not identical to ancient Egyptian, but developed from it).

The young scholar was named Jean-François Champollion, and he was born in the southern French town of Figeac in 179.

The events of the French Revolution, the Terror, and the emergence of Napoleon Bonaparte shaped his childhood.

Champollion's father, a bookseller, suffered from a severe alcohol addiction.

His older brother Jacques-Joseph was a huge inspiration and source of motivation for him.

The Secrets Of The Rosetta Stone

In retrospect, an artifact discovered in a faraway place as a child was the catalyst for Champollion's lifelong interest in Coptic. Repairing a fort in the area of Al Rashid (known to the Italians and French as Rosette) in 1799, the year after Napoleon's invasion of Egypt, French soldiers discovered hieroglyphics etched on some of the stones being used in the construction.

They were probably stolen from older buildings and used in the construction of the newer ones. A vigilant officer saw that one of the pieces had hieroglyphs, a block of Greek language, and a third script that could not be deciphered (now known as demotic text).

In Egypt, the fall of hieroglyphic writing culminated towards the end of the fourth century A.D., when the ability to read and write hieroglyphs had all but vanished. The goal of late 18th-century researchers was to decipher them.

The French government's recently established Institut d'Égypte was informed of the stone's existence. If Greek letters turns out to be a translation of the hieroglyphs, the Courier de l'Égypte wrote on September 15, 1799, that this unusual stone might "give the key" to decode the hieroglyphic cipher.

The British were able to overcome Napoleon's army and transport the Rosetta Stone back to England, where it would become the cornerstone of the British Museum's Egyptian collection. The Greek text on the Rosetta Stone has been translated to reveal that it is an edict from the reign of Ptolemy V Epiphanes, who died in 180 B.C.

Ptolemaic kings, who trace their ancestry back to the Greeks and conquered Egypt in the fourth century B.C., spoke Greek and reserved hieroglyphs for religious purposes. At this point, academics from all over the world were racing to begin identifying elements in the corresponding hieroglyphic text by comparing them to the Greek original.

In other words, understanding them would be the key to Egyptian culture and knowledge. Thomas Young, an English scholar, deciphered the hieroglyphs and found the kings' names.

Antoine-Isaac Silvestre de Sacy, a French scholar, and Johan Kerblad, a Swedish diplomat, deciphered the Rosetta Stone and other texts by deciphering the phonetic indications in the names of kings and queens written in cartouches (the oval form that carried royal names).

After relocating from Grenoble to Paris, 17-year-old Champollion was given to Silvestre de Sacy as a student in 1807. The young learner must have been thrilled: The Egyptian treasures brought back by Napoleon were on display all throughout the French capital, and the publishing of the Description de l'Égypte, complete with numerous illustrations of the inscriptions, was underway.

Through his study of several texts that had been shipped to Paris from the Vatican collection in Rome, Champollion was able to satiate his insatiable appetite for all things Coptic. He finished his Coptic dictionary in 1815, just in time to give it to Napoleon before the latter's loss at Waterloo.

Champollion believed that his extensive understanding of Coptic would be the key to deciphering hieroglyphs, despite Coptic being written in largely Greek-derived letters and retaining some of the linguistic structures and lexicon of the ancient language.

Champollion, who was already familiar with Young's work, analyzed the inscriptions on Rosetta and a Philae obelisk. This obelisk had been relocated from Egypt to Kingston Lacy, England, and featured inscriptions in both Greek and hieroglyphics.

Champollion and other researchers made significant progress, but they were unable to decipher the meaning of the hieroglyphs. Scholars in the past assumed the images represented the things they depicted (such as owls, bees, food, gods, buildings, and boats), but "translations" based on this concept ended up being meaningless jumbles of symbols.

The basic single-sound phonetic signals had been recognized by Kerblad, Silvestre de Sacy, Young, and Champollion, but this technique left many more signs unaccounted for, suggesting that the language was not written using a simple alphabet. The discovery made by Champollion is regarded as one of the greatest "aha!" moments in history.

In a hieroglyphic writing from the Abu Simbel temple complex, which was constructed by Ramses II ("the Great"), he properly decoded the name Ramses on September 14, 1822. Champollion saw the term to be "figurative, metaphorical, and phonetic all at once." I've got it!" he exclaimed triumphantly, overcome with happiness.

Shortly thereafter, he compiled a list of 25 phonetic signs in demotic writing and hieroglyphs and sent it to M. Dacier, secretary of the Académie Royale des Inscriptions et Belles-Lettres in Paris. The word "Ramses" is illustrative of the intricate structure Champollion had created the groundwork for, which is represented in the Greek alphabet by the letters ra-mes-su.

The word ra (in both hieroglyphs and Coptic), means "sun." Mes is a symbol for both sound and meaning (ideogram). Mes was a verb meaning "to give birth to" or "to produce," and su was a pronoun meaning "him." So, in hieroglyphic writing, signs had a variety of meanings and functions.

It's not accurate to characterize these as solely phonetic or symbolic representations. Phonetic signs might represent one, two, or three sounds, while some signs were homophones, using different signs for the same sound. Champollion's monumental contribution to the study of ancient Egyptian writing began with a startling discovery he made in 1822, exactly 200 years ago.

Champollion's work with other manuscripts, his unparalleled understanding of Coptic and other Semitic languages, and his lifelong dedication to his studies provided him an advantage over his English-speaking rivals, notwithstanding his debt to the Rosetta Stone.

The Father Of Egyptology

Late in life, Champollion ventured out of the libraries where he had spent decades conducting meticulous research in order to view the inscriptions in their original locations. His 16-month voyage of Egypt began in August 1828 and took him as far south as the Abu Simbel complex, at the Second Cataract of the Nile.

Champollion kept his brother Jacques-Joseph updated on his travels by writing him a series of letters. He crammed the letters with illustrations, describing his enjoyment of Egyptian clothing, his tour of Abu Simbel in blistering heat, and the preparations he watched for a dish of crocodile meat.

Champollion was a product of his day in his colonialist attitudes and actions: He had a great respect for Egyptian antiquities, yet he nonetheless had a wall panel removed from Seti I's tomb in the Valley of the Kings and shipped back to France.

Champollion's health deteriorated after he returned to his homeland in late 1829. A number of experts believe that the stress of his Egyptian adventures contributed to his chronic disease throughout the remainder of his life.

At age 41, he died in Paris in 1832. The 400-page discussion and accompanying volume of plates featuring words, signs, and sign groups in hieroglyphs, demotic script, and Coptic that make up his 1824 Précis du système hiéroglyphique des anciens Égyptiens represent the greatest contribution to hieroglyphic research made by any scholar at the time. Egyptologists have been able to eavesdrop on the ancient Egyptians' minds thanks to Champollion's decipherment of hieroglyphics, which has allowed them to gain a deeper understanding of the religious and social fabric of ancient Egypt.

What Mystery Did The Discovery Of The Rosetta Stone Solve?

In terms of Egyptology, this is of paramount importance. No one at the time of its discovery had a working knowledge of ancient Egyptian hieroglyphs. Given that the Rosetta Stone's inscriptions say the same thing in three distinct scripts, and that some researchers could still read Ancient Greek, it was used as a crucial key to understanding the hieroglyphs.

Who Broke The Code Of The Hieroglyphs With The Help Of The Rosetta Stone?

However, some 200 years ago, the original Rosetta Stone supplied the key to decoding ancient Egyptian hieroglyphics, the most beautiful and mysterious of all writing systems. It was a young Frenchman named Jean-Francois Champollion who deciphered the code (1790-1832).

What Did The Hieroglyphics Say On The Rosetta Stone?

The Rosetta Stone inscription is a decree (official message) from Pharaoh Ptolemy V, dated to 196 BC. The Memphis temple priests allegedly had the king's back. The English version reads a bit like a rundown of Pharaoh Ptolemy V's favors to Egypt's clergy and populace.

How Did The Rosetta Stone Get Found?

Although the precise date is debatable, a French soldier on July 19, 1799, during Napoleon Bonaparte's Egyptian expedition, discovered a black basalt stone etched with ancient writing near the town of Rosetta, about 35 miles east of Alexandria.

Despite the fact that Champollion's brief life has been extensively researched, little of the famous codebreaker's personal life remains; he appears to have spent the majority of his life in hospitals and libraries. However, he was a staunch Napoleon admirer who was notably prickly and eager to claim credit for an invention that relied in part on the work of others.

Champollion was the first professor of Egyptology at the College of France because, in his latter years, he made it to Egypt and aided in the acquisition of valuable artifacts there and from collectors. Unfortunately, his health (perhaps due to drinking Nile water) declined, and he had a stroke before he could finish his masterpiece, a grammar of ancient Egyptian.