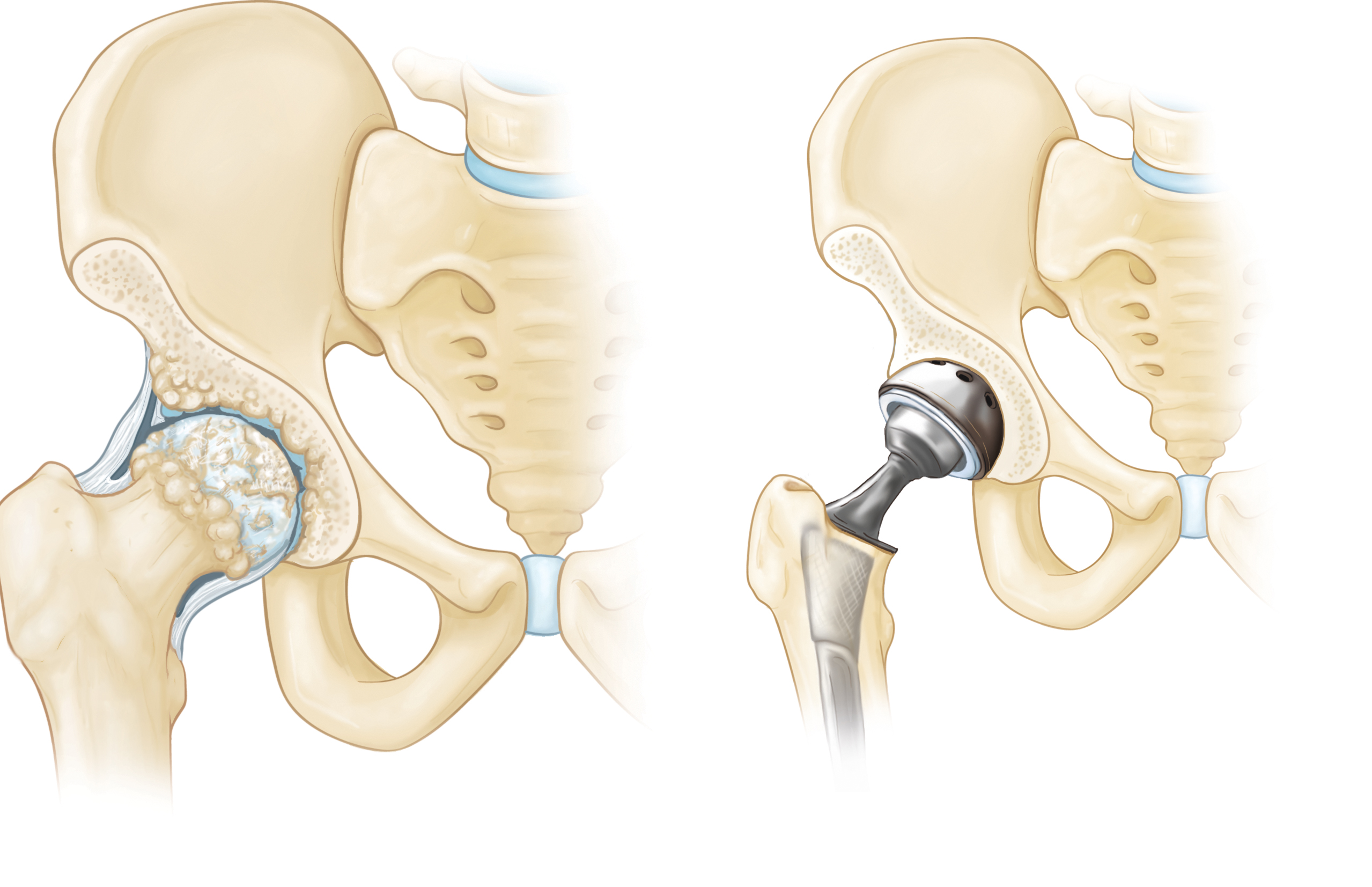 Infection is arguably the most difficult and one of the most common complications following joint replacement.

Despite modern surgical prophylaxis, this complication is becoming more common worldwide. As a result, it's likely that more orthopedic surgeons and other clinicians will run into this issue.

Acute postoperative, acute delayed (haematogenous), and chronic periprosthetic joint infection (PJI) are the most common classifications based on the onset of symptoms and the mechanism of bacterial contamination.

The treatment options are heavily influenced by this simple classification scheme. Recognizing this serious problem as soon as possible is critical, as it could mean the difference between a successful and unsuccessful outcome.

A Clinical Case Of An Immediate Postoperative Period

The right total knee arthroplasty (TKA) was performed on a 73-year-old man who was otherwise healthy. The patient was discharged on the fifth postoperative day after an uneventful few days following the procedure. ESR and CRP were 100 mm/h and 49.2 mg/L, respectively, at the time of discharge.

The patient presented to the outpatient clinic on the 18th postoperative day with a small area of macerated-looking skin wound with scarce serous wound drainage. ESR and CRP levels were 84 mm/h and 6.2 mg/L, respectively, in blood tests, indicating normal leukocytes and elevated ESR and CRP.

The patient was discharged from the hospital without antibiotics and returned a week later. There was a small area of skin necrosis that appeared to be superficial, and there was no drainage or obvious inflammatory signs. CRP was 7.9 mg/L, with an ESR of 102 mm/h.

The rate at which red blood cells settle in one hour is measured by the ESR. It's a non-specific hematological test that's commonly used to gauge inflammation indirectly. CRP is a major acute-phase protein made by the liver that rises in response to inflammation, infection, and other tissue insults like surgery. It's crucial to know the normal kinetic patterns of these markers after uncomplicated arthroplasty to appreciate their importance in the postoperative period.

Both of these markers rise following surgery, as one might expect. Because TKA involves more bone and soft tissue trauma than THA, the peak is significantly higher after TKA than after THA. It is impossible to find a threshold that predicts the presence of infection because of the large interindividual variations in these values.

However, following an uncomplicated arthroplasty, these values should steadily decrease after the initial peak. ESR levels usually peak on the fifth postoperative day and return to preoperative levels by the end of the third month following THA and the ninth month following TKA.

ESR can take up to a year to normalize, according to some studies. CRP, on the other hand, follows a pattern that is similar but much faster. It rises more quickly, peaking on the second or third day, and then rapidly falls by the fifth to seventh day. Returning to normal values takes about three weeks after THA and up to two months after TKA.

Understanding this normal pattern after uncomplicated arthroplasty is crucial to making better use of these inflammatory parameters in the early detection of acute PJI. Despite recent reports casting doubt on the efficacy of irrigation and debridement in eradicating infection in specific situations, it is still widely recommended in acute postoperative infections, particularly in the first 3–4 weeks after surgery. Reopening the joint through the original incision, removing unhealthy tissues, thorough lavage, and exchanging modular components while retaining fixed components are all part of this simple procedure.

A Clinical Case Of A Painful Arthroplasty

A 63-year-old diabetic woman presented with right knee pain. 16 months prior, TKA had been performed. The first few weeks after surgery were uneventful, but she'd been suffering from constant pain since then. There was no stiffness in the knee, and radiographs revealed nothing unusual.

There were never any signs of fever, sinusitis, or inflammation. Blood tests revealed that the ESR was 29 mm/h and the CRP level was 17.3 mg/L. The synovial fluid leukocyte count was 33,250/L (98% neutrophil percentage) after a knee arthrocentesis. A two-stage procedure was recommended after an infection was diagnosed.

It is often difficult to detect PJI before surgery in patients who have a painful total joint replacement. ESR and CRP are frequently used as preliminary tests, despite a low suspicion of PJI, due to their widespread availability. Knowing how to interpret them correctly is crucial.

They also discovered that for all markers, TKA had a higher diagnostic odds ratio than total hip arthroplasty. The main limitation of this study is that the diagnostic thresholds for each marker varied between studies (though the vast majority used ESR > 30 mm/h and CRP > 10 mg/L).

Between Stages Of Treatment

A Clinical Case Between Stages Of Treatment

A 66-year-old man presented with a painful hip and a chronic draining sinus tract communicating with the prosthesis three years after receiving right total hip arthroplasty for primary osteoarthritis. ESR was 17 mm/h and CRP was 14.8 mg/L. The two-stage exchange was chosen after a PJI diagnosis.

Coagulase-negative Staphylococci were found in several intraoperative samples after first-stage surgery. The patient was discharged after two weeks of IV antibiotics and given oral antibiotics for the next four weeks. ESR and CRP levels were measured repeatedly, and the ESR remained elevated.

When Is A New Prosthesis Needed?

Although many studies show that one-stage revision surgery has a positive outcome, two-stage surgery has long been considered the gold standard for the treatment of chronic infections. Debridement, resection of infected implants with or without placement of a temporary antibiotic-impregnated cement spacer, and delayed replantation of a new prosthesis after infection is deemed to be eradicated are all part of the two-stage exchange procedure.

It's still a work in progress to figure out the best time and criteria for reimplantation to ensure low reinfection rates. Most surgeons prefer to wait for ESR and CRP to return to normal before reimplantation, but there is no scientific evidence to support this.

Some researchers have only gone ahead with reimplantation if knee aspirate cultures were negative for bacterial growth, but the high rate of false-negative cultures, which could be due to the prolonged antibiotic treatment, raises concerns.

While reimplanting a new prosthesis in a persistently infected site is a concern, relying too heavily on these serological markers for normalization may result in an excessive and unnecessary time interval between stages, increasing patient morbidity.

In the context of prosthetic joint infection, several other serological markers have been studied. Procalcitonin has been studied in the chronic setting, particularly in the diagnosis of infection. It has a low sensitivity and a negative predictive value, despite having a high specificity (though not as high as CRP).

Another option being researched is interleukin-6. When a cut-off of >10 pg/mL was used, it had excellent sensitivity and specificity for the diagnosis of chronic infection. It also exhibits a similar increase/decrease pattern to CRP in the early uncomplicated postoperative period. The much faster peak and return to normal may be advantageous in theory, allowing for an earlier diagnosis.

Because the expected return to normal after uncomplicated arthroplasty is faster, an infection could theoretically be detected by an increase in IL-6 levels before CRP levels.

These alternatives haven't been studied as thoroughly as ESR and CRP, and they're not as widely available. In a variety of clinical scenarios involving prosthetic joint infections, the latter are simple routine laboratory tests performed around the world that can provide valuable and timely information.

What Do Inflammatory Markers Indicate?

Inflammation in the body is caused by a variety of diseases, including infections, auto-immune conditions, and cancers, and can be detected through blood tests known as "inflammatory markers." The tests can't tell you what's causing the inflammation; it could be something as minor as a virus or something more serious like cancer.

What Does It Mean If Your Inflammation Markers Are High?

Inflammation can be detected by a high level of CRP in the blood. It can be caused by a number of things, including infections and cancer. High CRP levels can also signal inflammation in the heart's arteries, raising the risk of a heart attack.

How Accurate Are Inflammatory Markers?

According to new research, blood tests that detect inflammation are insufficiently sensitive to diagnose serious underlying conditions, with an 85% false positive rate and 50% false negative rate when used for this purpose.

What Is The Normal Value Of CRP?

The concentration of CRP is measured in milligrams per liter (mg/L). The following are typical CRP test results: Normal: Less than 10 mg/L. High: 10 mg/L or highe.

In the treatment of musculoskeletal infections, ESR and CRP tests are very useful. However, the information they provide does not apply to every clinical situation, and it should be interpreted as such. Acute and chronically infected prosthetic joints have different diagnostic thresholds, and hip and knee replacements may have different thresholds as well. During treatment, follow-up measurements can be useful, but complete normalization is not required for a positive outcome.