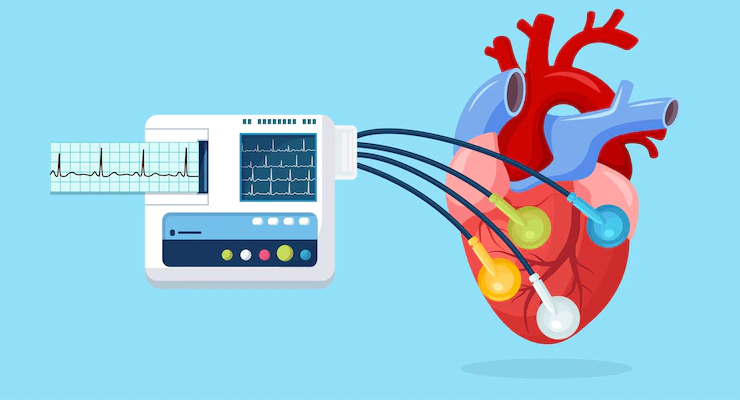 Because each limb lead will "see" the series of depolarization vectors from a different viewpoint, the form of the QRS complex varies (see axial reference system).

The animated picture to the right depicts the appearance of the QRS complex for leads aVF and aVL. These two leads' positive electrodes are at +90° and - 30°, respectively.

The mean electrical axis in this image is around +45°. It is worth noting that aVF has a substantial net positive QRS. Because septal depolarization is not directed away from the lead, there is no Q wave.

A green arrow represents the mean electrical axis in the picture to the right, which displays the identical instantaneous mean vectors as at the top of this page but overlaid on the axial reference system.

Understanding that not every QRS complex has Q, R, and S waves is critical. According to tradition, the Q wave is always negative, while the R wave is the complex's first positive wave. The QRS complex is an R wave if it solely has an upward (positive) deflection. After an R wave, the S wave is the first negative deflection.

The J-point is the intersection of the QRS complex with the ST segment. It might also be regarded as the beginning of the ST section. The J-point (also known as the Junction) is significant because it may be utilized to detect an ST-segment elevation myocardial infarction. A STEMI is diagnosed when the J-point increases at least 2 mm above baseline.

If the waveform moves perpendicular to the line connecting the two electrode locations, no deflection or a biphasic deflection is generated.

Thus, the voltage recorded along a specific lead axis (the vector connecting the - to the + electrode) at a particular time is determined by projecting the vector reflecting the amount and direction of depolarization onto that axis.

As a consequence, when the lead axis in the picture above points from left to right, parallel to the direction of depolarization movement, a positive-going complex arises. When the two directions are anti-parallel, a negative-going complex is formed.

The above ideas may be used to establish how the ECG waveforms emerge at each moment. For example, since the direction of atrial depolarization is almost parallel to the axis of lead II (from RA to LL), a positive-going deflection (P wave) would arise in that lead.

Because the ventricular muscle in the left ventricle is thicker than in the right, the summated depolarization of the two ventricles is downward and toward the left leg, resulting in a positive-going deflection (R-wave) in lead II because the depolarization vector is in the same direction as the lead II axis.

As septal depolarization proceeds from left to right, the depolarization vector is directed towards the - electrode of lead II (RA), resulting in a negative-going deflection (Q-wave).

The following are the major phases of cardiac activation when the ECG is recorded in the lead II.

The cardiac axis is the mean direction of the frontal plane wave of ventricular depolarization evaluated from a zero reference point. The mean QRS axis is calculated by measuring the heights of the QRS waves in the three leads.

The T wave is an indication of ventricular repolarization. In general, the T wave has a positive deflection.

Following the T wave, a minor positive U wave may be noticed. This wave is the final vestige of ventricular repolarization. Inverted T waves or strong U waves imply underlying disease or repolarization-related disorders.

The QT interval indicates the time required for both ventricular depolarization and repolarization, approximating the average ventricular action potential length. This period may vary from 0.20 to 0.40 seconds, depending on heart rate.

At high heart rates, the length of ventricular action potentials shortens, reducing the QT interval. Because extended QT intervals might indicate vulnerability to certain forms of tachyarrhythmias, it is critical to assess if a specific QT interval is abnormally lengthy.

In practice, the QT interval is represented as a "corrected QT (QTc)," which is calculated by dividing the QT interval by the square root of the R-R interval (interval between ventricular depolarizations). This enables a measurement of the QT interval that is not affected by heart rate. Regular adjusted Q-c intervals are fewer than 0.44 seconds.

What Happens During Depolarization Of The Heart?

When Do Ventricles Depolarize?

The isoelectric phase (ST-segment) that follows the QRS and ends at the start of the T wave is when both ventricles are depolarized. This section corresponds closely to the plateau period of ventricular action potentials.

What Is Atrial And Ventricular Depolarization?

When at rest, heart muscle cells are polarized. On the skin surface, depolarization and repolarization of the whole heart may be monitored. An ECG is a kind of measurement. The contraction of the cardiac muscles occurs as the heart depolarizes. Without external stimulation, the cardiac cells will depolarize. Automaticity, or autorhythmicity, is a feature of heart muscle tissue. The cells that originate and spread the contract signal are part of the heart's conducting system, a network of specialized cardiac muscle cells that generate and distribute electrical impulses.