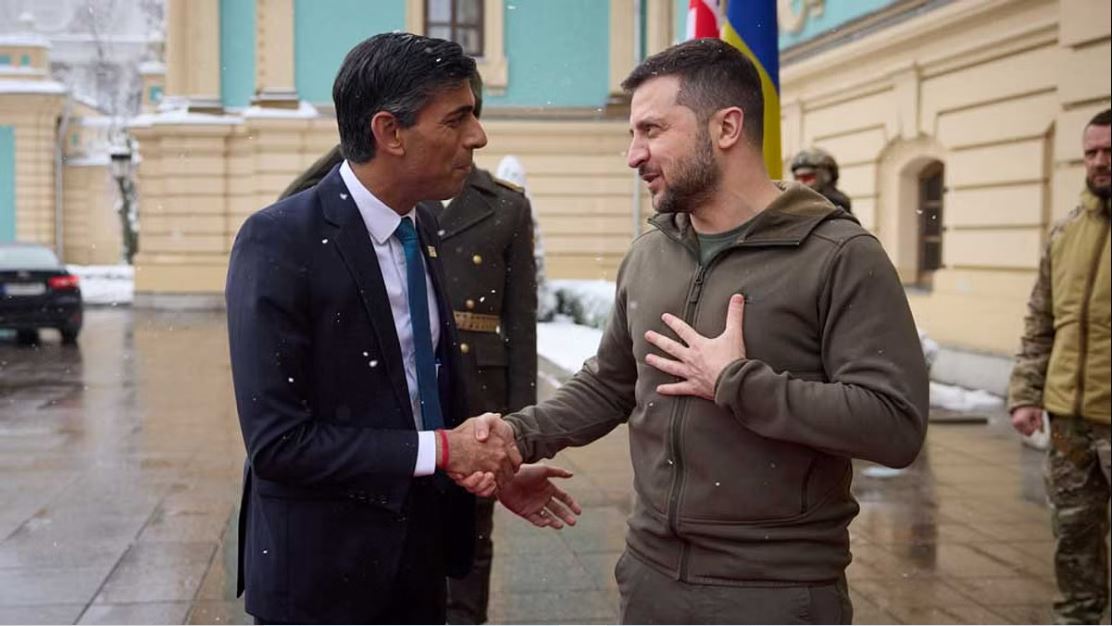 Rishi Sunak promise Ukraine £50 million in defense after meeting President Volodymyr Zelensky during his first trip to Kyiv as prime minister. Mr. Sunak said that being in Kyiv was "deeply humbling" and that the UK would keep supporting Ukraine.

Mr. Zelensky said after the meeting,

Since the first days of the war, Ukraine and the UK have been the strongest of allies.

The goal of the aid package is to stop Russian air attacks.

The £50 million in defense aid includes 125 anti-aircraft guns and technology to stop Iranian drones that can kill people, such as dozens of radars and the ability to use electronic warfare against drones.

Mr. Sunak also said that the UK will offer more training to the Ukrainian military and will send expert army medics and engineers to the area to help. It comes after UK Defense Secretary Ben Wallace said earlier this month that there would be more than 1,000 new anti-air missiles.

During his trip, the prime minister saw drones made in Iran that had been used to target and bomb civilians in Ukraine in the past few months. Mr. Sunak also left flowers for the war dead and lit a candle at a memorial for the people who died in the Holodomor famine in the 1930s. He then went to a fire station to meet emergency workers.

I am proud of how the UK stood with Ukraine from the very beginning. And I am here today to say the UK and our allies will continue to stand with Ukraine, as it fights to end this barbarous war and deliver a just peace.

On the ground, Ukraine's military is able to push back Russian forces, but civilians are being bombed very hard from the air. We are putting in place new air defenses, such as anti-aircraft guns, radar, and anti-drone equipment, and we are giving more help to people in need in preparation for the coming cold, hard winter.

He also said that it was "deeply humbling" to be in the capital of Ukraine and meet people who were "paying such a high price to defend sovereignty and democracy."

Mr. Sunak's promise to send more air defense help is just what President Zelensky would want to hear at a time when, according to the government in Kyiv, Russian airstrikes have destroyed nearly half of the country's energy infrastructure.

The men's hopes for peace and a fair end to the conflict may seem far away, but Mr. Sunak's promise to hold a reconstruction conference for Ukraine next year in London is good news for the government and companies, which need access to international finance badly.

During the visit, Mr. Sunak also said that the World Food Programme would get £12 million to help Ukraine and that the International Organization for Migration would get £4 million.

Downing Street said that the money would help pay for generators and mobile health clinics. The UK would also send tens of thousands of extreme cold winter kits to Ukrainian troops. In the past few months, Ukraine has been asking Western countries for help because Russia has been bombing Kiev and other parts of the country from the air.

Russia fired one of its biggest waves of missiles yet at Ukraine this week, just days after its troops were forced to leave Kherson.

The attacks happened all over Ukraine, from Lviv in the west to Chernihiv in the north.

This week, the G20 summit was held in Indonesia. In a virtual speech, Mr. Zelensky said that he was "convinced that the Russian destructive war must and can be stopped right now."

While Mr. Sunak was at the Bali summit, which was attended by Russia's foreign minister Sergei Lavrov, the UK prime minister urged Russia to "get out of Ukraine" and condemned the country for its "barbaric invasion." He stressed the UK would "back Ukraine for as long as it takes."

Britain is currently the largest provider of military aid to Ukraine aside from the US. So far the UK has committed about £2.3bn and has pledged to match that amount in 2023, according to the House of Commons library.

The UK is also in charge of a program that aims to train 10,000 new and current Ukrainian workers in 120 days.

Mr. Sunak's predecessor Boris Johnson previously met Mr. Zelensky in Kyiv in June and August, and Liz Truss was also a vocal supporter of Ukraine. After he was one of the first people in the world to publicly support Ukraine and send military aid, Mr. Johnson became almost a cult figure there.

So soon into his job as prime minister, Mr. Sunak has a lot to live up to. Many people in Ukraine do not know the new prime minister well and they will want to see how committed he is to supporting the country.