Coronoid Process Of Ulna – It's Anatomy And Function 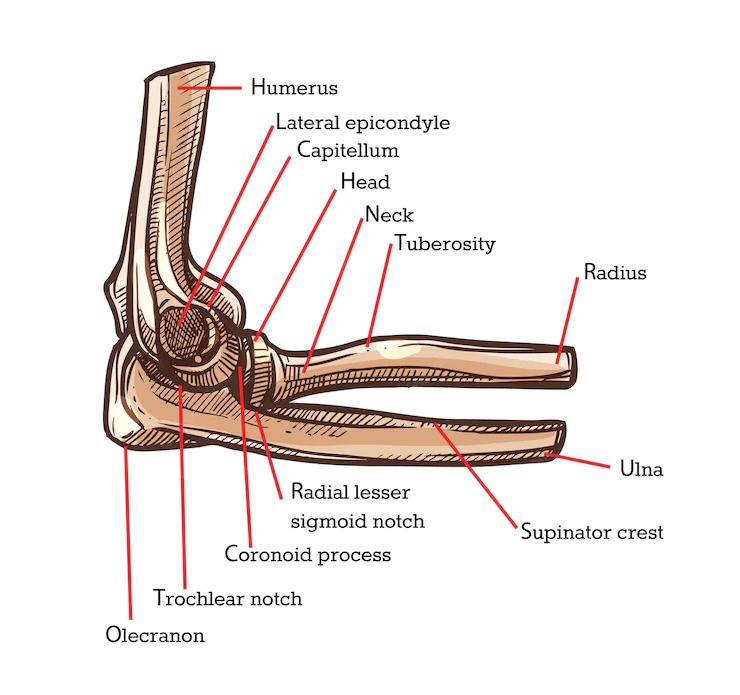 The ulna is one of two bones that comprise the forearm; the other is the radius. It articulates with the radius proximally and distally and creates the elbow joint with the humerus. When the arm is in the anatomical position, it is positioned in the medial forearm. The bigger of the two forearm bones.

Structure Of Coronoid Process Of Ulna

It has a strong foundation that is continuous with the body of the bone.

Its tip is sharp, slightly bent upward, and is received into the coronoid fossa of the humerus during forearm flexion.

It has a smooth, convex top surface that forms the bottom half of the semilunar notch.

Its anteroinferior side is concave, with a rough imprint for the brachialis muscle insertion. The tuberosity of the ulna, which provides insertion to a portion of the brachialis, is located at the intersection of this surface and the front of the body; the oblique cord is linked to the lateral border of this tuberosity.

The radial notch is a thin, oblong articular depression on its lateral side.

Its medial side is used to attach a portion of the ulnar collateral ligament due to its conspicuous, free margin. A slightly rounded eminence at the front of this surface gives origin to one head of the flexor digitorum superficialis muscle; a depression behind the eminence gives basis to part of the flexor digitorum profundus muscle, and a ridge descends from the eminence gives foundation to one head of the pronator teres muscle.

A circular bundle of muscular fibers often emerges from the lower half of the coronoid process to form the flexor pollicis longus muscle.

Function Of Coronoid Process Of Ulna

The styloid process is a pointed bone projection that emerges from the ulnar head and is located distally on the ulna. With the forearm completely pronated, both of these structures may be palpated on the ulnar side of the dorsum of the wrist.

The radial notch, where the head of the radius lies, is located on the lateral side of the coronoid process.

Coronoid process fractures are uncommon, and data is scarce. They are often associated with posterior dislocation of the elbow joint, although they may also occur as separate injuries. The coronoid process is fractured in up to 10% of all elbow dislocation patients. Because the coronoid process and the joint capsule to which it is linked are essential stabilizers of this joint, this may be a risk factor for repeated dislocations.

A significant cause of elbow dislocations is a fall on the extended hand, a common sports injury. The hand is considered stationary while the body generates valgus and posterolateral rotatory forces. As a result, the capsule and ligaments rip gradually from lateral to medial.

They fracture when the radial head and coronoid process collide with the distal humerus. Other damage modes include varus posteromedial injury mechanisms: A fall on the extended arm tears the lateral collateral ligament and fractures the anteromedial facet of the coronoid process. If the medial collateral ligament ruptures, the elbow will dislocate. The radial head may also fracture in such instances.

When treating a type I injury, insert cerclage wire or a No. 5 suture through the ulna drill holes.

Rehabilitation after surgery is contingent on the intraoperative assessment performed immediately after the operation.

A thermoplastic resting splint may be placed with the elbow at 90 degrees and the forearm in a neutral position. This will limit terminal extension to 30 degrees for two to four weeks.

Shoulder abduction should be avoided for four to six weeks to minimize varus moment on the arm. Early vigorous motion may promote dynamic muscle contraction. Once the ulnohumeral joint had been surgically repaired, there was a gap.

Before attempting to reduce the primary ulnar fracture in the olecranon, the coronoid fragment should be repaired using a dorsal plate and screws.

The risk of complications and further operations is significant.

Does The Ulna Have A Coracoid Process?

Where Does The Coronoid Process Take Place?

The terms "coronoid process" and "coronoid structure" are terms that are used to refer to two distinct human body structures. The first one may be discovered on the mandible, which is another name for the jawbone. One of the two coronoid processes may be found on the ulna, a long bone found in the forearm.

What Does The Coronoid Process Do?

What Is The Coronoid Process Of Ulna?

The coronoid process is a triangular prominence that projects forward from the ulna's top and front halves. It has a strong foundation that is continuous with the body of the bone. Its tip is sharp, slightly bent upward, and is received into the coronoid fossa of the humerus during forearm flexion.

Suppose we better understand the coronoid process of the ulna and its fractures. In that case, we will be able to manage them more effectively, which will lead to improved outcomes and a reduction in the likelihood of potential complications such as some degree of stiffness, neuropathy, and arthrosis.