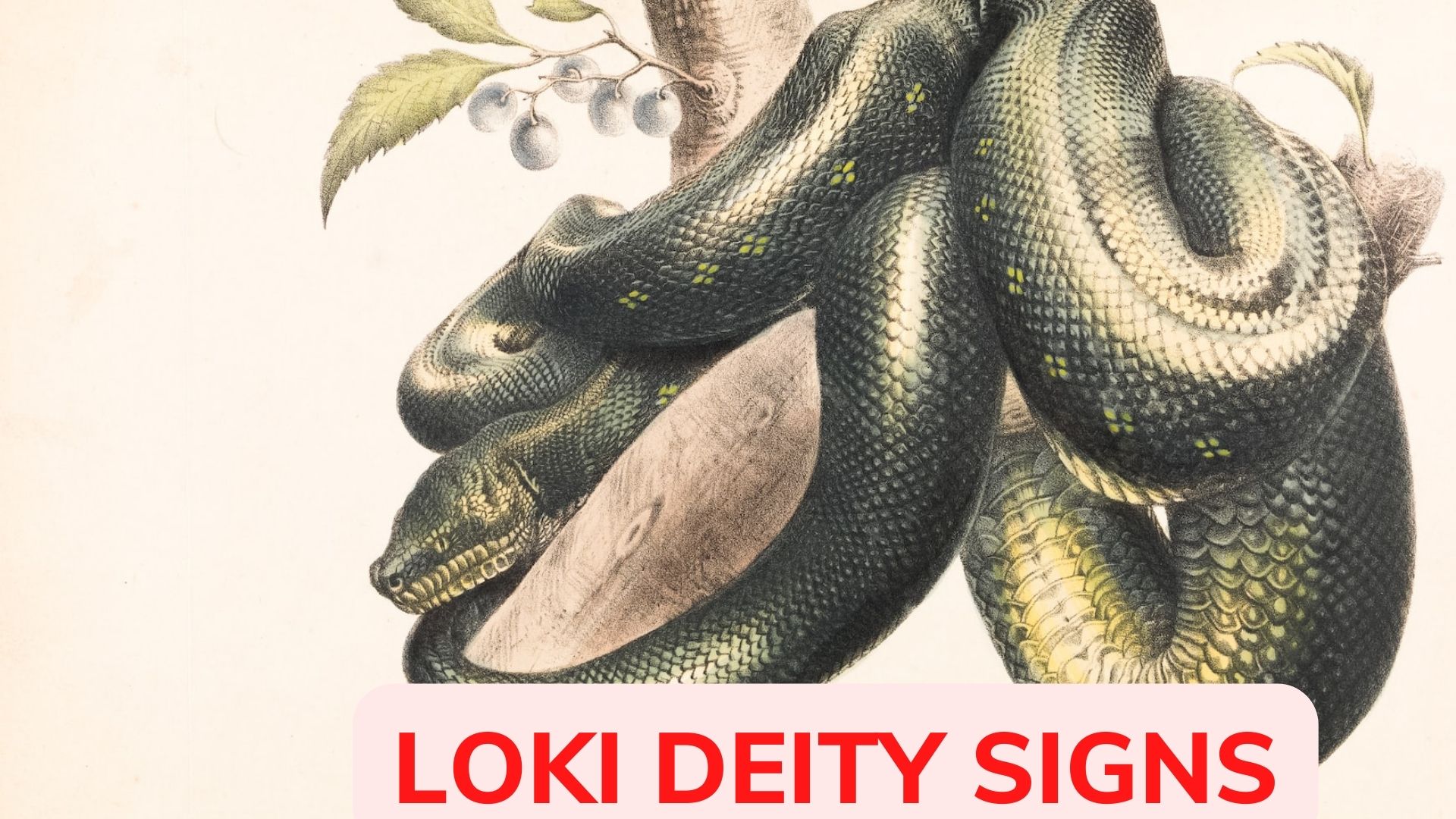 Loki deity signs in ancient faiths are considered to be the most nefarious.

Loki is certainly the deity with the worst reputation in Norse mythology.

Even though Loki is usually shown as Odin's brother and Thor's uncle, he was not a god at all.

Instead, he was either a half-giant or a full-giant who became a god by lying.

Depending on the tale, Loki was the son of the giant Farbauti (meaning Cruel Striker) and the giantess Laufey or Nál (Needle).

As a result, labeling him "a deity" could sound unfair.

He is not the only god with gigantic blood, though.

Many of Asgard's gods had massive ancestors, including the half-giant Odin and the three-quarter-giant Thor.

Loki was a trickster first and foremost, whether he was a deity or a giant.

Loki deity signs are sometimes given credit for "good deeds," but most of the time, the "goodness" of these deeds is just an unintended result of Loki's mischief.

Although Loki only had one kid of his own, he was the father of many more.

One son, the jötunn/giant Nafri or Nari, was born to him through his marriage to the goddess Sigyn (Friend of Victory).

They were destined to play important parts in Ragnarok, the calamity that would bring an end to the Norse world as we know it.

In Norse mythology, Loki was symbolized by the snake, and he was frequently shown as having two snakes entwined around each other in the shape of an S, with one snake biting the tail of the other.

As the snake sheds its skin, it becomes a symbol of metamorphosis.

Norse mythology also says that the huge sea snake Jormungand is related to the god Loki because Loki fathered him with the huge Angrboa.

Thus, Jormungand, also known as Jörmungandr (roughly, "cosmically strong demon," Jörmungand, or Migarsormr, the serpent of Midgard), is the scaled sibling of both Hel, the queen of the dead, and the fabled wolf Fenrir (also known as Hela or Hella).

The spider represents the weaving of a web of deceit similar to the one Loki built.

Loki's story shows that he is both creative and evil, like a spider, because he makes a fishing net that looks like a spider's web.

symbolizing his devastating might and his flame-like eyes when he was most enraged.

Ways To Work With Loki

If Loki calls, you will surely know it.

He uses blunt signals when communicating.

In all honesty, he employs the element from which he originated fire.

It could also be a little terrifying.

It could startle you awake.

But you’ll know it’s him.

If you're unsure, have him clarify it for you.

Research is the best way to start getting to know loki.

Read about him in his mythology, lore, or any relevant historical or archaeological material.

Remember that Loki's redemptive tales are scarce, as stated.

Unless you see his mythology through the prism of symbolism and see beyond the narrative's surface level.

However, keep in mind the Eddas and sagas, such as the Lokasenna and Voluspa.

If you want, make Loki a sacred place.

You now have a hearth-side spot in my kitchen for him.

Believe it is proper to venerate him in the kitchen because he is a fire deity and his ancestors were hearth elementals.

But I'm also going to make room for him on my old-fashioned Norse altar.

If you do decide to place him on your altar with other deities or spirits, Thor and Odin are good choices.

His traveling partner and brother were rather with a pantheon that may not like Loki at all or may not like him at all.

When a birch tree was hit by lightning, Loki was created.

He is said to be a "hot" deity and does appear as fire.

The use of fire is thus the best method to respect him and get to know him.

There are several ways to do this, including cooking over an open flame; sacrificing candles; performing fire poi; engaging in fire scrying; etc.

Just keep in mind to use caution while dealing with this especially erratic element.

You'll notice when dealing with Loki that he likes to bring out those bothersome shadows we usually ignore.

Believe that he naturally possesses this talent, which he frequently employs with the gods themselves.

His mischievous spirit removes things just to give them back in a different shape or to make room for something altogether new to take their place.

The gods are forced to confront their shadows when Loki takes them from them.

They have to reevaluate the value of the things they cherish.

He frequently treats his followers and friends in the same way.

Shapeshifting is a skill shared by almost all gods and spirits that play pranks.

In another, Loki assumes a female persona.

In some, he takes on the form of a hawk.

It makes sense to investigate the domain of shapeshifting if you deal with Loki.

This can be done while in a trance, while astral projecting, or while having lucid dreams during a ceremony.

To me, that makes perfect sense.

To worship the Trickster God, you might want to include the number thirteen in your rituals, offerings, magickal work, and everyday activities.

For instance, if you are skilled with runes, draw thirteen runes; light thirteen candles; yell his name thirteen times; etc.

You are entirely free to decide what you offer Loki and when you give it to him.

However, for any deity you get close to, we advise making consistent weekly offerings.

Numerous Lokeans "experience a side of Loki deity signs that is whimsical and even infantile, but it certainly doesn't imply he isn't a god who can be serious or shouldn't be regarded seriously," claims Loptson.

Mistletoe is hung during Christmas as a sacrifice to Loki.

"A seemingly ludicrous or self-contradictory statement or claim that, upon investigation or explanation, may appear to be well-based or true" is the definition of a paradox.

In many ways, Loki is a living, breathing contradiction who, in many ways, represents the Divine Paradox.

Though he frequently assumes a male form, he is gender-fluid and is capable of taking on any gender he chooses.

However, neither You become more in tune with Loki's genuine nature by investigating your dilemma.

I'm not sure if you have a playful nature by nature.

A few people are.

Most aren't. You like to pull practical jokes on my close relatives.

Things that could startle or startle them briefly serve as a wake-up call.

My teen, for instance, is terrified of dolls.

As a result, occasionally you conceal an old doll in my teenage daughter's room.

Raggedy Ann may be seen gazing up at her as she opens a drawer.

When the mood strikes, pulling harmless pranks on your family will make them laugh and bring back fond memories.

However, keep in mind that there is a proper place, time, and person for this.

The Christmas Devil, also known as Krampus, is well known.

His cloven hooves are starting to make their way throughout the globe.

Furthermore, you could already be considering ways to include him in your holiday celebrations due to his popularity throughout the Christmas season.

How are Krampus and Loki related?

The son of Hel is Krampus.

Thus, he is the grandchild of Loki.

Some academics also think that Krampus is just another form of Loki, the Norse god who came first.

Almost anything may be a source of passion, including talent, love, or ability.

However, Loki will arrive to reawaken the inner fire you have been ignoring.

Something you believed had all but disappeared.

He exhorts you to follow your passion as a roaring fire emerges from the embers and pursue many interests.

The shenanigans and antics of Loki made everyone tense.

The gods chose to confine him after having had enough of him.

Loki decided to leave Asgard after learning about their plans.

On top of a mountain, he built a house with four doors so he could see the gods coming from all sides.

He took the form of a fish during the day to hide.

He constructed a net at night and used it to catch fish for supper.

Odin decided to lead the gods in their quest for Loki after spotting his cunning ruse.

Loki instantly transformed into a salmon to escape when he noticed the approaching gods.

Odin instantly snatched him and firmly held him to the ground, so this did not mislead him.

After a lot of writing and arguing, Loki was finally tied to three huge rocks with chains.

To keep him from fleeing, a venomous snake was placed on the rock above him.

Every time a drop of the snake's poison touched Loki's face, it caused him to tremble and shiver.

Massive earthquakes of this magnitude would occur in Midgard, where people reside.

Sygn, his wife, was holding a dish to collect the poison.

When the dish was full, she would leave his presence and empty it.

Legend says that Loki deity signs will always look like this until the end of time.

When Ragnarok begins, Loki will be able to free himself so that he may work with the giants to destroy the cosmos.

What Is Loki The God Of Norse Mythology?

Loki deity signs, Loki is seen as neither wholly good nor bad because his primary objective was always to bring about chaos.

What Are Loki's Powers In Norse Mythology?

Loki is a master shapeshifter who has taken on a variety of guises, including that of a salmon, a horse, a fly, and his feminine alter ego, ökk.

Is Loki Evil In Norse?

In Norse mythology, Loki is not a bad deity. Although he is a deity of confusion and cunning, he is not bad.

Loki is one of the most well-known and identifiable Norse gods, along with Odin and Thor.

He is now a very well-liked figure in contemporary society.

He is portrayed as a deity who delights in mayhem and cunning tricks.

In Norse mythology, Loki deity signs alternated between being an aid and a hindrance to the other gods.

Nobody was able to pinpoint his true allegiances.

It is impossible to categorize Loki, the Nordic god of mischief, as good or malevolent.

He simply enjoys causing mayhem that is humorous and full of pleasure.