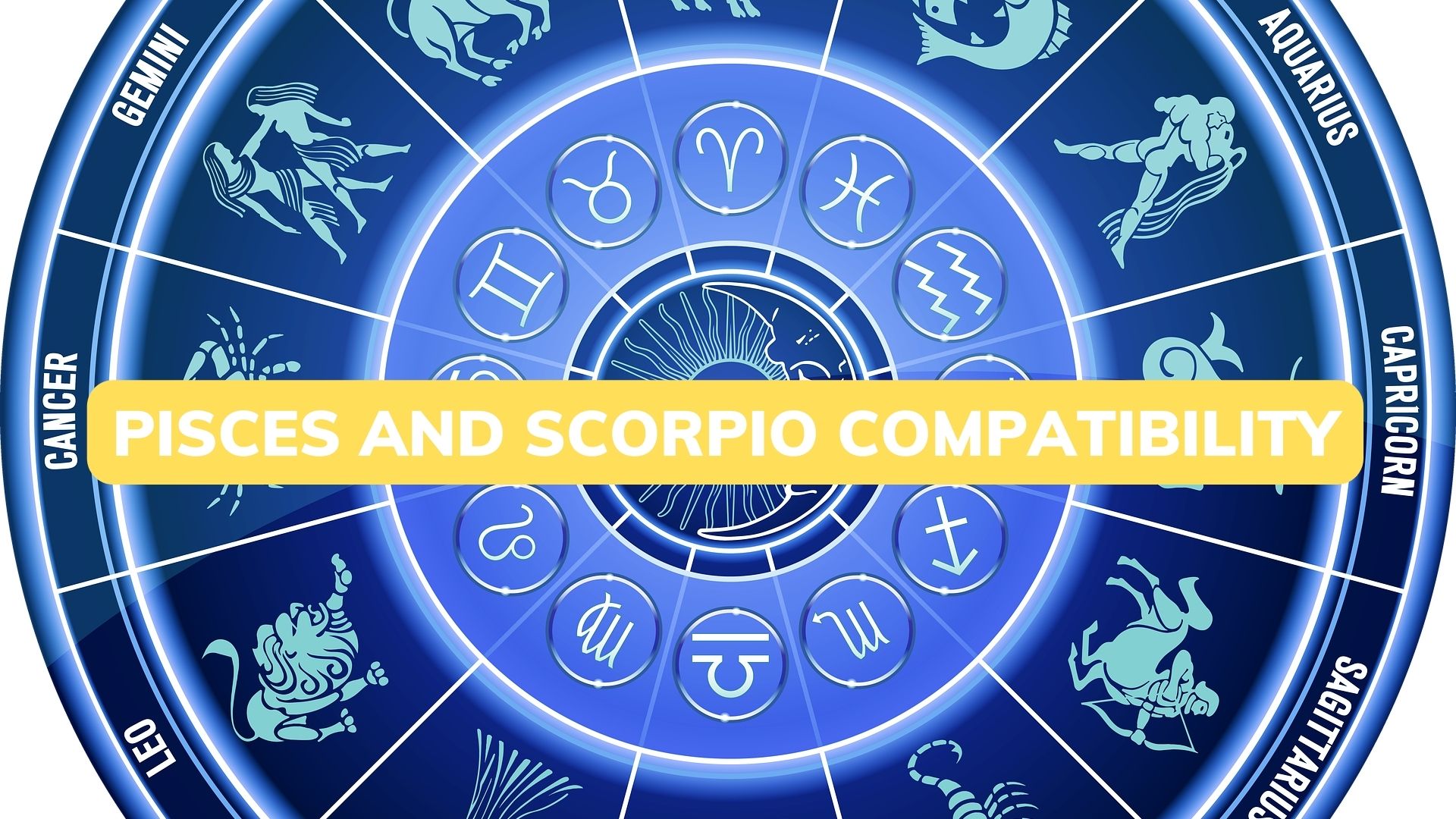 Pisces and Scorpio compatibility is that they have an innate knowledge of one another, even though they are frequently mysterious to others. These two are irresistibly attracted to each other because they feel like they understand each other but don't say it out loud.

They seem to have a psychic connection because they can easily tune into one another's brains. They may not appear to be speaking at all to outsiders, yet they are exchanging a sympathetic emotional frequency that doesn't require words.

They can hear more in silence than most people can in the discussion, and they can instantly tell why the other is upset and what they might require.

Although the scorpion initially seems to be the stronger one, the fish eventually prevails. Scorpios are incredibly strong and resilient, yet their power is mostly founded on ego.

Meanwhile, the foundation of Piscean's power is humility, which no one in the universe can master.

The Scorpion that believes they can rule the fish is in for a big shock. The fish can swiftly reverse the situation and vanish into thin air. If they feel painted into a corner, Pisces can disappear faster than anyone else.

Pisces And Scorpio Compatibility In Friendship

The generosity of the fish is unrivaled. They adhere to nature's ideology. The fish understand that without liberal offering, their gifts would wither away, just as the sun shines on everyone and the trees provide their shade to all without distinction.

Instead of looking for material wealth on the outside, their goal is to find the kingdom of heaven within and share it with people who may not be as spiritual.

Scorpios can be quite parsimonious with everyone else, but they are hospitable with individuals in their inner circle or whom they think are deserving of their hospitality.

The origins of Piscean's generosity would be interesting to consider for the Scorpion, who is naturally quite curious about the mysteries of life. Many false misconceptions can be resolved if people realize where Piscean selflessness and generosity truly originate.

Pisces typically do not worry about the future because they have more than enough to worry about daily. They are prone to get caught up in the drama of their friends', neighbors', and lovers' love affairs, losing sight of their own broader vision and purpose.

While this is going on, the sign Scorpio is very worried about the future and is making emergency plans.

Additionally, they frequently have accurate intuitions about the potentially difficult conditions that await them. Scorpio sees everything as a storm in a teacup, so it won't be easy for Pisces to change his viewpoint.

Scorpios have higher aspirations in terms of education than Pisces, who could downplay the importance of traditional book learning.

They are impressed by formal qualifications, but they prefer to learn from the ether by tuning into the depth of human knowledge through soul memory.

Bed Compatibility Of Pisces And Scorpio

Due to a bittersweet discovery, Scorpios can occasionally become emotional and teary during intercourse.

They are appreciative of the intense intimacy and vulnerability they experience with their spouse but regret that they are unable to develop a comparable connection in their daily lives.

The craziness of the outside world and their fears can easily get the better of these two when they are not physically touching. When people are in love, it might feel like blissful oneness and like the universe is finally making sense.

They can express their dependence on one another and recognize the comfort and delight they bring to one another in the privacy of the bedroom.

Although Pisces may believe that they are pursuing Scorpio, the opposite is true. Scorpios want to be chased and desired more intensely, so even when they act aloof, they are only trying to hide it.

They find it difficult to be entirely honest with one another, but they are nevertheless able to rapidly infer what the other is thinking, even when they act otherwise.

Additionally, keeping some thoughts and feelings to themselves gives their lovemaking an intrigue and mystery element. They are aware that silence conveys more information than words.

Emotions And Pisces And Scorpio Compatibility

Like water, they share a still, intense connection that intensifies as their love does. Even though they may have bad memories of each other, these two water signs can fully commit to each other and let love take over.

Scorpio can pick up on Pisces' ability to forgive. While Pisces is quick to forgive, Scorpio has a hard time swallowing their pride and taking responsibility for their mistakes.

Pisces can also help Scorpio learn to trust people more and have more faith in them, which is important because Scorpio's lack of trust can quickly turn into paranoia.

Meanwhile, Pisces can learn how to handle life's storms from Scorpio. They can also give them confidence, so they don't have to rely on luck to get to the shore safely.

Pisces And Scorpio Compatibility By Percentage

Due to the profound intuitive connection that the two of them share, there are no secrets that can be kept between them.

These two have less of a need to communicate verbally because they share an emotional and intuitive connection.

Pisces, on the other hand, takes a much gentler and more laid-back approach to life, in contrast to Scorpio's emphasis on ambition and power.

Their tired minds and bodies are both calmed and refreshed by their intimate sexual connection.

Scorpio and Pisces have a strong emotional and close bond in their love relationship. They have a deep understanding of each other's thoughts and actions, making these two Zodiac signs appear to be the most sensitive.

Due to Pisces' gorgeous loving deeds and Scorpio's passionate yearning, both are extremely sensitive water signs that form their own unique, beautiful zone.

Scorpio and Pisces are much more likely to get along in a relationship than the opposite sign because they have such strong psychological traits in common. Scorpio's strength would be advantageous to Pisces because it would help them fulfill their goals and aspirations.

Scorpio and Pisces may have misunderstood each other because of Pisces' exceptional delicacy or Scorpio's severity. Both indications are quite observant and prefer to remain alone when given the chance.

Scorpio and Pisces will probably obtain new ideas about psychological potential when they get to know one another. Both of them will be easily seduced by the idea of a magical love, which may keep them around for a very long time.

As two water signs, they will rely on their intuitive judgments to understand one another, resulting in a close relationship. When it comes to their delicate psychological reactions, they can easily comprehend one another.

These two zodiac signs are searching for committed partnerships. They make a great partnership since they share the same objectives and get along well. They have enough trust in one another to express their thoughts and emotions.

Pisces and Scorpio make a wonderful couple. They have the same creative and emotional outlook on life and have a great deal of understanding of one another's emotions and minds.

Scorpios are passionate about their work and enjoy involving Pisces in their endeavors. Scorpio's persistence and depth appeal to Pisces, and both of them are creative enough to find solutions to almost any problem. This makes them a good fit for each other.

Scorpio and Pisces have "wonderful" sexual chemistry. According to expert astrologer and psychic Stina Garbis, "They love to share and unite with one another."

"Scorpio and Pisces use sexual activity as an outlet for their emotions, and they may strengthen their relationships in the process." They cannot find this with other zodiac signs, so regardless of how things turn out, they will always see their relationship as unique.

They can have fantastic sex if they create a solid connection right away. According to Monacan, Pisces is the most inventive sign, and Scorpio is one of the zodiac's most powerful signs.

Together, Pisces' imaginative side and Scorpio's intense passion produce a lot of steam. For each of them, the connection is physically and emotionally satisfying.

Pisces And Scorpio Compatibility In Trust

In a relationship with Pisces, a suspicious Scorpio could quickly turn into a clinging, controlling person. But because they will both be looking for the perfect love, this should bring them closer together.

Because none of these couples can bear the tarnished image of love, their relationship should cease as soon as one of them is betrayed or disappointed.

As long as Pisces has an idealistic outlook and sacrifices all for their genuine love, trust between them will endure.

It may be quite challenging for them to maintain contact with Scorpio's expectation of honesty once their perception is clear, and they recognize who they are with and what their relationship looks like.

Pisces And Scorpio Also The Kings And Queens Of Emotion

Both Pisces and Scorpio are highly sensitive to moods and emotions. Each of us has a sign in our zodiac charts that governs the moon's position and symbolizes our inner wisdom and self-reliance. So, what does it mean if your moon sign is Scorpio or Pisces?

The Moon In Pisces

Mysterious and secretive - Because of their frequent mood swings and difficulty opening out to others, they experience difficulties in their friendships and relationships.

They will provide you with a shoulder to cry on and a listening ear. However, they will never express their feelings or utilize sympathy to make themselves seem more relatable. You are always the focus of the conversation.

Pisces is a very sensitive sign. When their sentiments are injured, they do not cope well. They can harbor resentment for a very long time. They will therefore overwhelm a Scorpio with love until their generosity is taken for granted.

Pisces will separate themselves as soon as they discover they are being used unfairly in a friendship or romantic relationship. They will stop communicating with each other and look for someone who will treat them better.

Scorpios, however, are enigmatic creatures. Due to their mistrust of other people, they frequently keep their emotions to themselves. Scorpios don't confide in others about their feelings.

They will spend hours listening to what others have to say, but they hardly ever share anything about themselves. This may annoy Pisces, but they will find it simpler to penetrate a Scorpio's defenses than most.

They'll soon feel at ease discussing anything and everything with one another.

What Are Some Famous Pisces-Scorpio Couples?

Scorpio blends well with the earth signs of Virgo and Capricorn, as well as the other water signs of Cancer and Scorpio.

Are Pisces And Scorpio Good Matches For Marriage?

Given their strong intuitive telepathy, depth of feeling, and readiness to let go of their egos to the current of love, Pisces and Scorpio are great fits for marriage.

Scorpio counts on Pisces to be a sympathetic listener who can understand and affirm Scorpio's emotions. Although the Scorpio companion can be intense, Pisces who lack decisiveness may benefit from their tenacity.

Because Scorpio and Pisces both value art and spirituality, it is common for them to discuss abstract topics like philosophy.

The close similarities between the two signs can make this friendship challenging at times. They often have conversations that veer off-topic or come up with ideas for initiatives that are far too ambitious to carry through.

Pisces experience everything, and since they become overstimulated, they are unable to hold lengthy, deep conversations as Scorpios can.