Torsion Of The Testis - Reaction After Hydrocelectomy 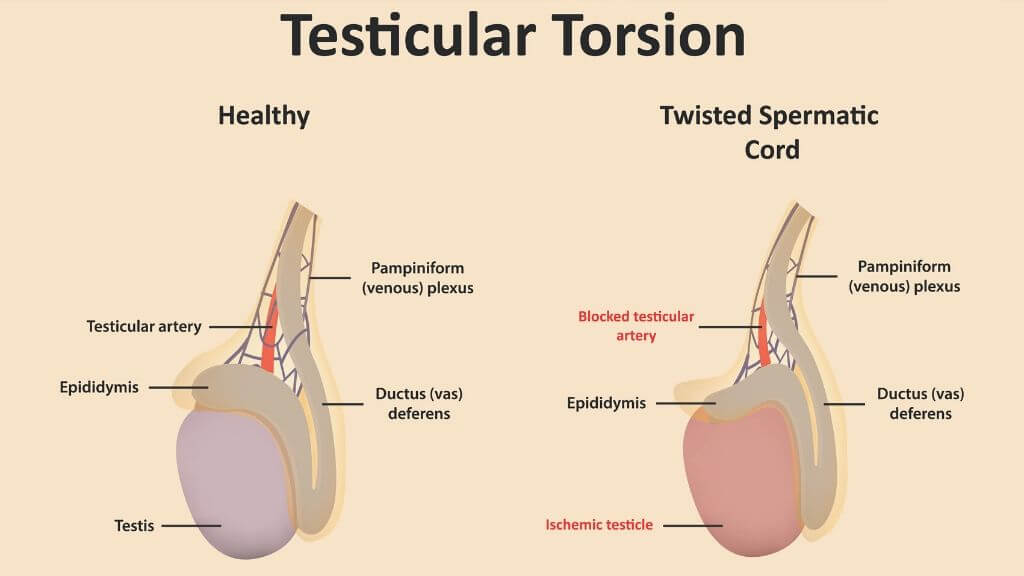 Torsion of the testicle is a relatively uncommon condition that affects males aged 1 to 25 years and has an annual incidence of 4.5 per 100,000.

What Is Torsion Of The Testis?

Testicular torsion is a condition in which the testis and spermatic cord twist or rotate abnormally, causing severe scrotal pain. Delasiauve first described testicular torsion in 1840, and Taylor first reported it in a newborn in 1897.

A hydrocele is an abnormal collection of serous fluid between the layers of the tunica vaginalis. In children, this is the most common cause of painless scrotal swelling.

Hydrocele, on the other hand, can be acquired or congenital. Acquired hydrocele affects 1% of adults, is mostly idiopathic, and 7 to 10% of the time is bilateral. Infection, tumors, filariasis, tuberculosis, and torsion are all potential causes of hydrocele.

Torsion of the testis following hydrocele surgery is not known to occur. It has yet to be documented. It's possible that the reason is that it's never happened before or that it's not reported because the outcome is negative.

The cause of the torsion after hydrocelectomy is unknown. Hydrocele surgery is a routine procedure that is generally considered safe, even in the hands of inexperienced surgeons. The removal of the romovac drain was even considered as a possibility for causing the testis to rotate. Within 6 hours of the torsion, irreversible ischemia sets in. This patient came to see us nearly 48 hours after the onset of acute scrotal pain, by which time the testis had already suffered infarction, necessitating orchiectomy.

We are reporting this case to share an unexpected complication that occurred after a routine procedure, and to emphasize the importance of being vigilant and thoughtful about the possibility of such an event occurring after a hydrocelectomy.

The majority of cases are caused by the bell clapper deformity, an anatomical abnormality that affects some males. The spermatic cord can twist more easily due to this anatomical condition, compromising the blood supply to the testicle. This can happen on its own or be linked to a traumatic experience. There is no way to detect this deformity. This anatomical abnormality is found in both testicles in a large percentage of men.

What Are The Signs And Symptoms Of Testicular Torsion?

Excruciating one-sided testicular pain with sudden swelling is a symptom of testicular torsion. The testicle elevates due to the twisting of the cord structures (like the strings of a puppet). Patients may have nausea and vomiting. Patients may also have abdominal pain. It's possible that you've had previous testicular pain. The pain in the testicles may be accompanied by a fever.

Testicular torsion is most common in men between the ages of 12 and 18, with the majority of cases occurring in men under the age of 30. It can, however, happen at any age, even in newborns.

What Are The Exams And Tests To Diagnose Testicular Torsion?

A painful scrotum with one-sided testicular swelling and elevation is seen on a typical physical exam of a torn testicle. A urinalysis and blood count are two common lab tests. One or more radiologic studies could be used to image the scrotum. A Doppler ultrasound of the testicles or a nuclear scan of the testicles may be used to determine the degree of blood flow. Imaging may not be performed depending on the physical exam and/or time frame, as immediate treatment is required to save the testicle.

A 44-year-old man had been suffering from bilateral scrotal swelling for more than 5 years when he came to see us. He had excision and eversion of the sac after being diagnosed with bilateral primary vaginal hydrocele. The patient was comfortable on postoperative day 1. He was discharged after his drain had been removed. He had severe pain and swelling in his right scrotum three days after surgery. The patient was self-medicating and came to see us on the fifth day with severe scrotal pain, swelling, and a fever.

The right side of the scrotum was swollen and red at the time of the examination. There was a rise in temperature and tenderness in the area. His testis could not be felt. The left testis was palpated and found to be unresponsive. Suture lines appeared to be in good condition.

A scrotal ultrasound was performed immediately, which revealed an avascular right testis with diffuse scrotal oedema and enlarged testis. The left testis appeared to be normal.

An emergency scrotal exploration was performed on the patient while he was sedated. Torsioned testicles were avascular and gangrenous. He underwent a right orchiectomy. The patient refused to have a left orchiopexy performed.

What Is The Most Serious Complication Of Testicular Torsion?

When testicular torsion is not treated for several hours, the testicle can suffer permanent damage due to blocked blood flow. It is necessary to remove the testicle surgically if it is severely damaged.

Can Hydrocele Cause Testicular Torsion?

The mechanism behind hernia sac torsion or scrotal hydrocele is unknown. According to Shiraishi et al., these disorders may arise from a bell-clapper deformity, in which the hydrocele remains loose or has slight adhesion, allowing for torsion.

Can You Accidentally Get Testicular Torsion?

When the testicles twist as a result of an injury or accident, this is known as testicular torsion.

What Happens After Hydrocele Surgery?

For several days after your surgery, you may feel more tired than usual and experience mild groin pain. Your groin and scrotum may be swollen or bruised. This usually improves in two to three weeks. You should be able to return to work or school four to seven days after surgery.

Torsion of the testis following hydrocelectomy is a very rare complication that has never been reported. When a patient develops acute pain after hydrocelectomy, this rare occurrence should be considered. The testis undergoes complete gangrenous changes as a result of the delayed presentation, which necessitates orchiectomy.