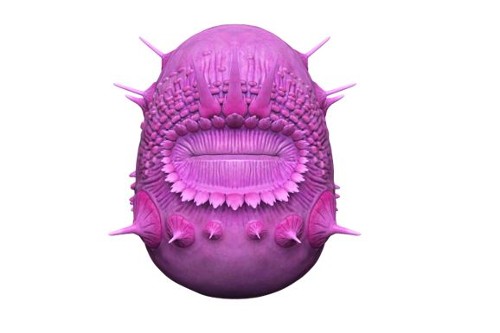 As was previously believed, a tiny creature with no anus dating back around 530 million years is not the earliest member of a diverse animal group that encompasses everything from starfish to humans.

Even though Saccorhytus coronarius lacked an anus, it was covered with holes, including a ring of tiny ones around its gaping mouth. Those apertures have previously been interpreted as primitive gills utilized for breathing.

The existence of gill slits seems to have firmly placed the creature in the deuterostome branch of the animal kingdom. The reclassification came about because of new 3D imagery showing how much like a minion it really is.

Noseless "angry Minion" dinosaurs are more closely related to penis worms and mud dragons than they are to humans. Saccorhytus coronarius, which dates back 500 million years, was previously associated with deuterostomes, an animal group that gave rise to vertebrates and humans.

A different group of scientists has come to the conclusion that it is an ecdysozoan, which comprises insects and marine invertebrates. According to a paleobiologist who was not involved in the research, there is still some space for interpretation with this species.

When S. coronarius was originally described in 2017, researchers assumed that the openings around the creature's mouth were pores, a possible ancestor to what would become gills.

The most recent research shows that S. coronarius did have spines that came out of these holes, but they broke off when the animal turned into a fossil. No matter what group Saccorhytus is in, the fact that it doesn't have an anus is important because it shows how body shapes have changed over time.

Donoghue remarked that scientists still had a lot to learn about these ancient species, including whether or not S. coronarius spends its days hunting for food in silt on the sea bottom.

According to a study published August 17 in Nature, researchers were able to create a 3D model of the half-millimeter-long species using fossil imaging data, revealing that the holes were really the fragmented remains of spines.

Since the spines could be positively identified, the organism was moved from the class Protista to Ecdysozoa, which includes arthropods and nematodes. There is a lot of difficulty in identifying biological traits in fossils because of the drastic changes that may occur over millions of years.

According to paleontologist Philip Donoghue of the University of Bristol in England, the majority of S. coronarius fossils have been flattened "like a really sad balloon that's folded in on itself." He claims the 3-D reconstruction makes S. coronarius come to life, despite the fact that it looks like an angry minion.

Numerous S. coronarius fossils were X-rayed by Donoghue and his colleagues to show the progression of the fossils' decomposition. From what can be seen in the pictures, the skin's inner layer previously broke through pores and formed spines. After being fossilized, the inner layer was taken away, leaving behind the empty spaces.

Spines help place S. coronarius in its new group, but the mystery of its missing anus remains. It's not strange because of its lack; numerous animals, including jellyfish that regurgitate their food, have evolved without it.

Since neither deuterostomes nor ecdysozoans usually have anuses, it is hard to put S. coronarius in either group.