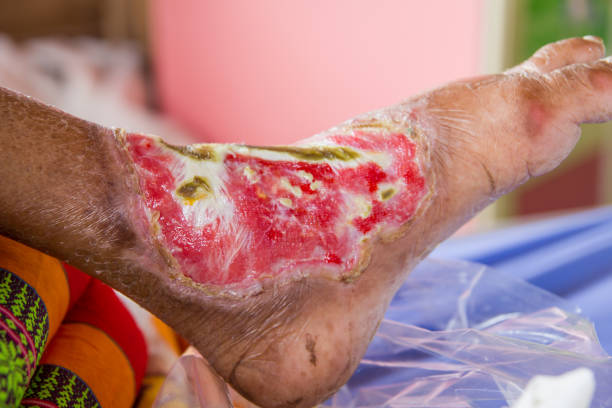 Necrotizing fasciitis (NF) is a serious, uncommon, and sometimes fatal soft tissue infection affecting the scrotum, perineum, the abdominal wall, or the extremities. Because the disease spreads quickly and septic shock might occur, the fatality rate is significant (median mortality 32.2 percent ).

Based on microbiological discoveries, necrotizing fasciitis is categorized into four kinds. The majority of cases are polymicrobial, classified as type I.

The patient's clinical condition ranges from erythema, edema, and soreness in the early stages of infection to skin ischemia with blisters and bullae in the latter stages.

The patient is severely unwell in its fulminant phase, with signs and symptoms of acute septic shock and extensive organ failure. The essential information for diagnosis is the clinical state.

What Is Necrotizing Fasciitis?

Necrotizing fasciitis (NF), often known as flesh-eating disease, is a bacterial illness that destroys soft tissue in the body. It is a severe illness with a fast start and rapid spread. In the afflicted region, extreme pain, fever, and vomiting are common symptoms in red or purple skin. The limbs and perineum are the most usually afflicted locations.

The infection usually enters the body via a breach in the skin, such as a cut or burn. Poor immunological function, such as diabetes or cancer, obesity, alcoholism, intravenous drug use, and peripheral vascular disease are also risk factors. It usually does not spread between individuals.

The sickness is categorized into four categories based on the organism that causes it. More than one species of bacteria is involved in between 55 and 80 percent of cases. Up to one-third of patients contain Methicillin-resistant Staphylococcus aureus (MRSA). Medical imaging is often used to confirm a diagnosis.

Handwashing and wound care may help to avoid necrotizing fasciitis. Surgery to remove the affected tissue and intravenous antibiotics are frequently used to treat it. A mixture of antibiotics, such as penicillin G, clindamycin, vancomycin, and gentamicin, is often utilized. Surgery delays are connected with a substantially increased risk of mortality. Despite high-quality care, mortality is between 25% and 35%.

Both sexes are equally impacted. It is more prevalent in elderly persons and uncommon in children. It has been described at least since Hippocrates' time. The term "necrotizing fasciitis" was coined in 1952.

The yearly incidence of necrotizing fasciitis is estimated to be 500-1,000 cases yearly, with a worldwide frequency of 0.40 per 100,000 people. It seems to favor males, with a male-to-female ratio of 3:1; this ratio is mainly attributable to the greater prevalence of Fournier's gangrene in men. According to Anaya et al., infection of the lower extremities is the most prevalent location of necrotizing fasciitis (57, 8%), followed by the abdomen and the perineum.

Bacteria may enter the body through a cut, scrape, or surgical site. These wounds do not have to be severe for the bacteria to take hold. A needle puncture may be sufficient.

The traditional trio of symptoms associated with necrotizing fasciitis is local discomfort, swelling, and erythema. Tenderness, sclerosis, skin necrosis, and hemorrhagic bullae may be seen at the infected location. The patient is severely sick in the fulminant stage of the illness, with signs and symptoms of acute septic shock, multiple organ failure syndromes, and widespread soft tissue necrosis. The subacute type of the illness has a sluggish clinical course that might last for days or weeks. The most recurring sign of early necrotizing fasciitis is pain that is not proportional to edema or erythema.

Once clinical indications arise, the look mimics the late stage of necrotizing fasciitis, with apparent bruises, bullae, and cutaneous necrosis owing to the necrotizing process's expansion—additional necrosis of the superficial fascia and fat results in crepitus and a thin watery malodorous discharge. Fournier's gangrene has a significantly distinct clinical history; it commonly starts with the perineum, scrotal skin discomfort, and itching.

Typically, laboratory tests in this condition are not specific. Certain laboratory results may assist the doctor in distinguishing necrotizing fasciitis from other skin illnesses, such as necrotizing soft tissue infection. Leukocytosis is a frequent symptom of necrotizing fasciitis (NF), and a white blood cell count of more than 20,000/L is highly suggestive. Blood urea nitrogen levels more than 18 mg/dL and serum creatinine levels greater than 1.2 mg/dL indicate continuing renal failure, which is common in these individuals. This condition is distinguished by the presence of distinctive "dishwater pus," as well as a lack of bleeding and tissue resistance to blunt finger dissection.

Imaging studies may aid in diagnosing necrotizing fasciitis, particularly in equivocal instances. Although plain radiography has limited sensitivity and specificity, it may detect gas production in soft tissue, which is present in about half of all patients and strongly implies Clostridium species infection. CT and MRI scans are more sensitive and specific than conventional radiography. The degree of tissue infection, fascial edema, inflammation, and gas formation may all be shown by a CT scan. Although more accurate than CT, an MRI scan is not routinely utilized owing to expense.

Ultrasonography is another viable alternative, giving essential information about the type and degree of infection, mainly when the diagnosis is ambiguous. The most crucial result in diagnosis is hyperechoic foci with reverberation artifact and filthy shadowing at the site of infection, reflecting subcutaneous gas. However, ultrasonography requires a highly experienced operator, limiting its usage in the ICU, where patients with necrotizing fasciitis are often treated.

Depending on its history, gram stain, and culture, a polymicrobial infection should be treated with antibiotics. Anaerobic coverage is critical for type 1 infection; effective antimicrobials include metronidazole, clindamycin, and carbapenems (imipenem). Antibiotics against S. pyogenes and S. aureus, which commonly coexist with the former, are used to treat type 2 illnesses.

As an initial empirical treatment, broad gram-negative coverage is required for newly treated patients. Clindamycin and penicillin, which cover Clostridium species, should be used to treat type 3 necrotizing fasciitis. If a Vibrio infection is detected, using tetracyclines and cephalosporins as soon as possible is critical for survival. Amphotericin B or fluoroconazoles may treat type 4 necrotizing fasciitis, although the outcomes are often poor. Intravenous immunoglobulin (IVIG) has been reported as a viable approach for neutralizing streptococcal toxins.

Surgical intervention is life-saving and should be done as soon as feasible. In fulminant necrotizing fasciitis, a delay in treatment of more than 12 hours might be deadly. The significant features of surgical therapy include surgical debridement, necrosectomy, and fasciotomy. Necrotizing fasciitis patients should be thoroughly watched over the following 24 hours. A "second-look procedure" with severe surgical debridement is required for complicated surgical wounds.

The affected body location determines the amount of tissue taken metabolic needs are comparable to other severe traumas or burns. Necrotizing fasciitis of the abdominal wall needs particular attention. Serial dressing changes are required in the days after surgery. In situations of infection advancement, aggressive surgical debridement should be repeated.

In diffuse peritonitis, Hartmann's resection is regarded as the best option. A pressure sore, perineal abscess, or paraplegia are all common risk factors for infection spreading to the scrotum, inguinal area, and lower abdominal wall. An orchiectomy, cystostomy, or diverting colostomy is often necessary. Wide tissue incision, drastic debridement, and draining of the affected regions are all part of the surgical therapy. Despite the appearance of normal soft tissue, people with necrotizing fasciitis have widespread vascular microthromboses as well as vasculitis.

Amputation is often seen as a less invasive treatment with less blood loss than radical debridement. Patients with hypotension and shock benefit from amputation because they cannot tolerate subsequent lengthy surgeries.

How Do You Get Necrotizing Fasciitis?

You must have the bacteria in your body to have necrotizing fasciitis. This usually happens when the skin is broken. Bacteria, for example, may enter your body via a cut, scrape, or surgical site. These wounds do not have to be severe for the bacteria to take hold.

Where Is Necrotizing Fasciitis Most Commonly Found?

What Are The First Signs Of Necrosis?

Pain, warmth, skin redness, or swelling around a wound if the redness spreads quickly. Blisters on the skin, often with a "crackling" feeling under the skin. Pain from a skin wound combined with symptoms of a more severe illness, such as chills and fever. A grayish, odorous liquid is seeping from the incision.

How Do You Recognise Necrotizing Fasciitis?

Intense pain or loss of sensation around a cut or wound - the agony may seem to be much greater than you would anticipate from a cut or wound. Skin swelling surrounding the afflicted region. Flu-like symptoms include a high fever, headache, and fatigue.