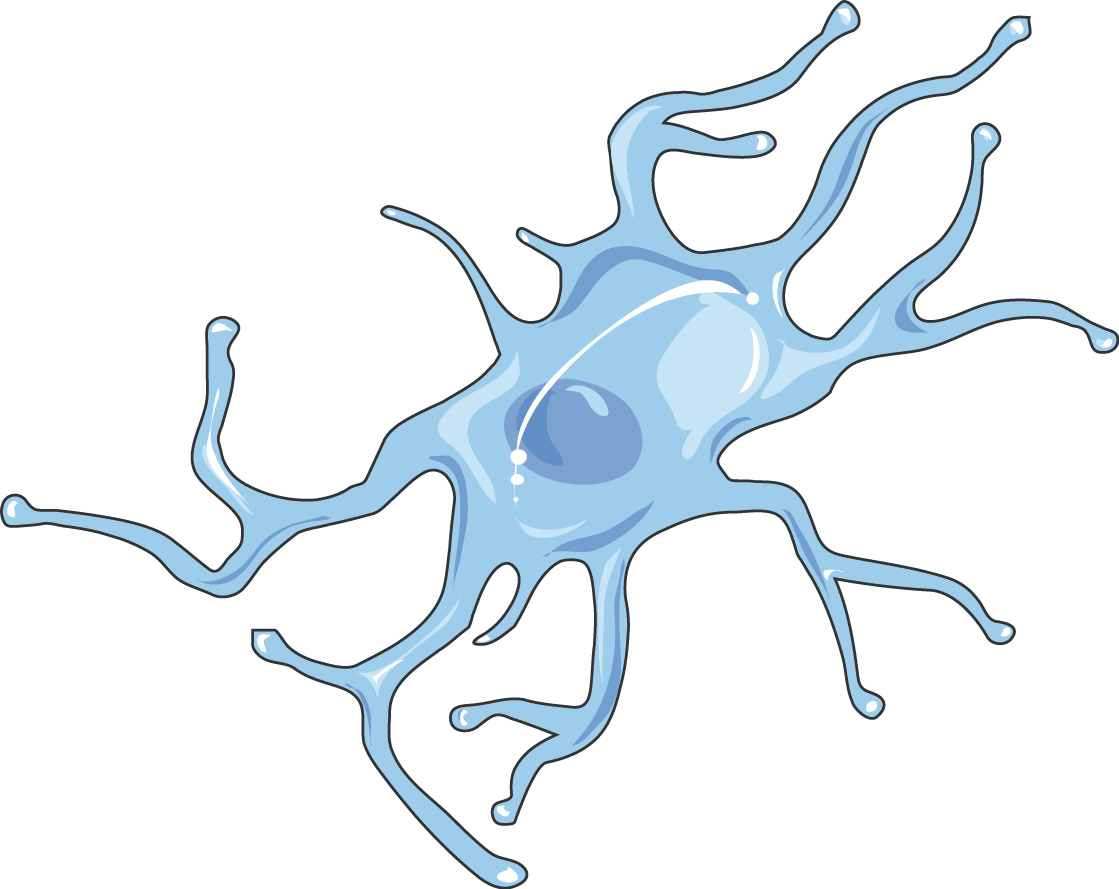 A double-edged sword function of microglia activation is highlighted in this article, as microglia can be both pro-survival and pro-death in the wake of TBI.

New and existing inflammation-based biomarkers for the treatment of TBI have been presented, which may improve regenerative capacity and reduce degenerative events linked to microglial response.

Neuroprotection is provided by microglia, which phagocytose abnormally penetrate foreign particles and encapsulate them in their own cell bodies.

The phagocytic capability of microglial cells likewise declines with age.

TBI and associated co-morbidity factors have a propensity to progress in their clinical symptoms, which makes it difficult to create medicines that target microglial activity.

To put it another way, a traumatic brain injury (TBI) occurs when an object penetrates the skull and damages brain tissue after being struck by a forceful blow, jolt, impact, or jolt to the head.

How Is Microglia Defined?

They fight off and phagocytize foreign invaders, and they clear cellular debris to aid wound healing in the CNS, just like myelomonocytic, which are the innate immune cells in all mammalian organs, including the brain. The liver, lungs, and skin are home to a small number of innate immune cells. Microglia, on the other hand, are found throughout the central nervous system in a tiling-like pattern throughout the brain and spinal cord. Because microglial cells occupy the whole adult mammalian brain, it is clear that they perform specialized activities in the brain.

Bone marrow-derived monocytes were formerly assumed to be the source of microglial cells. A stem cell in the yolk sac has been identified as the source of microglia, which share many traits with blood-borne monocytes. Brain microglial progenitors initially exhibit ameboid morphologies when they first populate during early fetal development. Neurons are overproduced in the CNS during brain development in order to ensure that the right connections are created between neurons. While microglia do not directly kill neurons that lose this competition, they recognize their malfunction or degeneration and eliminate them.

TBI and other neurological diseases, as well as aging and degenerative diseases like Alzheimer's and Parkinson's, have been linked to increased activation of the immune system in the central nervous system (CNS). A study of microglia phenotypes found that there are three distinct types: I resting, ramified; (ii) activated, non-phagocytic [or antigen presenting cell (APC)-like] in areas of CNS inflammation; and (iii) reactive microglia, which contain phagocytic microglia in response to injury or infection (based on developmental and pathophysiologic studies). macrophages and microglia can polarize into two primary subtypes, M1 and M2, depending on their level of activation.

Excessive production of proinflammatory cytokines by the M1 subtype increases cell-mediated immunity. High amounts of interferon-gamma (IFN-γ), tumor necrosis factor (TNF-)-α, interleukin-1, IL-12, and low levels of IL-10 characterize this condition. When microglia come into touch with HIV proteins, the M1 phenotype may be induced (such as transactivators of transcription [Tat] bind toll-like receptors 3 or 4 as well). Anti-inflammatory IL-10 and TGF-β, and repressor of cytokine signaling are produced by "alternatively activated" or M2 microglia, which decrease inflammation and clean cellular debris (including amyloid plaques) (SOCS). They are both microglial phenotypes that fall under type ii or iii. A cycle-like phenotype is reinforced by the conditions that drive polarization to M1 or M2.

The cytokine profile of activated microglia may be manipulated by strategies that target specific molecules. It is possible to promote the survival of neurons following injury with the use of a number of different chemicals. In vitro, granulocyte-macrophage colony stimulating factor (GM-CSF) and colony stimulating factor 1 (CSF-1) have been shown to be effective stimulants for microglia. Early immediately after damage, microglia may begin generating neuroprotective chemicals (including IL-10, IL-1ra, and TGF-β) in response to appropriate signaling cues. Proinflammatory cytokines are suppressed right away as a direct result of these substances. Neuroprotective properties of TGF-β include better function, reduced lesion size, and decreased iNOS generation following damage, all of which have been linked to the growth factor.

Microglia's phagocytic activity, which may prevent the degeneration of neurons, is also an attractive feature. Early post-TBI microglial phagocytic activation may slow the dissemination of cell death signals to injured neurons and other nearby cells. Furthermore, numerous studies have shown that cell autophagy is neuroprotective following a traumatic brain injury (TBI). After a brain injury, neighboring neurons and astrocytes are able to remove cell debris from the affected area. Researchers have found an increase in autophagosomal formation proteins in neurons and astrocytes after TBI at 1-h, 3-h, and 32 days, including microtubule-associated protein 1 light chain 3 (LC3) and beclin 1. This may be because autophagy also removes healthy cells along with the damaged ones, which might increase the clinical symptoms of TBI. The phagocytic activity of microglia, therefore, must be regulated in order to slow the progression of TBI pathology, while preventing its detrimental side effects.

Researchers should concentrate their time and resources to finding biomarkers for TBI, which will aid in the development of treatments for TBI, because the timing of treatment will be dictated by secondary cell death as caught by innovative biomarker methods.

The discovery of specific proteins that regulate microglia (e.g., BDNF) through cytokine profiling of microglial cells may provide insights about the condition of the TBI patient by detecting these proteins in the blood or CSF. Finding proteins that control microglia response to TBI by unraveling their cytokine and chemokine profiles could lead to the discovery of previously unknown cytokines and chemokines in activated microglia. Paracrine and autocrine functions, as well as cytokines, chemokines, and neurotrophic/tropic substances, must be addressed in this approach. Determining the cytokine profile of TBI-induced activated microglia may provide fresh information on previously used neuroprotective strategies. Blood, plasma, or cerebral spinal fluid (CSF) measurements of these well-known proteins may be used in human clinical settings to provide information on the health of TBI patients. When it comes to neurointensive care, a bedside monitor such as cerebral microdialysis can give real-time examination of brain tissue biochemistry.

Using brain tissue microdialysis to monitor acute and chronic TBI is possible if future research are able to uncover an overlap between the microglial cytokine profile and the microdialysis data analysis. Biomarkers identified in rat models of TBI that should be included in microglial profiling and total brain tissue profiling by a microdialysis include tyrosine kinase, poly(ADP-ribose) polymerase-1, and primary myeloid differentiation response protein 88 (PMP88). In addition to this developing cytokine profile, high-throughput screening tests (e.g., microRNA analysis) using blood, CSF, or tissue samples from TBI patients and animal models may uncover novel cytokines and related proteins.

Microglia's phagocytic profile may highlight NPCs and stem cells' intimate molecular and cellular connection. Microglia's phagocytic activity can also be measured using imaging modalities such as functional MRI. Microglia, NPCs, and stem cells all have phagocytic profiles that may reveal immunomodulatory proteins that could help us better understand how these cell types' modulatory and phagocytic functions overlap. Imaging modalities (e.g., functional MRI) can be used to monitor NPC or stem cell levels in order to offer real-time status of microglia's phagocytic activity As an alternative, we may try to link known phagocytic indicators (such as LC3) to markers for apoptosis and inflammation in the TBI brain to determine if there is a link between the three. Time-dependent gene expression alterations have been found in 23 apoptosis-related genes following lateral mild fluid percussion damage in adult rats, including IL-1-α, IL-1-β and TNF, which rose promptly at 3 hours after the injury. As a result, these time-dependent gene expression profiles shed light on the course of apoptosis, a secondary phase of cell death that was linked to inflammation in this study.

Assessing The Level Of “Proinflammatory Response Of Microglia”

Blood/CSF assays could be used to determine the degree of "proinflammatory response of microglia." Pro-inflammation that is therapeutic (i.e., serving as a signaling cue for stem cell migration from the periphery to the brain) but has not yet reached a level that may trigger the neuroinflammatory response responsible for exacerbating TBI clinical symptoms is depicted below. If, for example, S-nitrosoglutathione (GSNO) is measured, it could disclose brain levels of peroxynitrite and oxidative metabolites, which when reduced levels are observed may indicate that the neurovascular unit integrity is being protected. Synaptic plasticity may be strengthened because of increased neurotrophic factors produced by long-term GSNO therapy at low levels. Peroxynitrite and other reactive oxygen species as well as neurotrophic factors can be used as surrogate markers of GSNO in order to better understand how TBI affects neurovascular health and synaptic plasticity in the brain..

What Does Microglia Activation Mean?

Glial cell activation, inflammatory chemical release, increased permeability of the blood-brain barrier, and migration of peripheral immune cells into the brain are all features of this condition. Microglia, the central nervous system's resident immune cells, play a key role in neuroinflammation.

What Does Microglia Activation Release?

Neuronal loss accumulates over time when microglia are activated by a single stimulus (e.g., lipopolysaccharide or neuronal injury) or many stimuli.

How Can Microglial Activation Be Reduced?

Through intracellular signaling pathways such MAPKs, PI3-K/Akt and glycogen synthase kinase-3β (GSK-3β) pathways, resveratrol has been demonstrated to suppress microglial activation and lower the generation of pro-inflammatory chemicals.

Microglia's phagocytic activity is a key survival trait. Insights into homeostatic processes for maintaining a healthy brain will be gained by identifying the signaling factors that nurture microglia to sustain their regenerative function after injury rather than the predominating inflammatory activity (e.g. neuroinflammation).

The ability of microglia to migrate to the site of injury is an intriguing trait that requires additional research. However, little is known about the migratory processes used by flourishing microglia to populate the CNS once they reach the wounded brain. Research into the molecular cues that control the anti-inflammatory response will lead to the development of effective treatments to lessen the harmful effects of microglial activation and redirect their function towards microglia-based therapeutics for TBI.